Storylines To Watch At UFC 270: Ngannou vs Gane

Take A Look At Three Storylines That We Are Paying Attention To Heading At UFC 270: Ngannou vs Gane
By Gavin Porter, On Twitter @ItsGavinPorter • Jan. 20, 2022

The UFC’s first pay-per-view event of the year is a good one, boasting two title fights on opposite ends of the weight class spectrum along with a great mix of UFC debutants and prospects.

UFC heavyweight champion Francis Ngannou and interim titleholder Ciryl Gane will determine who the undisputed baddest man on the planet is, while UFC flyweight champion Brandon Moreno looks to defend his belt against Deiveson Figueiredo in their third bout against one another.

Both championship fights have plenty of anticipation behind them, but that’s not the only thing we’re paying attention to.

Here are the UFC 270 storylines that we are following this week.

The Stage Is Set For Eight Athletes To Make Their Debut

Dana White’s Contender Series has always been a great way for the UFC to find talented athletes to add to the roster and there’s evidence of that all over UFC 270. Saimon Oliveira, Michael Morales, Genaro Valdez, Jasmine Jasudavicius and Jack Della Maddalena are all making their debuts after securing contracts on DWCS. This next wave of DWCS grads loves that their first walk to the Octagon will be on such a marquee event and they will look to impress right off the bat.

In addition, Andre Fialho, Victor Henry and Pete Rodriguez are also making their debuts after battling their way through other promotions and jumping at short-notice opportunities.

Anaheim Is The Home Of Epic Heavyweight Title Fights

When Ngannou and Gane compete for the undisputed heavyweight title, it will be the eighth time that UFC has hosted a UFC event in Anaheim, CA. Four of those events were headlined by heavyweights competing for the UFC heavyweight championship.

The first time was all the way back in 2006, when Tim Sylvia fought Andrei Arlovski at UFC 59, which was followed by Brock Lesnar vs Cain Velasquez at UFC 121. Just over a year later, Velasquez was back in action in Anaheim when he was defeated by Junior Dos Santos. Then in 2019, Daniel Cormier and Stipe Miocic met for the second time at UFC 241.

All four of those heavyweight title fights ended via knockout, with only DC vs Moicic making it past the first round.

If Ngannou vs Gane is anything like the other four Anaheim heavyweight title bouts that have proceeded UFC 270, fight fans are in for treat.

Keep Your Friends Close And Your Enemies Closer 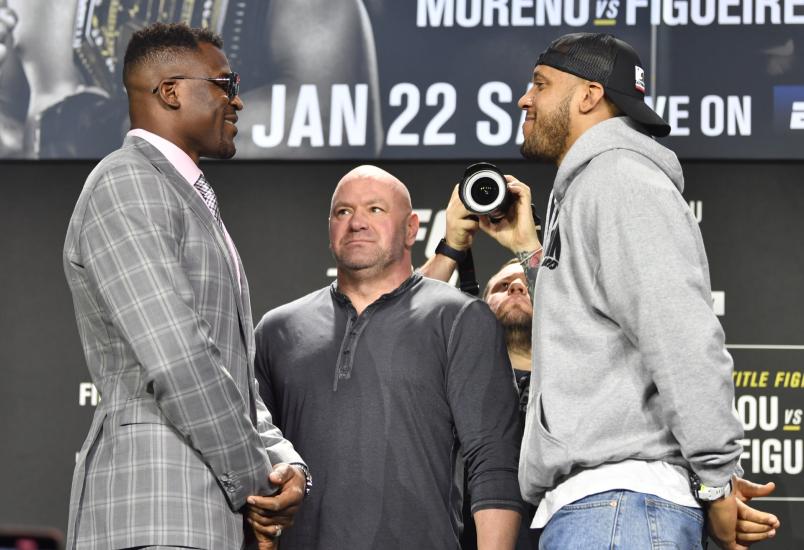 Francis Ngannou of Cameroon and Ciryl Gane of France face off during the UFC 270 press conference at the Anaheim Convention Center on January 20, 2022 in Anaheim, California. (Photo by Chris Unger/Zuffa LLC)

Both of UFC 270’s title fights have very interesting storylines that go beyond what’s happened inside the Octagon.

It’s been well documented that Ngannou entered the UFC and found success under the MMA Factory Paris banner. Head coach Fernand Lopez and Ngannou decided to go their separate ways after Ngannou moved to Las Vegas. On a visit back to the MMA Factory Paris he had a few training sessions with Gane, who was fighting in the TKO promotion in Canada at the time.

It became very clear, very quickly that Gane was special and that he is a real threat to Ngannou’s title. Around that time, sparring footage of Ngannou and Gane was released, fueling speculation.

So, to serve it up in a simple way, there is plenty of background noise in this fight. It will be interesting to see which fighter can block out that noise, rise to the occasion and leave the Honda Center with that belt around their waist.

In the flyweight title fight, Moreno and Figueiredo have shared the Octagon twice and know each other very well. With one title fight draw and one clear-cut result, legacies are on the line for each of them. The added storyline to this fight came when Figueiredo moved to Arizona to start working with Henry Cejudo.

The former flyweight and bantamweight champion used to be close friends and training partners with Moreno; they even lived together for a time. But then Moreno moved to Las Vegas and assisted Joe Benavidez in preparing for a fight with Cejudo. That created a little drama and Figueiredo, who spent these four months away from his family in AZ with Cejudo, wants to help ‘Triple C’ get revenge.

It’s a dynamic that no one saw coming, but it certainly is something that’s on the mind of the challenger.