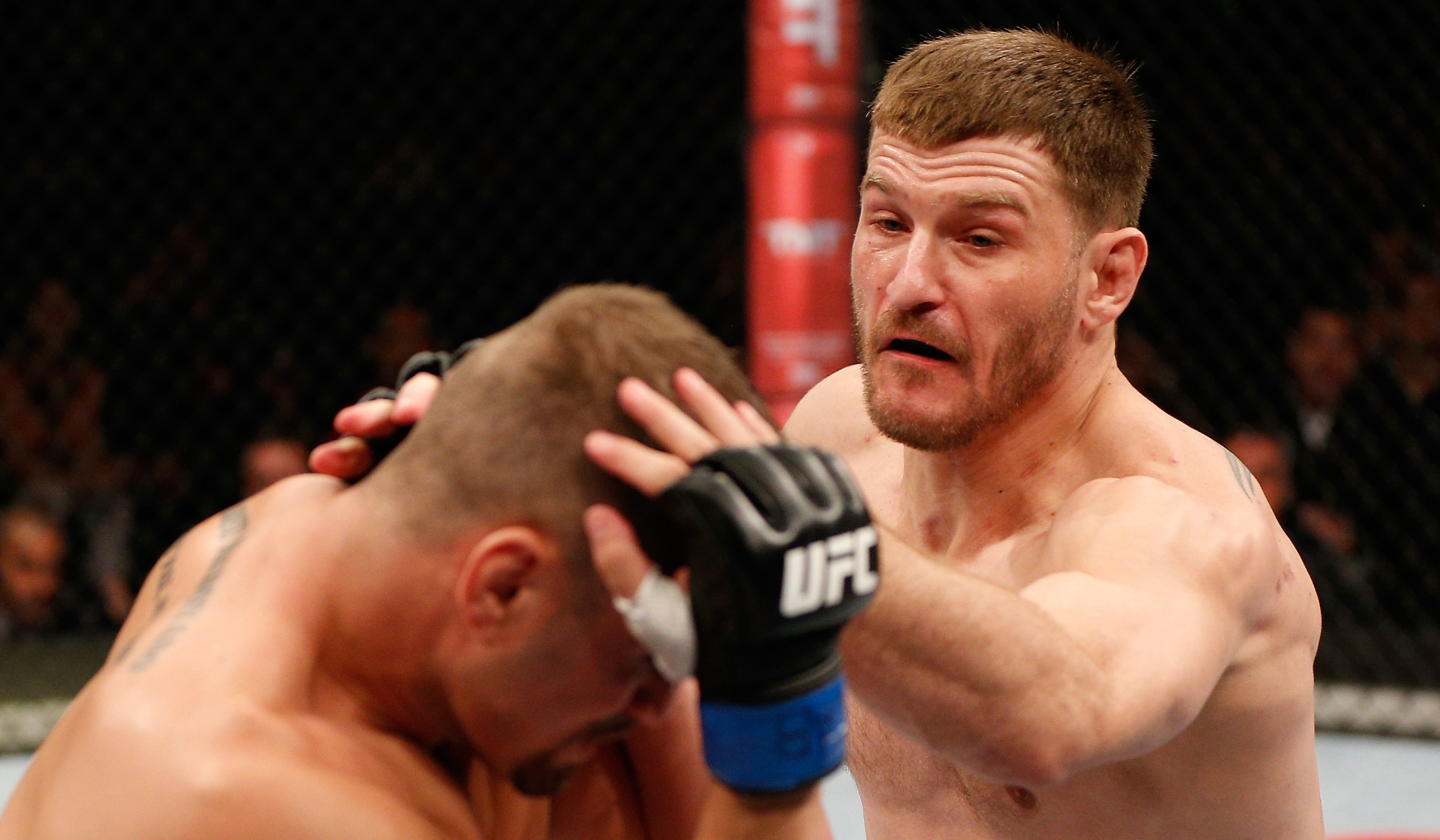 Originally scheduled to face former UFC champion Junior Dos Santos in the UFC Fight Night main event at Ginásio do Ibirapuera in Sao Paulo Saturday night, heavyweight contender Stipe Miocic had a lot to lose against 205-pound strongman Fabio Maldonado. But instead of faltering against the Brazilian hero, he came up big, knocking out his steel-chinned foe in less than a minute.

“I was real nervous,” said Miocic. “That guy is a tank. I needed to get my shots in, I got an open break and it was a good shot. Tonight was my night.”

A left hand hurt and staggered Maldonado almost immediately, with Miocic stepping back and letting his resilient foe off the hook, knowing the Brazilian’s reputation for roaring back from the brink of defeat to win. But a subsequent right hand put Maldonado on the deck, and now the Ohioan knew that the end had arrived, with a series of hammerfists confirming it, as referee Mario Yamasaki stopped the fight at the 35-second mark, silencing the crowd in the process.

With the win, the number seven-ranked Miocic improves to 12-1; Florianopolis’ Maldonado falls to 21-7.

The only member of Team Wanderlei to make it to the Ultimate Fighter Brazil 3 finals, Antonio Carlos Junior did his coach proud, winning a three round unanimous decision over Vitor Miranda to take the season’s heavyweight title.

Carlos Junior (5-0) was on from the opening horn, mixing up his strikes and grappling well to keep Miranda from getting a read on what he was going to do next. And though Miranda rallied in the closing moments of the round, it was clearly a frame for “Cara de Sapato.”

As the bout strayed to the mat early in round two, Carlos was in his world, smoothly moving into the mount. Miranda (10-4) was able to get into half guard, and then back to his feet, before moving into the top position, subsequently bulling his opponent to the fence. Carlos fought back to his feet and broke loose, getting a quick combination off before the horn.

The third round belonged to Carlos, who dominated on the mat, putting a stamp on his TUF title, an impressive feat for someone who only made his pro MMA debut in July of 2013.

He may not be ready for Chris Weidman or Johny Hendricks, as his Ultimate Fighter Brazil 3 coach Chael Sonnen claimed, but Warlley Alves is a name we will likely be hearing a lot of in the coming years, as he became the reality show’s middleweight winner with a third round submission of Marcio Alexandre. 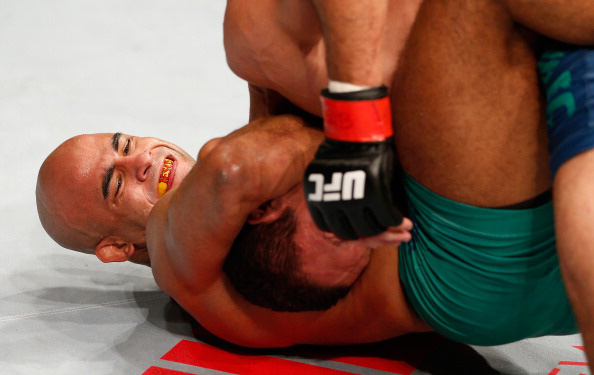 After Alexandre scored with a high kick to start the bout, the 23-year-old Alves dropped him with a powerful right hand that didn’t even appear to land flush. Alexandre recovered quickly and got back to his feet, the two locking up against the fence for a spell before an Alves takedown which landed him in side control. “Lyoto” again rose, but he couldn’t break the grip of his TUF Brazil 3 teammate. With 90 seconds left, referee Mario Yamasaki restarted the action, but Alves got back to mauling Alexandre, wrapping up an impressive first frame.

Alves’ grappling game continued to impress in round two, with Alexandre simply getting overpowered by the Rio de Janeiro product both on the ground and in the clinch. And in round three, Alves finished matters, hurting Alexandre with a right hand before putting his opponent to sleep with a guillotine choke that halted the bout 25 seconds into the final frame.

Alves improves to 8-0 with the win; Florianopolis’ Alexandre falls to 13-1.

Drawing welterweight contender Demian Maia for your UFC debut is no easy task, so despite a game effort and a few bright moments, Russia’s Alexander Yakovlev was unable to pull off the upset, with Sao Paulo’s Maia taking a clear-cut unanimous decision win.

Yakovlev used every inch of Octagon real estate to stay away from Maia as the fight opened, but after doing a lot of chasing, Maia dropped his foe with a left hand, quickly moving into the mount position. Yakovlev tried to hold on in order to force a restart, but Maia stayed busy with his strikes putting a dominant round in the bank.

After a tough opening round, Yakovlev tried to break through offensively, but to no avail, as Maia got the takedown and the mount once more. Yakovlev was nothing if not resilient though, and he survived again, this time getting the top position on the Brazilian vet in the final stages of the frame.

Down two rounds, Yakovlev pushed the pace, taking Maia down briefly in the opening minute while also punishing his legs with kicks and landing hard punches upstairs. Maia was able to stop the bleeding with three minutes left, taking Yakovlev down and getting into the mount for a third time, and though he wasn’t able to finish, he left no doubt in the eyes of the fans or judges.

California featherweight Robbie Peralta went into Rony Jason’s Brazilian backyard and emerged with a hard-fought win, taking a three round split decision over the Ceara native.

Jason let Peralta dictate the pace for much of the first round, an odd strategy because when the 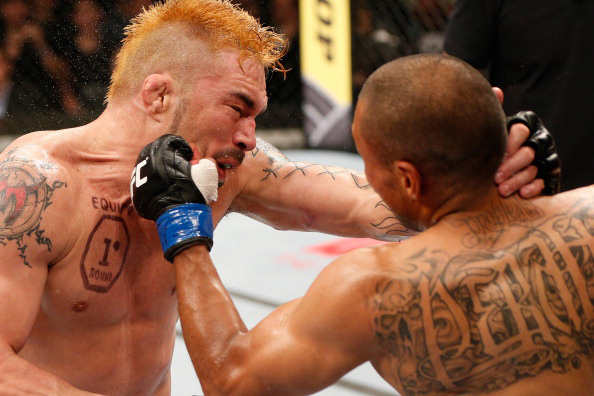 Brazilian did let his fists, feet, and elbows go, he was successful, jarring Peralta on a few occasions, even if the Californian was the busier of the two.

A wild flurry by Peralta got the second off to a good start for him, but as he clinched up with Jason, it was the Ultimate Fighter Brazil winner who went on to score the takedown. Peralta scrambled and reversed position, Jason responding with a triangle choke attempt that Peralta easily pulled free from, putting the bout back on the feet. While standing, a hard right jarred Jason, but only for a moment, and the round ended with both fighters slugging it out at close range.

Some solid back and forth action in round three was interrupted by an accidental eye poke by Jason, and then it was back to business, with each fighter trying to end the fight with each shot thrown. But with Peralta again being the busier fighter, Jason tried to steal the round with a takedown before the final horn, but it wasn’t enough to take the decision.