Stipe Miocic Is Locked-In On Adding To His Unparalleled Resume At UFC 260.
By Zac Pacleb, on Twitter @ZacPacleb • Mar. 25, 2021

The last eight months were good to Stipe Miocic. Notably, he won the rubber match against Daniel Cormier and finally closed a three-year chapter of his career with the notion that the Cleveland native stood as the greatest heavyweight to grace the Octagon. A few months later, his beloved Cleveland Browns earned back-to-back wins over their rival Pittsburgh Steelers. The latter came in the playoffs, the first postseason win for the Browns since 1995.

So, considering Miocic’s undying love for all things Cleveland, it begs the question. Which victory was more satisfying: his unanimous decision over Cormier or the Browns’ Wild Card playoff win?

“Oh, man. That is a tough question. I’m gonna have to go with the Browns,” Miocic told UFC.com. “It was crazy. It was nuts. They scored 28 points in like two seconds. I was taking off the wallpaper and was like, ‘What the heck is going on?’ My wife is like, ‘What’s going on?’ I was like, ‘Just leave me alone.’ It was crazy. I was watching it on my YoutubeTV app and listening in my headphones. Craziness … I’m just happy they won twice, right? It was crazy. I saw a fumble, and then they scored, and an interception and a score. I’m like, ‘What is going on right now?’ It was surreal. This isn’t for real, and it was. We did well, and then we almost beat the Chiefs. It was a close game, but we were right there. We got some good guys now, so rock on. Finally.”

While Miocic has probably been the largest source of Ohio-based athletic achievement since he made his promotional debut in 2011, the champ reps his hometown as hard as anybody does for theirs on the roster, right down to embracing the underdog role. Despite rather handily beating Francis Ngannou more than three years ago, Miocic sits as the betting underdog heading into their rematch at UFC 260.

Miocic isn’t all too concerned with that, naturally. When you earn the tags Baddest Man on the Planet and Greatest Heavyweight Ever, what oddsmakers have to say slides off as easily as Miocic slipped most of Ngannou’s vicious punches at UFC 220. Although he is once again supremely confident in himself, he’s not exactly sure why he’s not getting the kind of respect Miocic’s resume suggests.

“I don’t really care if people are giving me my due respect,” he said. “I’m going to do what I do. I’m the underdog as usual, and (there’s) nothing new out of that equation, but I’m not worried about that. I don’t worry about all the hoopla outside. I’m just going to go in there and do my thing and keep my belt. I think (it’s because of) my great voice, my flowing hair and my good looks just sometimes – it is what it is (laughs). No, honestly, I don’t know. I wish I had an answer. I don’t have an answer for that. I’m used to it by this point, and I don’t really care.

“I don’t worry about what other people are thinking. I’ve stopped doing that a long time ago.”

Saturday night is familiar territory for Miocic. It will not only be his second bout against Ngannou, but his fourth championship rematch overall, and in two fights against Cormier and a 2017 fight against Junior Dos Santos, Miocic is a perfect 3-0.

On the whole, Miocic is much more than a power puncher, although his 15 knockout wins might suggest that. Whether he is on the back foot or pressing forward, Miocic wields fight-changing power. But it’s the Clevelander’s ability to make adjustments on the fly and turn the tide of a fight that has made him a great champion over the last half-decade. The approach, even when facing someone for a second or third time, doesn’t really change either.

“If it’s a rematch or if it’s someone new, it doesn’t matter,” Miocic said. “It’s a fight. That’s what it is. It’s competition. I have a man that’s trying to take something that’s mine, and I’m not giving it up. I’m never going to stop being motivated.”

One shift he made before his last fight is splitting his training camps between his longtime home of Strong Style in Independence, Ohio, and his actual one. He and his coaches made that change due to the COVID-19 pandemic and all the precautions taken along with that, and while training at home was something Miocic wasn’t interested in before, it will be something he continues if and when the world opens up a little more.

The biggest benefit, of course, is having more time at home with his wife, Ryan, and their daughter Meelah.

“It actually helped out a lot,” he said. “I’m always home, but I’m home more now with my daughter, especially. At training sessions, she’s there playing with the mats after we’re done, going to the pool together. It’s just so much nicer. I don’t have to rush home. Sometimes I missed things because I was training. It’s nice to be closer to home and not worry about missing things.”

When rematches surface, the natural narrative is to look back on the first fight and observe any changes or similarities in the fighters and circumstances as the second bout draws closer. Both Ngannou and Miocic have acknowledged each other’s improvements and accomplishments since their first bout. Miocic went toe-to-toe in a potentially legacy-defining trilogy against Cormier, and meanwhile, Ngannou bounced back from his losses to Miocic and Derrick Lewis to earn four vicious first-round knockout wins in a row. 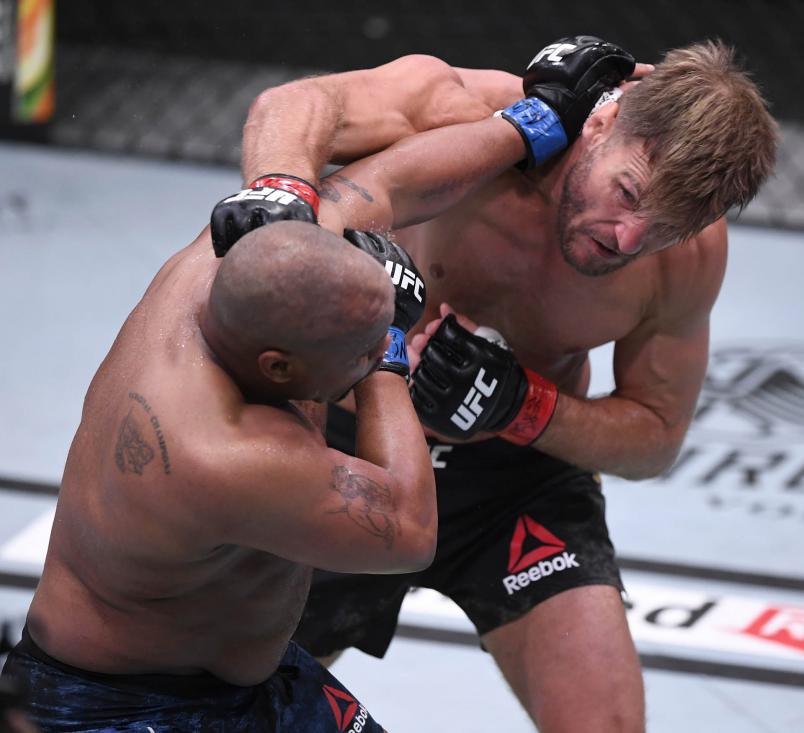 So, once again, Ngannou looks like a juggernaut of a title challenger. And once again, most figure Miocic’s best avenue to victory comes through the utilization of his grappling to ground Ngannou and sap the energy from the first fight. The questions that are buzzing ahead of the matchup mostly circulate around that exchange, but for Miocic, it’s not all too complicated.

A second win against Ngannou would add another eye-popping accolade to Miocic’s stacked resume, one that is unparalleled in the division’s history. Even though his legacy more or less locks him in as one of the best to ever do it, Miocic has repeatedly said he’s not looking to retire any time soon.

That begs the question of what would come next should he handle business on March 27 (which Miocic insists he will). A wave of younger heavyweights has climbed up the ranks recently as the division appears to be turning to a new chapter, and the heavyweight debut of Jon Jones continues to loom over the title picture. 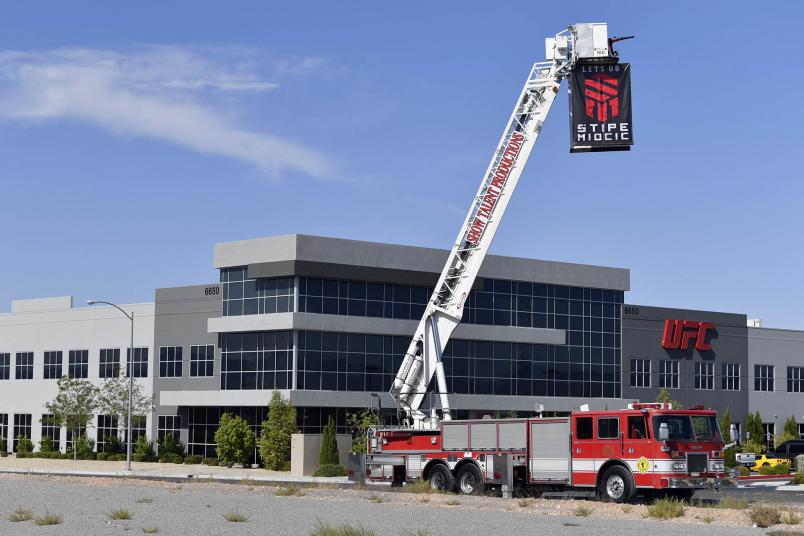 A fire truck displays a banner in support of Stipe Miocic outside the UFC Apex prior to his UFC heavyweight championship title defense against Daniel Cormier during the UFC 252 event on August 15, 2020 in Las Vegas, NV (Photo by Jeff Bottari/Zuffa LLC)

What is most pressing to Miocic - other than Ngannou, of course – is the fact that he and his wife are expecting a baby boy later this year. Coincidentally, the Miocic family was awaiting the birth of Meelah ahead of the first Ngannou fight. That’s all he’s concerned about in terms of “next.”

“At the end of 2021, I will be enjoying my new child,” Miocic said. “We have a baby boy on the way, so we’re keeping the name going. I’m happy no matter if it’s a girl or a boy, but I think my wife is more happy now because she’s going to have one on her side. My daughter, she’s all about daddy. She’s a daddy’s girl, so now she’s already nurturing him. The kid’s not even out. I’m like, ‘Come on.’ We’ll be doing that. Whatever happens. Whatever the UFC wants me to do.

“Right now it’s all about this Saturday, UFC 260 with Francis. That’s what I’m worried about, and after I get done taking care of business, then I’ll worry about after.”