Stipe Miocic's Resume Speaks For Itself

The heavyweight champion might already have a claim as the greatest ever, but Stipe Miocic knows he needs to handle business at UFC 252.
By Thomas Gerbasi, on Twitter @tgerbasi • Aug. 14, 2020

Nothing lasts forever, especially in the heavyweight division of the UFC, but perhaps, maybe for just a moment, Stipe Miocic thought he would hold the championship belt for as long as he wanted to.

And who could blame him if had such thoughts running through his head? He had already set the UFC record for most consecutive successful title defenses, was coming off a dominant win over the scariest man on the planet in Francis Ngannou, and he was about to face a man who had made his name over the last few years at 205 pounds.

But there was Miocic in July 2018, on a plane going from Las Vegas to Cleveland, without the belt after Cormier stopped him in a single round.

“The flight home was terrible,” Miocic said. “You’re not the champ anymore; I lost to a guy I should have beat. But the best thing out of the whole situation was two weeks later my daughter was born. And that was my saving grace. She saved me.”

When Miocic and his wife Ryan welcomed Meelah Claire into the world, the fight game didn’t matter anymore. There was no talk of what went wrong in the Cormier fight, getting a rematch, going to the gym or anything of that sort. Miocic was going to be a dad, and he embraced every second of it.

The new dad is a prizefighter, though, one of the best heavyweights to ever strap on the gloves. So with that unofficial title comes obligations, like getting a tangible title back. Miocic didn’t want to wait in line for another shot. He wanted one ASAP. It wasn’t the desire of someone looking for a quick payday. It was the desire of someone looking to right a wrong.

“He won the lottery,” said Miocic of his first meeting with Cormier. “S**t happens. I’ve been hit way, way harder, but I just got caught on the button. No excuses, I lost.” 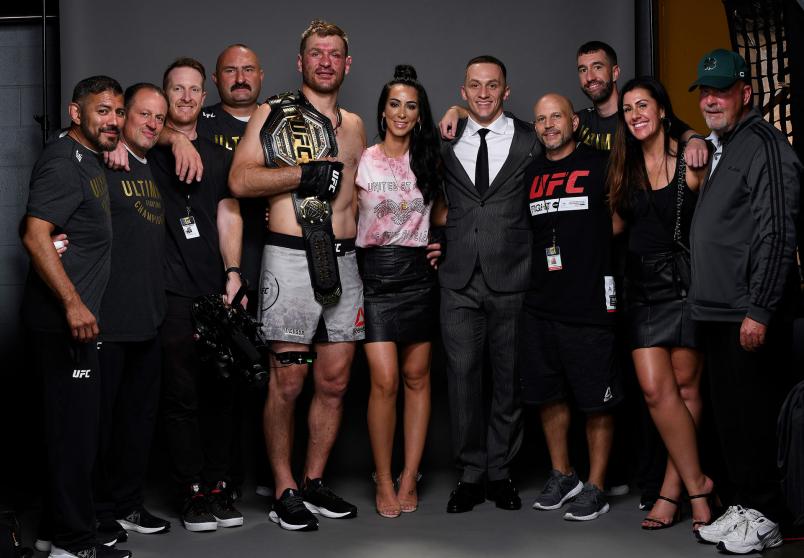 Determined that a return bout would end in a much different manner, Miocic would have to wait a little bit, but in August of last year, he got his shot at redemption. And he hit his mark, scoring a come from behind fourth-round stoppage of Cormier.

“It took a while, but I’m here,” he said. “I got what I wanted back. It didn’t start out well in that fight, but I figured it out. I got back into my groove.”

And as Miocic broke out of his funk, Cormier tired. A ferocious body attack followed and soon the title was heading back to Cleveland. Miocic had his belt back.

Given the results of the first two bouts, it was inevitable that a third meeting would happen, and it will happen in the main event of UFC 252 on Saturday night in Las Vegas. But while the buzz about the trilogy bout is about the general consensus that the winner will leave the Octagon as the greatest heavyweight in MMA history, the 37-year-old Miocic believes that question has already been answered.

“I think my resume speaks for itself,” he said. “But I’m gonna keep winning, then it would be hard to deny it.”

It may already be tough to deny Miocic what he’s earned over the course of decade-plus in the sport. He’s 13-3 in the UFC, avenging two of his three losses. He owns wins over UFC champions Cormier, Junior Dos Santos, Fabricio Werdum and Andrei Arlovski, while defeating top contenders of his era such as Ngannou, Mark Hunt, Alistair Overeem and Roy Nelson. Win or lose this weekend, and he could walk away with a secured legacy, but leaving isn’t on his mind at the moment.

Winning will do that for a fighter. Even being forced to create a gym in his house for supplemental training due to the COVID-19 pandemic has given Miocic a new jolt of enthusiasm for the sport. As for the third fight with Cormier, who is expected to retire after the bout’s conclusion, Miocic has a simple prediction.

It’s not said with any venom, and there’s no bad blood between the heavyweight greats even though they won’t be going on any family vacations together. That’s the way Miocic likes it. He can shake hands with his opponents before and after the fight, but when they’re locked in the Octagon, it’s each man for himself. In fact, when Miocic does walk away from the sport, that workmanlike approach is what he hopes people will recall when they think about him.

“I just want to be remembered as a guy that went out there and fought, didn’t talk s**t and did his job,” he said.