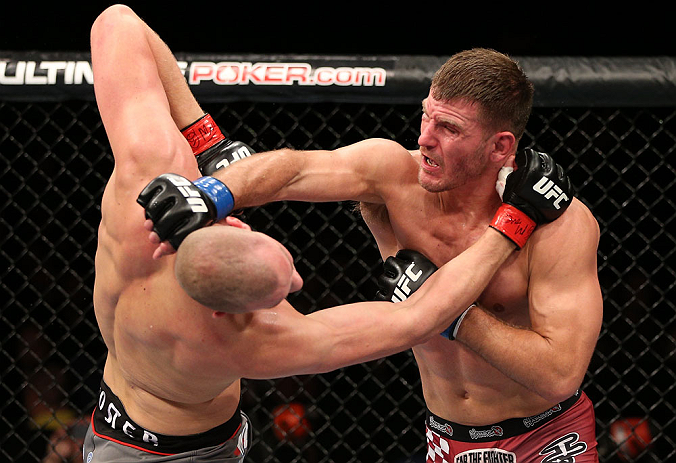 In team sports, where lengthy regular season schedules serve as the prelude to the arduous grind known as the playoffs, suffering a loss or two or 30 along the way isn’t uncommon.

Over an 80-game schedule, a .625 winning percentage is good for a top four seed in the second season, and home field advantage for at least one round of the playoffs. Getting invited to the dance is the first order of business, and from there, as long as you always win one more than the other guys, you can still emerge as the champions when everything is said and done.

In fighting, every loss matters.

Wins move you forward, leading to bigger paydays and higher profile opponents. More often than not, the only way to make it to the top is to win and win again, stacking up victory after victory until championship gold has been strapped around your waist.

You don’t get the opportunity to bounce back from last night’s unexpected defeat two days later. Instead, the pages on the calendar keep turning, and you’re given three, four, five months to think about what went wrong, yearning to get back into the cage and have your resume once again open with a win.

Over the first nine fights of his career, Stipe Miocic was near perfect.

He racked up nine straight wins, eight by way of stoppage, the final three of those victories coming on the biggest stage in the sport. Two years and three months into his career as a professional cage fighter, the Euclid, Ohio native was one of the top heavyweight prospects in the UFC; a fighter on the fast track towards the top of the division.

After battling through a 15 minute grind with Joey Beltran in his promotional debut, Miocic made quick work of Phil De Fries in a battle of unbeaten competitors on the inaugural UFC on FUEL TV event in February 2012. Three months later, he joined the all-heavyweight main card cast at UFC 146, and for the second straight fight, he handed his opponent the first loss of their career as he dispatched Shane del Rosario with a series of elbows from mount.

The win positioned Miocic opposite another surging young talent, Stefan Struve, in the main event of September’s UFC on FUEL TV event in Nottingham, England. A seasoned UFC veteran despite being just 24 years old, the talented Dutch heavyweight was on a roll, having won four straight contests, and nine of 12 overall in the Octagon.

A barrage of heavy shots from the long and powerful Struve shattered his unblemished record.

The progress he’d made in his previous three appearances in the Octagon was suddenly lost, and despite an impressive 9-1 record, a loss topped his list of appearances, and pressed pause on his climb up the heavyweight ladder.

“It has motivated me a lot more as a fighter, and pushed me to grow a lot more,” said Miocic of the setback he suffered against Struve last September in England. “I think you always grow, no matter what. Coming off that loss, I’ve grown a lot I think, and been working every day at what I need to get better.”

Nine months after suffering the first setback of his career, Miocic is poised to return, eager to get back into the win column, and resume his climb towards the top of the heavyweight mountain.

Most times in this type of situation, you wouldn’t find yourself squaring off against an established star on a three-fight winning streak, but that is exactly the opportunity Miocic will get this weekend when he shares the cage with Roy Nelson in the co-main event of UFC 161.

Initially, the 30-year-old Miocic was slated to welcome veteran Soa Palelei back to the Octagon, but with a rash of injuries prompting a number of changes at the top of the marquee, the UFC called on “Big Country” to help bolster their debut event in Winnipeg, giving the once-beaten Strong Style Fight Team member a chance to quickly re-establish himself as a factor in the currently wide open heavyweight ranks.

“It was a nice break,” Miocic said of the layoff between his bout with Struve and Saturday’s encounter with Nelson, adding that it was just a matter of timing. “I don’t mind fighting every three or four months – I was doing that – but it’s nice to relax a little bit, work on my game more.”

While it would certainly be easy to get thrown off by a short notice shift from a veteran who has been racking up wins against relative unknowns (and Sean McCorkle) in Australia to a cult figure who has consistently been fighting the best in the business, the Cleveland State alum has done a good job of keeping everything in perspective.

Despite being an accomplished grappler and Brazilian jiu-jitsu black belt under Renzo Gracie, Nelson has spent his time in the UFC slinging heat and building a reputation for having one of the best chins in the business, albeit one that’s obscured by his grizzly salt-and-pepper beard.

Over his last three fights, the former Ultimate Fighter winner has needed just under six minutes to leave Dave Herman, Matt Mitrione, and Cheick Kongo staring up at the lights, wondering what just happened.

Saturday night, Miocic gets the chance to halt Nelson’s current climb up the rankings, and though he’s certainly aware of the thunderous overhand right that “Big Country” likes to throw early and often, the well-rounded heavyweight prospect is ready to battle wherever the fight takes place.

Most importantly, he’s ready to put another win on his resume.

“I just expect the unexpected; that’s what MMA is,” he said with a laugh. “You go in there to keep it on the feet, and next thing you know, you’re on the ground. How many fights have you seen that it has gone like that – two guys who are very good on their feet go to the ground?