Stipe Miocic is in the fight game to win title 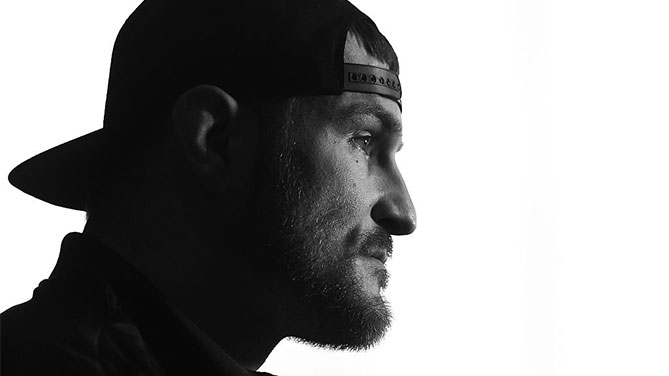 It isn't if he wins the UFC heavyweight championship belt, but when he wins the coveted strap.

Miocic, who was an NCAA Division I athlete in two sports - baseball and wrestling - at Cleveland State University, talks with passion about wanting to bring the UFC title to his home city.

And when questioning what accomplishing that tough task would mean to Cleveland if he could do it, Miocic did not hesitate to point out that it’s when he wins this title and brings it back to Cleveland.

“When I was starting with the UFC, I said I was here for one thing and that was the heavyweight title,” said Miocic, who challenges heavyweight champion Fabricio Werdum for the heavyweight title at UFC 198 on Saturday night. “I didn’t know how long it was going to take. Every fight has made me a better fighter. I’ve had a few bumps in the road that I think have made me stronger. I’m just happy where I’m at. I’m getting better every day and I’ve got still a lot of time left in my career.

"I’ve been training at Strong Style in Cleveland. I’ve been there my whole life. I’ve got the best coaches and people in the world. It’s family. And the city. We’re going to start earning respect by winning this title over there.”

Originally, the 33-year-old with an impressive 14-2 pro record almost took this title fight on short notice back in February when former champ Cain Velasquez was forced to withdraw from his bout against Werdum. It seemed that some Octagon enthusiasts were more excited to see Miocic face Werdum for the belt than Velasquez. But circumstances quickly changed again, as Werdum pulled out from the proposed replacement bout against Miocic.

Cut to three months later and Miocic is set to tangle with Werdum for the UFC heavyweight belt in Arena da Baixada soccer stadium in the Octagon’s first visit to Curitiba, Brazil.

“The UFC called me; Cain had unfortunately got hurt and they called me to step in to fight,” Miocic said. “I guess Werdum was hurt too and the fight was called off. A couple weeks later, I got the call that I was going to get another fight with Werdum and it was with a full camp, so even better. I said I’ll take it.

"I’m just happy I’m getting that shot. I want to bring that belt back to Cleveland. That’s what I care about. I want to put on an amazing show for the fans on May 14. I’ll make it a fight.”

Don't wait! Pre-order UFC 198 right now so you are part of this historic event Saturday night

Coming into this title tilt, Miocic will be riding the momentum of his eighth UFC win, including back-to-back knockouts in his past two performances. In May of 2015, Miocic became only the third heavyweight in UFC history to score a fifth-round finish with his TKO of the granite-chinned Mark Hunt. 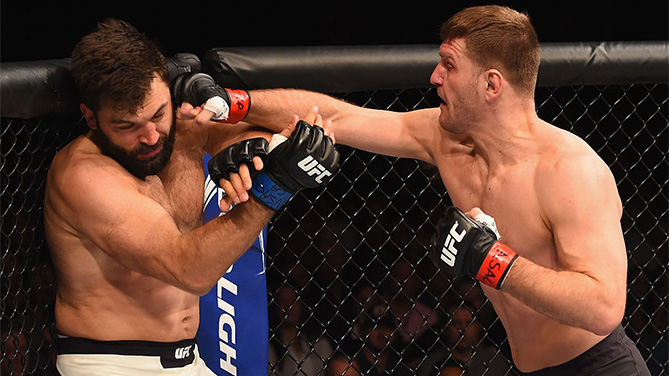 Andrei Arlovski in their heavyweight bout during the UFC 195 event inside MGM Grand Garden Arena on January 2, 2016 in Las Vegas, Nevada. (Photo by Josh Hedges/Zuffa LLC)" align="center" />Most recently, Miocic dusted former UFC champ Andrei Arlovski in just 54 seconds at UFC 195, earning a Performance of the Night bonus. The striking stoppage was Miocic’s third inside the Octagon in under a minute.

“It was just another day at my job,” Miocic said. “I train so hard. Andrei’s a super tough guy. He was on a six-fight win streak. He’s the former champ. Everyone in the heavyweight division is scary with four-ounce gloves on. I was expecting a real tough fight. I caught him with a good punch and I ended the night early. I think you always try to end the night early. I knew he was going to come out swinging just like I was. And I beat him to the punch.

"Having to go the full 25 minutes, it’s a grind, but what am I going to do? I train for whatever it is. If it’s 25 minutes or 15 minutes, I’m ready to go the whole time no matter what. Of course, it’s better to end it early. But all I care about at the end of the day is getting in there and getting my hand raised and getting that W. That’s All I care about.”

Miocic vs. Werdum is simply a wonderful matchup between two fighters who have appeared to be at their best recently, and they will be competing for the greatest prize in the sport - the UFC heavyweight championship.

The current champ has been incredible and unbeatable in his second stint in the UFC by winning all six of his bouts, with four finishes. This will be Werdum’s first title defense after the BJJ black belt essentially won the championship twice in Mexico City by scoring a flying knee knockout against Hunt for the interim belt at UFC 180 and then securing a guillotine choke on Velasquez for the undisputed belt at UFC 188. Admittedly, it will not be easy, but Miocic is focused and ready for what he knows the outcome will be as he competes in his first world title fight.

“He’s super tough,” Miocic said of his opponent. “He’s the champ for a reason. To be the best in the world, you have to beat the best in the world. He hasn’t beaten somebody like me. I know he’s going to come out swinging and so am I. I’m going to surprise him. The fans should expect me to come out there and put on a show. Expect me to do everything I can to win, never stopping and making it exciting. I expect a lot of fireworks and I expect to see a new champion.”