"Stefan’s a step up in competition. He’s a super tough guy who is great at every aspect of the game and he loves fighting." - Stipe Miocic 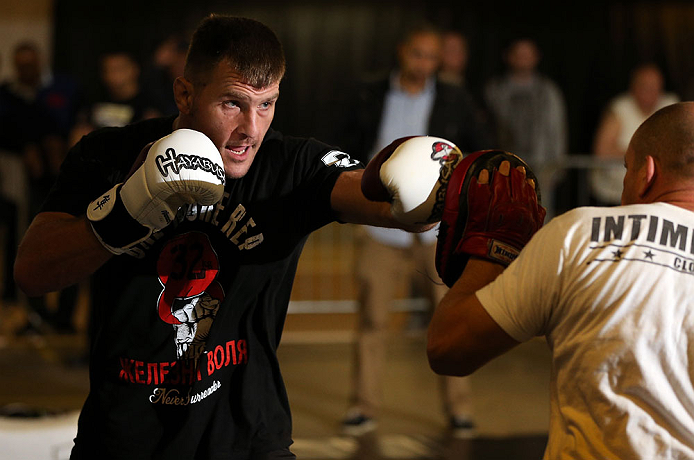 Stipe Miocic (9-0) is a man of few words. At six feet, four inches tall and 245 pounds, he never really needed to say much to get his point across. It’s understandable then, with a uniquely Croatian name and an icy Eastern European stare, that people often think he doesn’t speak English.

Even his fellow UFC fighters.

“I walked up to him in Houston after he fought Joey Beltran to get him to sign an autograph for a little kid,” says recently turned light heavyweight Chael Sonnen. “And there I am talking real slow, like ‘c o n g r a t u l a t i o n s, S t i p e,’ meanwhile I’m pronouncing it STIPE, not Stee-pay,” he says, laughing at the memory.

“I was going to call him out on that the next time I saw him,” he says, laughing hysterically. “Yeah, he was talking really slow and I was getting checked out by the doctor after my fight and I just nodded and signed the autograph. Chael was one of the first UFC guys I ever met and it was really cool. He’s a great guy.”

As part of the main event attraction on UFC on FUEL TV 5 against heavyweight contender Stefan Struve (28-5) this weekend in Nottingham, England though, it’s safe to say people will know how to pronounce his name and that English is in fact, his first language.

The Cleveland born Croatian-American and two sport collegiate athlete (wrestling and baseball) and part-time firefighter is excited about headlining a UFC event on national television.

“I’m a little nervous, but if I just focus on my gameplan and on my coach’s voice in the corner I won’t get too anxious,” he says. “One thing about being a professional firefighter is learning patience. Sometimes you get calls, and sometimes you don’t. You just have to be comfortable with that or you’ll drive yourself crazy.”

Miocic has been on a tear in his MMA career, but he is in no way an overnight success. After college he took to the amateur circuit and won his first five fights, but then took a year and a half off to focus on boxing, where he won the Golden Gloves in Cleveland.

“I’m really happy for him,” says Team StrongStyle teammate Brian “The Predator” Rogers. “To see the past seven or eight years of hard work paying off is so great. Stipe is one of the nicest guys I know. To call him the Green Giant isn’t a stretch at all. He is always helping guys out in the gym,” he said.

Rogers thinks his friend is going to surprise Struve with not only his footwork and his hand combinations, but also on the ground.

“Stipe is very good at submissions,” he says. “He is unorthodox. Our trainer comes from more a catch wrestling background as opposed to straight jiu-jitsu, so I think Struve is going to be a bit confused on the ground.”

Stipe knows, however, that with Struve, he’s in for a tough night.

“Stefan’s a step up in competition,” he said. “He’s a super tough guy who is great at every aspect of the game and he loves fighting. He’s a guy who’s willing to throw down. I just can’t wait to go out to Nottingham and do this; it’s going to be a great card. I’m ecstatic for the opportunity.”

Miocic’s success in the Octagon has been impressive. He went the distance with the notoriously tough-as-nails Beltran in his UFC debut, taking a unanimous decision in the first fight of that night. There weren’t many people yet inside The Toyota Center in Houston, TX, but as I sat in press row, I noticed there were three very vocal fans supporting him in the stands – his cousins and his girlfriend.

“They come to all my fights,” he said. “They are the most supportive and can get loud. My mother is going to come to England but I know she won’t be able to watch. My father is coming from Croatia so I’m excited about him seeing me fight.”

At nearly seven feet tall, Struve poses unique challenges and is a hard person to emulate in camp, so Stipe visited a former UFC champion for some “height” training.

“I went out to train with Tim Sylvia,” he said. “Tim’s really big so it was good to get some time in with him. Struve is a very good kickboxer and his ground game is outstanding. He is really long and I’m small for heavyweight as it is, but being a heavyweight is fantastic. I love food so it’s great to not have to cut weight. I do eat clean now because about a year ago my coach had an intervention with me. I was enjoying it too much. I do think I need to put on weight, but I need to do it slowly. Sometimes if you gain weight too quickly it will backfire on your speed and conditioning. But I do think if I am going to continue to win at the highest level of the weight class, I’ll need a little more power.”

After taking Beltran to a decision, Miocic next faced Phil De Fries and knocked him out in just 43 seconds of the first round, and then impressively TKOd Shane Del Rosario at UFC 146.

“I’ve learned that I can’t wait too long before letting my hands go,” he said. “I have to get going a lot quicker than I did in my previous fights. These guys at heavyweight are usually twenty five pounds heavier than me and they can end the fight with one good punch, so I can’t wait too long out there.”

Stipe works part time as a firefighter and EMT at two different Cleveland stations, and he says the guys he works with aren’t impressed with his UFC career.

“They bust my balls pretty good,” he says. “They keep me grounded.”

Rogers says Stipe also gets it at the gym. “If he does anything stupid on TV we will destroy him,” says Rogers. “He’s so nice he laughs along. But being the biggest and fastest fighter in the gym, we don’t want him too mad at us.”

Miocic doesn’t need to get mad in order to fight well. In fact, to hear him tell it, it’s not really a big deal at all.

“I just have to out there and get the W. I don’t care if it’s a knockout, a submission or a decision. I need the W against Struve. I’m just going to go out there and do what I do.”