"You have to get in there and put in the work and go with the good guys
and that’s how you’re gonna learn. You gotta get beat up a
little bit if you want to get better." - Josh Neer 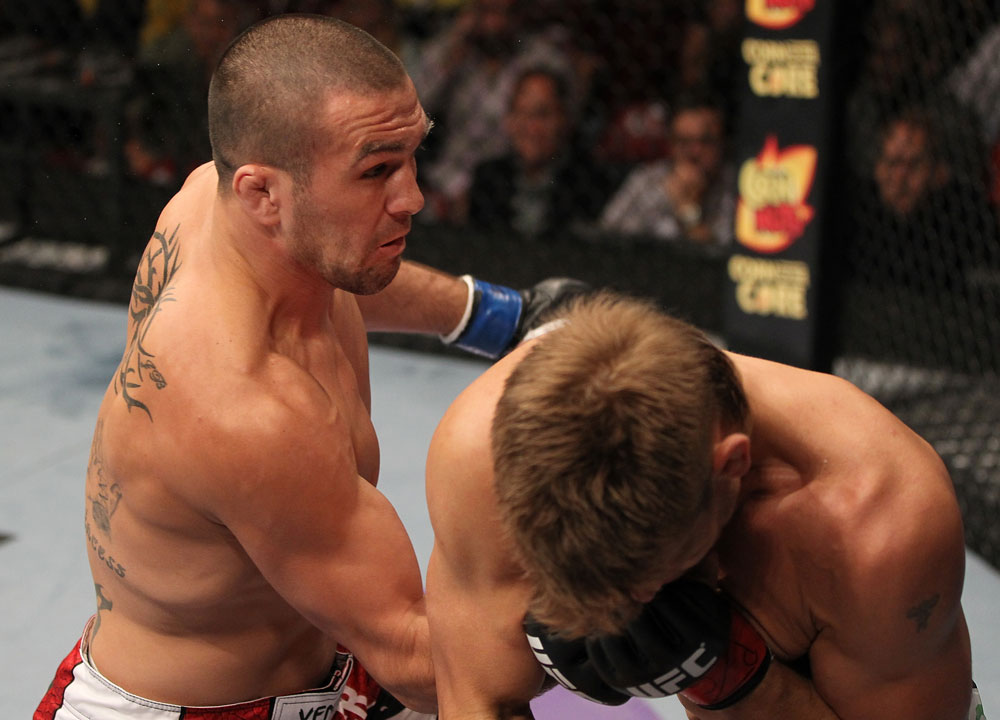 “Keep your hands up.”

The words didn’t come from a coach, a training partner, or a fan. Following Josh Neer’s knockout loss to Mike Pyle in June, an upset that snapped a six fight winning streak, it was his five-year-old daughter reminding her dad of fighting’s cardinal rule.

“She told me in my next fight I have to keep my hands up,” said the welterweight veteran, “Every day I see her, ‘dad, you have to keep your hands up.’ She’ll even yell at me in practice. She’s my coach too.”

So will she be working his corner for Friday’s fight against Justin Edwards?

It’s a light-hearted moment for “The Dentist” after a loss that was far from being something he could laugh off. Heading into the closing stages of a competitive first round between the two seasoned competitors, Neer tagged Pyle a few times and went on the attack looking for a finish.

Then Pyle landed a flush right hand and Neer fell face first to the canvas, with the referee stepping in to halt the bout with four seconds left in the round.

“He caught me with that punch and I guess I have to realize that once I have someone hurt I can’t just rush in with my hands down and just throw whatever. I have to be more cautious.”

It was only the second time in 45 pro fights that Neer had been knocked out.

After nearly a decade as a professional, Neer knows better than most that the more you dwell on a defeat the more it can haunt you and keep you from moving forward. So he tossed the Pyle fight aside, re-signed with the UFC, and got ready for the next call. And even though he didn’t know much of anything about The Ultimate Fighter 13’s Edwards when his manager informed him of the fight, it didn’t matter.

“I didn’t really break him down and I don’t know anything about him,” said Neer. “I didn’t even know who he was when my manager called me and talked to me about fighting him. So I had to go look him up and I saw a couple of his youtube videos, but I don’t really know much about him. I’m focusing on myself and just trying to get better.”

It’s an overused term when talking about Neer (and no one overuses it more than me), but the Iowan is the epitome of “old school” in the still relatively young sport of mixed martial arts. The fact that he’s only 29 years old makes it even more remarkable that he’s such an old soul of the game, but considering that he came up in the legendary Miletich Fighting Systems camp that at one time housed the likes of Matt Hughes, Jens Pulver, Jeremy Horn, Robbie Lawler, Tim Sylvia, Drew McFedries, Tony Fryklund, Rory Markham, Spencer Fisher, and a gang of hardcore fighters, it’s not too surprising that he views the sport a lot differently than some of his peers.

“You have to get in there and put in the work and go with the good guys and that’s how you’re gonna learn,” said Neer. “You gotta get beat up a little bit if you want to get better. If you’re always the guy that’s the hammer and you’re beating up the nails, I just don’t think that you can get the experience. You’ve got to get in there and go with the guys that have been around for a long time.”

You may take your lumps along the way with this method, but in the process you learn what it takes to compete at the highest level and build up a toughness that’s hard to break.

“That’s how I came up at Miletich,” said Neer. “And I think that’s how the guys at Chute Boxe came up. They went in and they fought in the gym, and I think that’s where I get the mentality. I see all different types of guys in the gym and I have to adapt my style to them and I’m just gonna go in there and try to impose my will on him (Edwards).”

Over the years, that way of thinking and acting has made Neer a popular figure among his fellow fighters. He has trained with and is friends with the Diaz brothers, Jeremy Stephens was one of his main sparring partners back in their Iowa days, and though he may not have an action figure in his likeness, his reputation is rock solid. Even Edwards said of his opponent, “He is a real fighter who actually comes out and tries to finish opponents. He doesn't just try to squeak by on a decision. I've enjoyed watching him in the past for this reason.”

When told of this, Neer sounds almost embarrassed.

“It’s kinda weird, but I’ve been around for a long time,” he said. “Before, I used to be the younger kid and I was watching Matt Hughes and Jens Pulver and guys like that. And now the younger guys have been watching me.”

He appreciates the respect though.

That mission is already accomplished. Now it’s time to get back in the win column, and he has every intention of doing just that, especially with the words of his youngest coach ringing in his ears.