Still Learning, Cung Le Has More Tricks up His Sleeve 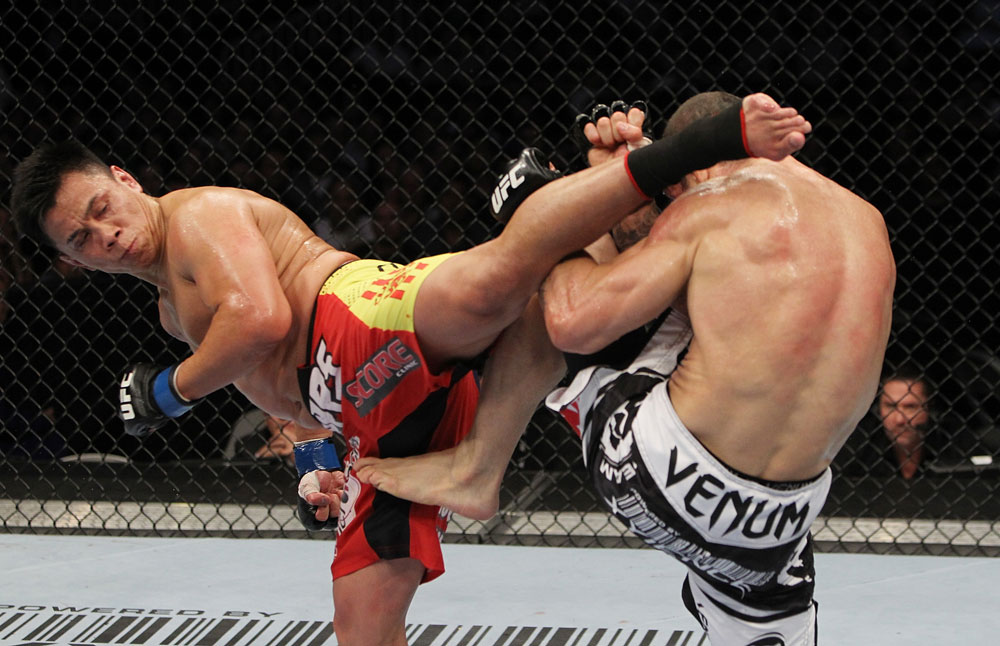 After looking at any of Cung Le’s films, all packed with intense fight scenes, brutal finishes, and acrobatic jaw dropping moves, the first thing that may come to your mind is, yeah, it’s a movie, but it’s got to be a pretty exhausting process regardless. Le won’t deny that, but he also won’t say it’s more exhausting than getting ready for a fight.

“Training for a fight is definitely more draining,” said the UFC middleweight, who makes his second Octagon appearance this Saturday night against Patrick Cote. “It also depends on what role you’ve got – if you’ve got the lead and you’re carrying the movie, like in Dragon Eyes, where I choreographed all the fights and I starred in the movie, that was very draining, but it was nothing like getting punched or kicked at. And you work in spurts. You shoot a scene and then you get ready for the director to set up the next scene, or you’re choreographing a fight and making sure that everyone’s on the same page so that no one gets hurt. So it’s nothing compared to training for a fight and taking your body to that point where you’re ready to break.”

Yet despite his successes in his other job (he’ll be heading off to Comic-Con after the Cote fight to begin promoting what is expected to be a Fall hit, “The Man with the Iron Fists”), the 40-year old native of Saigon isn’t about to leave the world of combat sports where he first made his name all those years ago. Yeah, it’s more draining and more taxing, both physically and mentally, but Le will always be a fighter.

“I started out as a martial artist, and I love to compete,” he said, noting that while working in movies has gone from a hobby to something that he can enjoy and get paid for, he is content doing both while he can. “Kind of like the Bo Jackson of entertainment and MMA,” he laughs.

Yet as the films and roles get bigger for Le, there is a bit of a juggling act to be done to make sure he’s getting in the proper work that will have him ready to compete against the best fighters in the world. That never was an issue, then it became one, but as he prepares for Cote at UFC 148, he seems to have found his working rhythm.

“A lot of people don’t realize that training and getting in shape for a fight is tough,” explains Le. “You’ve always gotta deal with injuries, and in my case, I’ve got a dual career, doing movies. Before, it was a lot easier to shoot a movie because I wouldn’t have a big role. I could be gone for two weeks or at the most three weeks and come back and have all this time to train. And now instead of two or three weeks, I’m gone for two or three months because the roles are getting bigger, and it’s tougher. But now I’m starting to get it down where if I’m away for that long, I have to maintain a certain amount of cardio and strength training so when I get back, I have the right amount of time to prepare and really put myself through the proper training so I can be at my best when I compete. I feel like at my best, I can compete at a higher level and execute all the things that I usually do in all my fights. It’s just how to manage it, how to maintain it, and stepping into the cage and executing it.”

After a storied kickboxing career and a run in MMA that garnered him a Strikeforce middleweight title and wins over Frank Shamrock, Tony Fryklund, and Scott Smith, Le got the call to the UFC late last year for a bout against Wanderlei Silva. It was expected to be a war, and it was, though Le didn’t really expect what he got from “The Axe Murderer” at UFC 139.

“We figured that Wanderlei was gonna come in and just attack,” said Le. “In every single tape we had seen, he just comes forward and we didn’t expect for him to change his gameplan, so he completely changed his gameplan to fight me and the next thing I know, he’s backpedaling and circling away and he’s not coming forward. It completely threw me off, and hats off to that gameplan. I expected him to come forward and I ended up chasing.”

It worked well enough for a while, as Le threw a varied array of his dynamic kicks and combinations at Silva, and he looked to be on his way to an emphatic win in his UFC debut. But grabbing victory from the jaws of defeat, Silva roared back late in the second round and caught and stopped Le. It was only his second loss as a mixed martial artist (the first was to Smith – and later avenged), and it didn’t sit well with him.

“For me, it’s really hard to lose,” said Le. “It hurt just as much as when I lost the first time against Scott Smith, but it happens, and you can’t change it, so you’ve just gotta take from it. What I took from it was that I definitely know what I’m made of, because even though when I felt my nose get broken, I thought I’ve got a good nose doctor and I can continue. If the round would have ended and if they would have let it continue, I would have gone back to my corner and said I’m gonna finish it. I definitely would not want to stop, and I would go out on my shield or have one of the greatest comebacks. It’s not the first time I broke my nose. My second MMA fight was the first time I broke my nose, and actually the bone popped out, but I finished the fight and ended up knocking the guy out. So it is what it is, I learned from it, and it’s definitely character building.”

If you’re one of the few cynics out there who think that Le has gone Hollywood, the above statements should clear up that misconception immediately. But what about the lifelong martial artist’s family? You’ve got to assume that they wouldn’t mind if he decided to make acting his full-time job, and does knowing that he is willing to walk through fire to compete and win make the idea of him continuing to fight even harder?

“My wife Suzanne, she supports me one hundred percent,” said Le. “I’m sure no one’s wife wants to see them get beat up or come home with a limp or a broken nose – or in my case, three of them (Laughs), but I’ve got complete support. My mom, I think she’s gonna skip out on this one; she says that she’s a little too old for this and her heart might not be able to handle it, so I understand. I think it’s my first fight that she’s not gonna be at, but I’m just gonna get going there, fight my heart out, and do my best.”

We expect nothing less from Le, one of the game’s most exciting fighters and best ambassadors. Yet what may be the scariest part about seeing the Sanshou master still competing at 40 is that he says he’s not done getting better.

“I’m always a student of martial arts and MMA,” he said. “You can never stop learning, and once you think you’ve learned everything, that’s when it kinda goes downhill. I basically feel like you always can learn, and if you keep an open mind, you can always improve.”