Checking in with the new king of the flyweight division, Demetrious "Mighty Mouse" Johnson 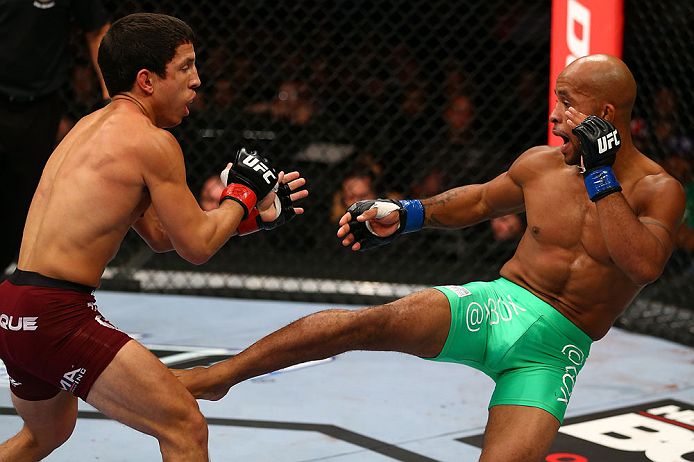 When it comes to eventful years, newly crowned UFC flyweight champion Demetrious Johnson is likely to have a tough time capping 2012. But even after moving from bantamweight to flyweight, winning the UFC’s first 125-pound title, and getting married, “Mighty Mouse” is positive that 2013 may have even more in store for him.

“There’s still a lot that I can accomplish in the flyweight division, and life is all about living it and having fun, and I plan on doing it in 2013,” he said. “Hopefully we’ll be able to get another house and have a kid and all that good stuff.”

So are we breaking any news about Demetrious and his bride Destiny welcoming a mini Mighty Mouse to the family? Well, not just yet.

“We’ll see what happens,” he laughs.

If it seems like we’re rushing Johnson, maybe it’s just a byproduct of talking to the fastest man in the UFC universe, a 26-year-old dervish who fights as if he’s double-parked. The latest case in point, his title-winning effort against Joseph Benavidez at UFC 152 last month, a fight that showed off just how exciting and fast-paced a flyweight fight could be, and when you add in the high-level technical displays by both combatants, it was a purist’s dream bout.

“Joseph is a tough competitor, and there’s a lot of stuff that I can work on, but overall I thought it was a great fight and a great performance by me and my camp,” said Johnson, who has watched his five round split decision win over Benavidez plenty of times since September 22, but depending on the company around, he sees the bout in different ways.

“There are some days I just sit back and enjoy it for what it was, like when I’m watching it with my family and friends, but when I’m by myself or with my wife or (coach) Matt (Hume), I sit there and I analyze every single second.”

With Johnson from the start, Hume, or as he is rightfully referred to as “The Wizard,” has been singing his charge’s praises for years, even before the future champion made his initial splash under the Zuffa umbrella in the WEC. His tactical work in the gym and the Octagon is among the best in the game, and Johnson couldn’t be happier to be one of his most accomplished students.

“Matt still goes and learns new stuff,” said Johnson. “He’s a student of the game and he brings that to us and that’s an honor. It’s good to have a coach that goes around and travels to learn new things, and also a coach that’s focused on five guys, instead of having 20 guys that are at the highest level.”

That one-on-one attention has done wonders for Johnson, who went 2-1 in the WEC at bantamweight before continuing that success in the UFC. In 2011, he defeated Kid Yamamoto and Miguel Angel Torres in back-to-back bouts before losing a competitive five round decision to 135-pound king Dominick Cruz in October of last year. In the 12 months since, Johnson has dropped 10 pounds, had a draw and a win in two bouts with Ian McCall, and then made history by beating Benavidez. Not bad for the kid who just missed out on two State wrestling titles in high school.

“I was very upset when I didn’t get first in my high school sports, but this is ten times better than first in State in my book,” he laughs. And while Johnson is currently relaxing at home, spending time with his wife, and resting up after a whirlwind year, don’t think that he’s resting on his laurels. He’s already looking at his dance card for 2013 (which is expected to have John Dodson up next), and his mindset hasn’t changed despite the shiny new hardware in his possession.

“I’m the hunter and I’m chasing after those guys,” he said. “I was looking at a UFC roster and I saw that there were 14 guys there (at flyweight). I got two down, I’ve got 11 to go.

“I’m not satisfied,” Johnson continues. “I always want to be better and improve. We made history on September 22, 2012, and that one’s in the books. Now it’s time to build a legacy, keep hunting these guys down, and keep putting on great performances against the top athletes in the world. And I might never be satisfied, but we’ll find out.”