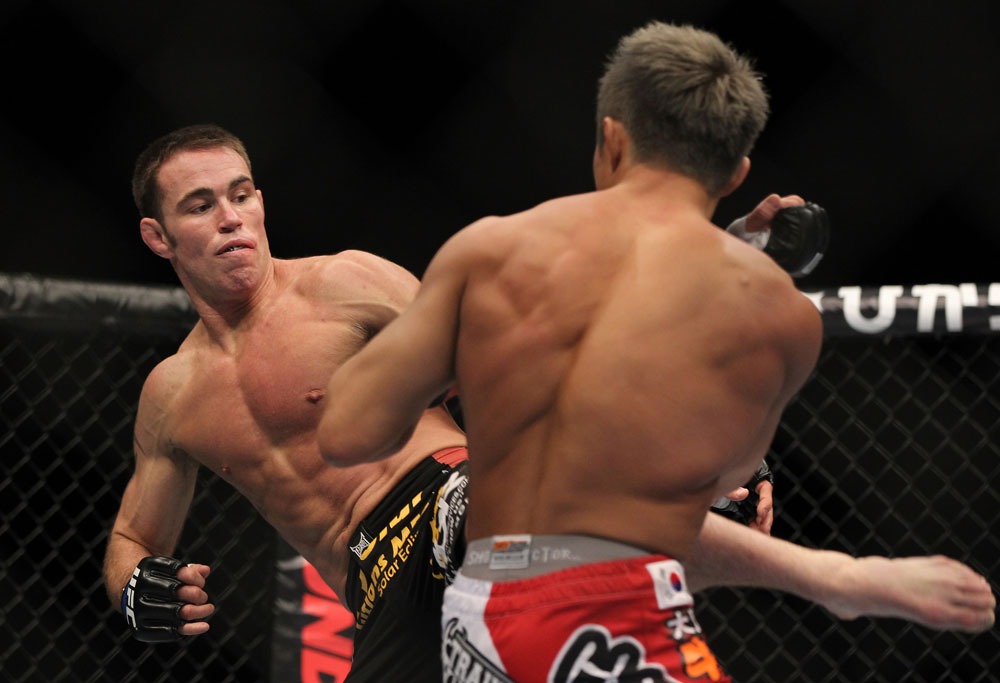 Do you want to know how long Jake Shields has been a cagefighter?

Shields started training mixed martial arts with UFC Hall of Famer Chuck Liddell in 1999. We’re not talking about “The Iceman” who had his famous trilogy for UFC light heavyweight gold with Randy Couture or the two wars with bitter rival Tito Ortiz. At the SLO (San Luis Obispo) Kickboxing Academy in 1999, Shields began his journey into MMA learning from the Liddell who was only 1-1 inside the Octagon.

Simply put, Shields has been in this MMA racket for quite a while, and he’s only showing signs that he’s nowhere near done with it.

“I've been thinking about it on and off,” tells Shields of making the move up to middleweight. “It wasn't something I immediately thought about after the fight, but it has been something I have been thinking about on and off. Deciding to gain weight and lose weight is a tough choice. I didn't feel as strong as I know I could be, so that's why I decided to make the change to go back up to 185. I decided that I felt good competing at 185 in the past, so I decided to give it another try. As far as training goes, I'm feeling amazing. I feel the best I've ever felt in this training camp. You never know how things are going to go in training and then into the fight, but, as of right now, I feel better than I've ever felt. I feel better than when I beat Dan Henderson. I can't wait to go out there fight night and show to the world what I can do at 185.”

Specifically at 185 pounds, Shields can beat Robbie Lawler, Jason “Mayhem” Miller, Dan Henderson, and be the Strikeforce middleweight champion. That says it all. From June 2009 to April 2010, the born wrestler from the Sierra Nevada Mountains in California was the best 185-pound fighter that Strikeforce had to offer. Shields submitted Lawler in two minutes, put on a five-round grappling clinic against Miller, and ate Henderson’s “H-Bomb” in the opening moments of their bout and then outclassed “Hendo” for the following four rounds. Shields will bring this impressive resume of wins into his UFC middleweight debut at UFC 150 against Ed Herman and into a division that in recent weeks has had a complete competitive renaissance.

“I want to go out there and be as exciting as possible, as explosive as possible, and I want to finish him,” asserts Shields. “I want to show that I'm a contender at 185. I was a contender before at 185 and I want to get my name into title contention. I think the 185-pound division is up for grabs right now for the next title shot. I want to beat up Ed Herman really bad and then call out one of the top contenders to get myself closer to the title.”

Before the battle with Herman in Denver, the 33-year old returned to his winning ways in a welterweight unanimous decision win over Yoshihiro Akiyama in February in Saitama, Japan. At UFC 144, Shields capped off a 2-2 welterweight stint inside the Octagon, which featured a title shot against current champ Georges St-Pierre in front of a historic 55,000+ crowd at UFC 129 in Toronto, Canada. The victory over Akiyama in Japan was Shields’ fifth bout and third win in “The Land of the Rising Sun” over his incredibly well-traveled career. Also, it was a nice stiff transition for Shields, as Akiyama typically fights at middleweight and dropped down to welterweight as Shields prepared to do the opposite.

“Akiyama is a great opponent, a tough fighter,” says Shields. “It's definitely cool going back and competing in front of the Japanese fans - they have some of the best fans over there. I felt going in there, I really needed a win coming off a loss. I went out there just looking to get the win. I was expecting him to be tough and he was tough. I've watched his fights. He's got good hands and people have trouble taking him down. I was expecting a tough fight and I got a tough fight. I'm definitely happy. I feel like Akiyama is a great fighter and I beat him, but I felt like I could have done better.”

The W helps, but bouts like the one with Akiyama are not the type that get the crowd cheering or make the fighters in them satisfied with their performances. For Shields, it is a case of “it takes two to tango” where his opponent would rather pick punches from the outside and stay as far away as they can from his vaunted amateur wrestling and black belt in Brazilian jiu-jitsu. It’s an issue that Shields has been known to deal with as well as his illustrious teammates from Cesar Gracie’s gym: Nate Diaz, Nick Diaz, and Strikeforce lightweight champion Gilbert Melendez. Sometimes MMA is more sport than scrap, which is not what the Stockton and San Francisco-based fighters are looking for when they enter the Octagon.

“A lot of guys are moving backwards and then picking their angles and trying to stay away from going to the ground with me,” explains Shields. “I understand and don't blame them for it. They're trying to find the best way to beat me. It was the same with GSP. I certainly don't blame these guys for it. It's a strategy. Stick and move, and avoid going to the ground. It's a way to win. GSP is the champ, Akiyama is coming off some losses, and they want to find a way to win. Sometimes that makes for a less exciting fight. Anything can happen. You never know, Ed Herman could try to use that same strategy from watching my fight with GSP. I'm ready for anything. From his past fights, he likes to come straight forward and turn it into a brawl and I'm excited for that.”

Up next for Shields is a mile-high matchup with The Ultimate Fighter season three runner-up, “Short Fuse” Herman. The 31-year old has an overall record of 20-7, with the majority of his wins coming by submission finish. After suffering a terrible knee injury in his 2009 bout with Aaron Simpson, Herman sat on the shelf for nearly two years before returning to action with renewed purpose and skill, scoring back-to-back-to-back slick stoppage victories over Tim Credeur, Kyle Noke, and Clifford Starks all in just over a year. Without a doubt, this is the best version of Herman the Octagon has ever seen.

“I've been watching Ed Herman a lot and he likes to come in and fight,” reveals Shields. “He's not a guy who likes to dance around or run. He likes to come forward and fight and I want to come forward and fight him. I think stylistically, it should be a really exciting fight. I did know about him and have heard his name for years and have seen him fight a couple of times, but I never really studied him until now. I think he's a much improved fighter. I always thought he was decent, but wasn't super impressed with him when watching his older fights. In his last several fights, it looks like he's improved a lot. His boxing, his jiu-jitsu, he looks like a really tough fighter, so it's a fight I'm really excited for. We're both really good grapplers with a lot of submission finishes. He likes to come and bang on his feet. A lot of guys who fight me don't want to go to the ground, they want to stick and move on the feet, which I can't blame them for. It's a strategy that others use, but Ed Herman most likely will come forward and try to take my head off. That makes for a really exciting fight.”

To prepare for Herman’s hustle, Shields has been literally training all over the world in addition to the uniformly world-class training he gets at home with the Diaz brothers, Melendez, and the rest of the Cesar Gracie Fight Team. A little farther south in California, Shields put in three weeks with the UFC fighters at Alliance in San Diego. Being able to roll with some bigger bodies like light heavyweights Brandon Vera and Phil Davis - especially as they have both been getting ready for their UFC on FOX fights last weekend - has helped immensely as Shields is moving up to middleweight. But Shields’ biggest sparring buddy was the greatest distance away and it truly made this an international training camp.

“I've been in the sport for so many years and you meet so many people out and around,” tells Shields. “I think I'm friendly and I get along with most people, so I meet lots of fighters here and there. I ended up in Abu Dhabi. [Sheik Tahnoon Bin Zayed Al Nahyan] is a huge jiu-jitsu fan and started Abu Dhabi Combat Club and he invited us out as guests to come train with him, which was awesome. He's a huge UFC fan, obviously, as he’s a partial owner who bought into the UFC. He invited me out to Abu Dhabi to train with him, which was a great experience. When I was out there training with him, Alistair Overeem was out there, so I got to train with that monster as well. That's one big dude. Training with him is not much fun (laughs). It's great training with different people because everyone has a different style and you can see how they attack, how they defend. You train with these people and you see how they do these things. Generally, we spar and we don't spend too much time trying to teach each other, but you learn by seeing how they do these things.”

Most importantly, Shields feels good, great, and, possibly, better than ever before. Shields now divulges that the cuts to welterweight were impacting him physically, which carries over to confidence mentally.

“There's a big, noticeable difference for me when training,” admits Shields. “At 170, I would feel great throughout most of the training camp and then the last few weeks when I'm dropping the weight that's when I would start feeling myself drop off. I would feel great throughout most of the camp and the last few weeks I would feel weaker and not feel like myself. That's when I decided it would be a better move to just move up. I'm a small 185 pounder. It's just eating more and eating all the time. At 170, I'm watching what I'm eating and not eating as much. Now, I'm eating as much as I want and just eating more protein, having a couple more protein shakes a day. I don't get to have as much protein when I'm at 170. I'm not going to have a big weight cut. Hopefully, I just feel the same way I do when I'm in training camp.”

This Saturday, Shields will strive for middleweight gold by first tangling with Herman. “I think we're both going to go out there trying to finish each other, which should make for a very exciting fight,” states Shields, who will continue his journey toward a UFC belt and being the best martial artist he can be with many, many miles left in his tank. “This sport is young and the fighters are getting better all the time. If you stop evolving you're going to fall behind, so I am always trying to evolve as a fighter. I still feel like I'm getting better and I still feel like I've got a ways to go.”