Michelle Waterson-Gomez was supposed to make her 2022 debut much sooner than this weekend, when she takes on Amanda Lemos in Saturday’s co-main event, but the veteran strawweight was instead forced to address an injury situation that presented possible career-ending implications if left unattended.

“It was probably a combination of both,” Waterson-Gomez said on Wednesday morning, when asked if the undisclosed injury was a flare up of something old or something entirely new. “Any time you get an injury, it’s kind of that way.

“When you’re an athlete, you always try to push through small injuries. It’s inevitable that you’re going to run into little bumps and bruises, but this was one that needed to get taken care of and addressed, otherwise it was going to affect my career.”

A career-threatening injury is the kind of thing that could have left the 36-year-old pondering whether it was time to close this chapter of her life and move on to something else, especially after more than 15 years spent competing and with plenty of opportunities available to her outside of the Octagon.

But rather than use this injury as a chance to contemplate her next step, she quickly focused on fixing the problem and moving forward in her career, believing she’s still got plenty of good years left.

“I don’t think there was any consideration of that, and if there was, I don’t think I should be fighting,” she said in regard to retirement. “If those thoughts are entering my mind, it’s a very dangerous place to be as a fighter — being one foot in, one foot out. 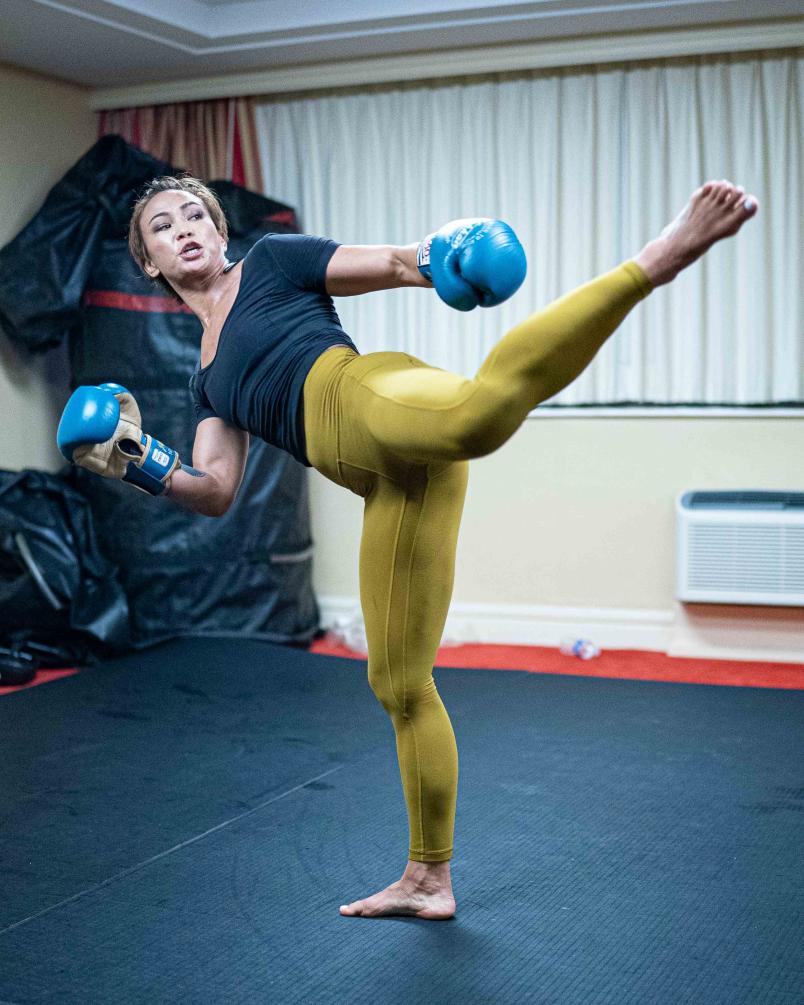 “This was one of those things where I could continue to try to push this, walk into the Octagon compromised, and then really have it be the end of my career, and I didn’t want that. I still believe I’m in the prime of my career as a fighter — I’m only 36 and still competing against the best of the best, and I know I’m just one fight away from fighting for that championship belt, so it’s important to take care of my body; to give it the healing time it needs and deserves.

“I’m in the best shape of my life coming off of that,” added Waterson-Gomez, who has been a fixture in the Top 15 since arriving in the UFC following a four-fight run under the Invicta FC banner, where she won and successfully defended the atomweight title. “I think you don’t realize what you have until it’s gone, and I have a deep respect for my body and the things that it allows me to do.

“I’m going into life that way now — like, holy moly, I have the opportunity to get up and use my body, and make it what I want it to be, and it’s really been paying off. I’ve been hitting every training session at 110 percent, emptying the gas tank in every session, and leaving no stone unturned, and it shows in my body, in my conditioning, in my cardio.”

While the life-long martial artist and long-time Jackson-Wink MMA representative didn’t consider hanging up her four-ounce gloves when confronted with her injury earlier this year, Waterson-Gomez did spend some time last year reflecting on her career inside the cage. 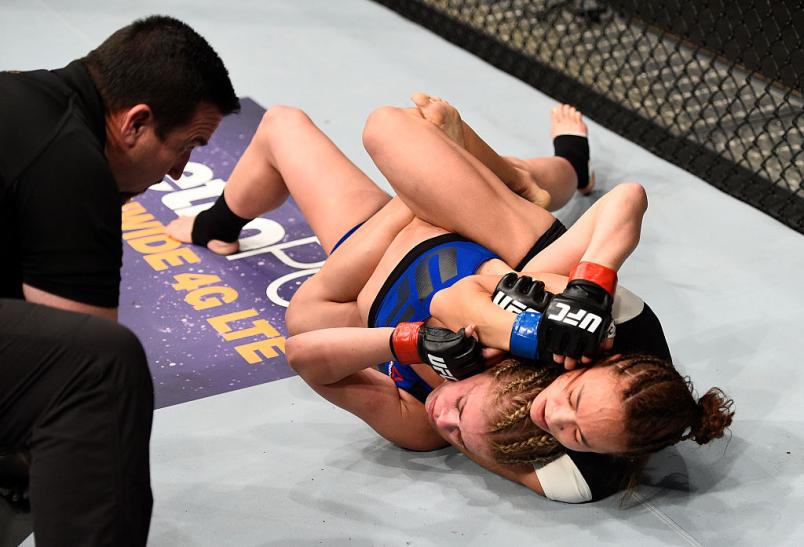 Michelle Waterson secures a rear choke submission against Paige VanZant in their women's strawweight bout during the UFC Fight Night event inside the Golden 1 Center Arena on December 17, 2016 in Sacramento, California. (Photo by Jeff Bottari/Zuffa LLC)

Cast in the upcoming Gareth Evans Netflix project Havoc, an action-thriller starring Tom Hardy, Forest Whittaker, and Timothy Olyphant, Gomez used her time filming in Wales to shift her perspective, embracing all that she has accomplished instead of fixating on the achievements that have eluded her to this point.

“I think it’s important to have goals, but it’s also one of those things where sometimes you have goals and you don’t hit them, and you get so down on yourself, but in doing that, you don’t realize all the progress that you’ve made,” she began. “Having this time away and being in Wales filming that movie gave me a lot of time to reflect on my MMA career, and I’ve done so many amazing things.

“I’m a champ at atomweight and I still live a championship lifestyle. Every time I go into camp, I go into camp with the expectation that I can go five five-minute rounds with the best of the best. Every time I think about it, I guess I just never realized what I have accomplished, and I’ve been able to accomplish a lot.

“Since I’ve been in the UFC, I’ve fought pretty much nothing but Top 10ers,” continued Gomez, who has garnered victories over Paige VanZant, Karolina Kowalkiewicz, and Angela Hill, while also sharing the cage with current champ Carla Esparza and former titleholders Rose Namajunas and Joanna Jedrzejczyk. “I’ve fought (three champions) and fought in four main events; have gotten Fight of the Night, Submission of the Night — so many amazing things that I’ve been able to do in my career that I overlooked because of a decision loss against someone that I took the fight against on a week’s notice.”

“That’s not something I should hang my head for, so I’m just going into this next fight on Saturday knowing that I belong.”

She’ll look to do that by toppling Lemos, a hard-hitting Brazilian making a quick return after being submitted in the first round by former champion Jessica Andrade just a couple of months ago.

RELATED: Amanda Lemos Gets Right Back To Work

Prior to that, the 35-year-old from Belem, who enters this weekend’s co-main event positioned one spot behind Waterson-Gomez in the strawweight rankings, had rattled off five consecutive victories, including first-round stoppage wins over Miranda Granger, Livinha Souza, and Montserrat Conejo.

Waterson-Gomez knows she’s in for a tough test on Saturday, having briefly shared the mats with Lemos when the Brazilian spent some time training in Albuquerque and being aware of her exploits prior to her recent setback.

But she also believes that everything moves in cycles, just like the seasons, and after having navigated a harsh winter with her injury and blossomed anew in advance of her belated 2022 debut, Waterson-Gomez is ready to come in hotter than summer in the desert this weekend.

“Coming in super-hot!” she said emphatically, chasing her words with a laugh. 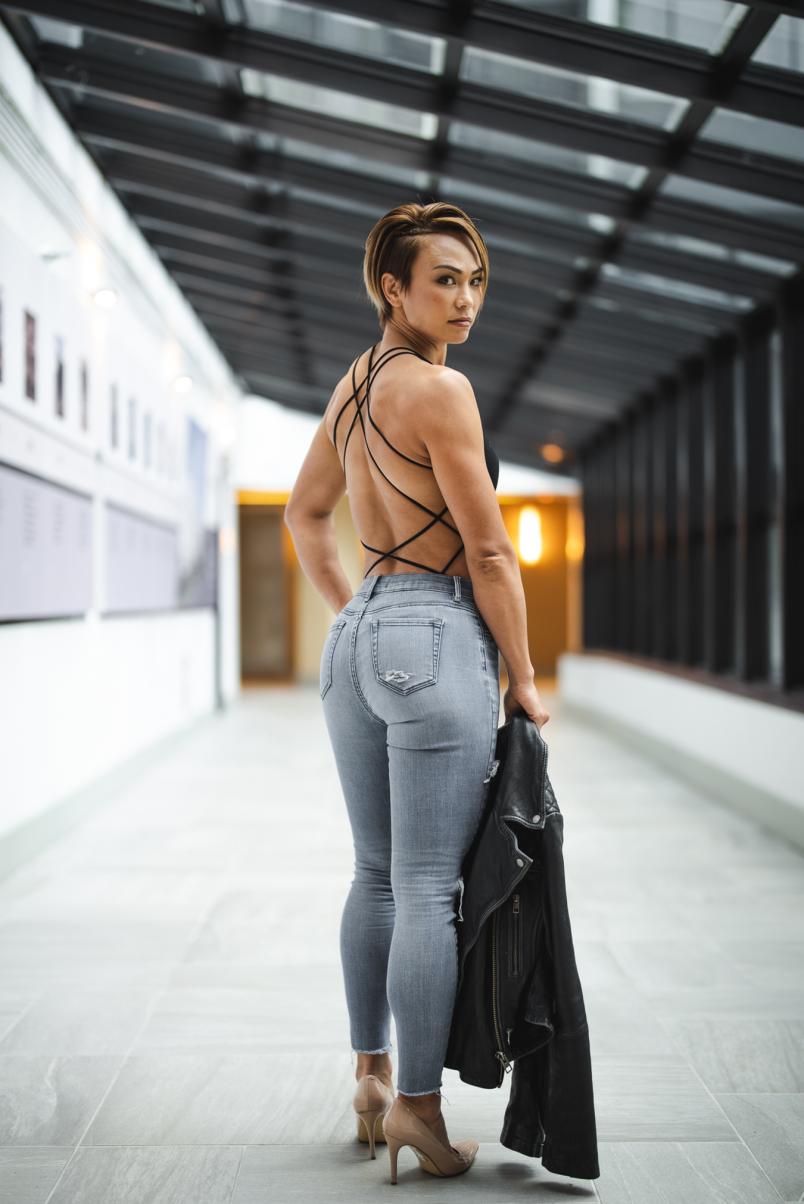 More than 15 years into her career and with a fresh outlook on things, Waterson-Gomez heads into action this weekend on Long Island looking to maintain the delicate balance every fighter must carry into each fight, and chase down that euphoric feeling that comes with putting everything together effectively once more.

“It’s that moment, it’s that high that you only get when you get your hand raised — that’s what we chase,” she said. We chase greatness, and I want those moments. I want those (slow-motion) moments where everything clicks and I’m flying, having fun, and I’m in the zone.

“I talked to Coach Jackson about this: it’s funny how you have to treat your fight or your career or any huge moment in a way where it has to mean nothing to you and everything to you at the same time.

“In the big scheme of things, this is a drop in the bucket because life is so expansive and beautiful and humungous but, at the same time, I want to win,” she added. “I want to win so badly because I’ve put so much time and effort and energy into it, so I’m just going to let both of those things happen.”