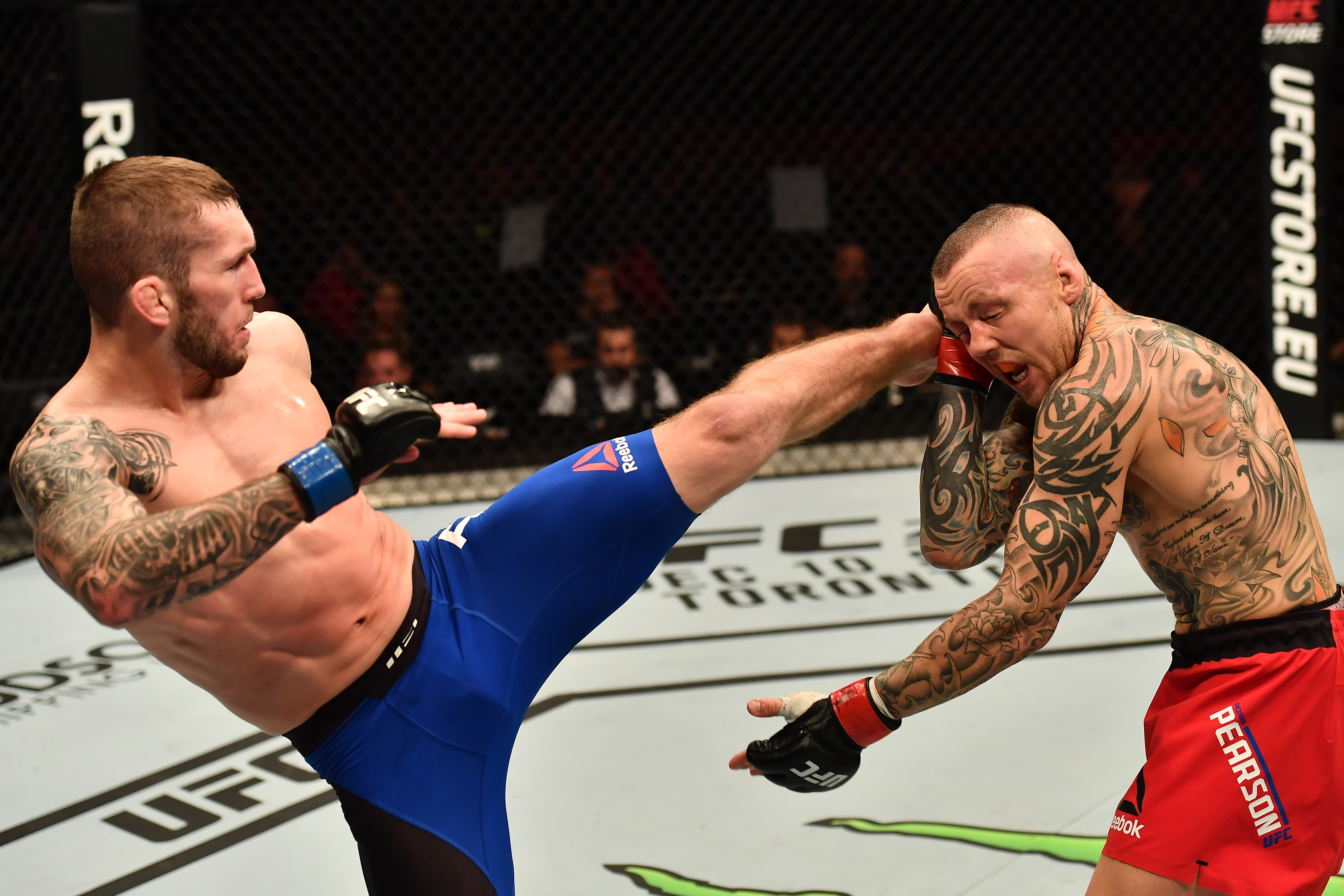 Stevie Ray of Scotland kicks Ross Pearson of England in their lightweight bout during the UFC Fight Night at the SSE Arena on November 19, 2016 in Belfast, Northern Ireland. (Photo by Brandon Magnus/Zuffa LLC)" align="center" /> Where exactly did things take a wrong turn for Stevie Ray? It hasn’t been long, a little more than a year to be precise, since the Scottish bomber was one of the hottest fighters in the UFC’s notoriously crowded lightweight division.

Then, a single violent outburst courtesy of Paul Felder changed the trajectory of his ascent towards the top. Ever since that July night back home in Glasgow, Stevie, Stevie, Stevie (expletive) Ray has been playing catchup.

That’s supposed to end this weekend.

Saturday night in Moncton, New Brunswick, the 28-year-old plans on switching from avoiding regress to attacking progress after a rough 15 months.

“I’ve had one fight this year, I lost and I haven’t been too active, so this last year has been quite frustrating since I lost to Felder,” Ray said. “I would’ve liked to be busier, but I just have to get this win first.”

If he gets the win in what will be the first fight of the night this Saturday in the Maritimes, that would be his first victory since outpointing Joe Lauzon back in April 2017. Following the knockout loss to Felder, Ray’s future in the UFC was up in the air until a short-notice opportunity against fellow Tristar fighter Kajan Johnson last March got him back under the lights. Ray lost that one by decision – “a bit controversial, but I take it on the chin.”

Having gone 0-2 in his last two, though, Ray is sure that another setback would put an end to his time with the market leader.

“If I lose, I’m most likely going to get cut, so I just made sure that for this fight camp, everything was in order. If for some reason this doesn’t go my way, then at least I know I’ve done everything in my power to give it my all.”

Ray got back to Montreal’s Tristar Gym for this one, but while choosing Firas Zahabi’s renowned training center for camp is a decision usually made based on quality criteria, for Ray, it was distance.

“The main reason I came to Tristar is because I have too many distractions at home”, he said. “It has nothing to do with the training; the training is great, my coaches at home are amazing, I’ve good sparring partners at home. But at home, I have my own business. I run my own gym, I have three kids, I have a dog, and just life in general. The one good thing about coming to Tristar is that all I need to focus on is my training. I train, eat, sleep.”

That, and sporadically going to the movies, was pretty much all Ray did for the past month and a half in the francophone metropolis that provides loads of distractions for those who seek them. Ray, though, immersed himself in the parallel society of Tristar’s fighter dorms that mainly consist of waiting for training to start over in between concrete floor, broken windows and a kitchen sink that probably has never seen much better days. Ideal circumstances to focus on what happens next door on the mats.

It doesn’t get any better than that, but Ray’s problem is: If his opponent were better now than “GSP” ever was, he wouldn’t know it. Jessin Ayari won his UFC debut in September of 2016 by decision to Jim Wallhead and hasn’t been inside the Octagon since his sophomore effort, which came in May of last year in the form of a decision loss to recent title contender Darren Till.

“I don’t like to be too specific (with my preparation), because you never know how he’s going to fight me,” Ray said of his German opponent, who came out to Florida’s American Top Team for the first time to prepare for his own back-against-the-wall fight.

“I can go watch his fights and think he’s going to fight me this certain way, and then it’s different. He’s had a year-and-a-half layoff. Who knows what he’s been doing in that time. I think he got married and stuff. His last fight was Darren Till and he took him the distance. He’s tough, it’s his first fight at 155 (pounds). So yeah, that’s some interesting stuff, but I’ve put in too much, I’ve sacrificed too much, I’ve been out here again, six and a half weeks away from my family. I feel like I’m in the best shape of my career and now, all the work is done. Now it’s just time to go in there and have fun. Enjoy myself.”

Enjoying himself seems like a tall order in a self-proclaimed do or die situation, but for Ray, maybe that’s just what it takes to get back on his finishing ways that saw him light up Glasgow’s SSE Arena with a knockout win over Leonardo Mafra on the main card of the UFC’s first stop in Scotland in 2015.

It’s certainly a fight that requires Ray’s fans to switch up their viewing habits – after appearing in co-main events and main card spots around the globe, Ray will act as the curtain jerker in his first business trip to Canada. Not that he takes issue with that.

“I probably deserve to be low on the card after last year,” he said. “I’m the first fight, (but) I prefer that – get it done early. Start it with fireworks. I get to go out there, fight, get the win and then enjoy the rest of the night. So, I’m just looking forward to that.”