Stevie Ray was a week away from packing it all in.
Away from the top tier, times can be tough for those who make a living through prizefighting. With two young children and a third due any day, Ray was facing the biggest decision of his career: To pursue his UFC dream - or face up to the reality of financial hardship and go in a different direction. 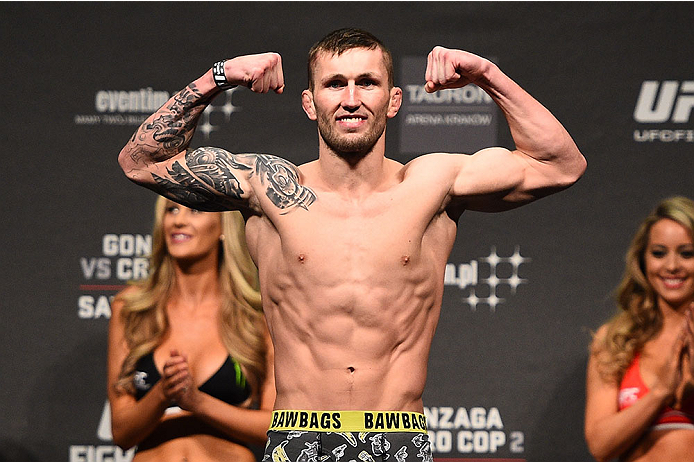 “It was a lot of struggle,” he said. “I was on welfare getting benefits. I hated it. I tried to work. It was so stressful. The amount of times I couldn’t pay my rent, it was making me do stupid stuff. Even when I had money, I nearly got into a gambling addiction. I was wanting to go and win some money and I’d end up blowing it all.”
After six years of hard graft, the Scot had earned himself a reputation as one of Europe’s finest mixed martial artists. He’d developed a cult following in his native Scotland. Dubbed ‘Braveheart’, he was known as the softly-spoken family man with a fearless approach to the fight game. People knew that when Stevie Ray was on the card, they were guaranteed fireworks. However, that talent hadn’t translated into financial security. The 25-year-old endured an agonising wait for something to spark his career to the next level.
And the clock was ticking.
Then came the call that changed his life. Jason Saggo had ruptured his Achilles tendon, leaving Poland’s Marcin Bandel without an opponent just two weeks before the UFC made its debut in Krakow. Matchmakers scoured the continent in search of a high-calibre replacement. Stevie Ray fit the bill.
“When I got the call, it was surreal,” he said. “It had always been a dream to get there, to fight for the biggest organisation in the world.”
The news was greeted with an explosion of excitement on social media as his loyal fanbase celebrated the news they’d been hoping for. They’d followed him on his journey, experienced his highs and lows, and shared his fears that he might never get the recognition his talents deserved. Finally, after years in the shadows, Stevie Ray was stepping into the spotlight.

“The fans are the ones that keep me going,” said Ray, reflecting on the special bond he shares with his supporters. “They’re so passionate. They’ve not got loads of money. They spend whatever they have to come and see me fight. My Facebook and Twitter goes crazy every fight. The way I am brings new people aboard.”
Whilst Ray was all smiles with the outside world, he knew that the opportunity came saddled with a significant sacrifice. He had to shed 30 pounds if he was to satisfy the scales and make the lightweight limit. That sort of weight cut would normally require an eight-week training camp. The Kirkcaldy native had just fifteen days.
“It was the longest two weeks ever,” he said. “I had so much weight to lose so I was never ever thinking about anything else apart from weight. Every weight cut should be easier after that.”
Against the odds, Ray not only made weight but put on the performance of his life in beating Poland’s submission ace at his own game. The home crowd roared at first as Bandel looked to secure one of his trademark leg locks in the opening frame. Unperturbed, Ray responded with some excellent jiu-jitsu of his own. He looked set to force a tap only for the horn to intervene at the end of the first stanza. When Bandel made a momentary mistake in the second, Braveheart took control and pounded his way to a TKO win.
After years of struggle, Stevie Ray had become an overnight success.
In an emotional post-fight speech, the Scot set his sights firmly on a return to Glasgow at the SSE Hydro Arena for UFC Fight Night. His wish was granted. This weekend he’ll square off against Brazilian Leonardo Mafra. Having sacrificed so much to reach the UFC, he aims to set about repaying the faith of his fans – and securing his family’s future.
“The next dream is winning that £50k bonus,” he said. ”That would change my life even more. I’m going for it. I’m going to be looking to put on a show for the fans.”
Ray has no doubt about the significance of the moment when he steps through the curtain in front of his countrymen for the first time as a UFC fighter.
“When I walk out, it’s going to be absolutely crazy,” he said. “My fans are really noisy. There’s going to be 10,000 Scottish people all chanting my name.”
Yet don’t expect the proud Scot to let the emotion of the occasion affect him. He’s travelled too far, for too long, to lose his focus now.
“Every fight, I’m focused,” he said. “Just me and the other guy. You’ve got to believe in yourself. I believe in my skills. I feel all-round in my game. I believe I can beat anybody, anywhere.”
Focus and belief: two words that truly define the Stevie Ray story. The next chapter unfolds this weekend.

Ralph Welch is a Mixed Martial Arts columnist who has been featured in BT Sport, The Mirror, The Underground and other outlets. Follow him on Twitter at @ralphwelchMMA.