"All that matters is that my hand gets raised, and then I’ll move on to the next one." - Steven Siler 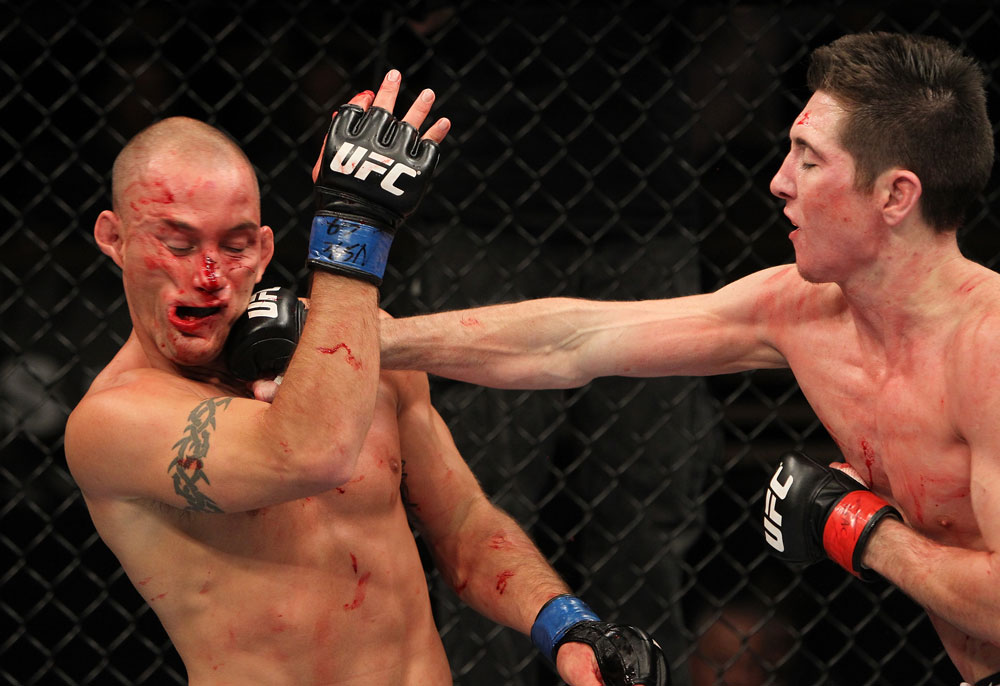 Every sport has them – those athletes who catch you off guard. Their names are familiar to you, and you’ve seen them do their thing on their respective playing field, but for some reason, their talents and successes never jump out at you.

The unheralded third baseman that leads the league in RBIs. The running back that managed to pile up 1300 yards without anyone really taking notice.  The big man that quietly goes about his business in the paint, putting up 16 points and 10 boards a game while serious fans still don’t know his name.

In the UFC featherweight division, Steven Siler is that guy.

While the division has gained an increased share of the spotlight in recent years as established names migrate to the 145-pound ranks from the lightweight division, and contenders like Cub Swanson, Chan Sung Jung, and Chad Mendes earn recognition as they chase after champion Jose Aldo, Siler has been operating in the cut, quietly racking up wins, looking more impressive with each outing. It’s been that way for a while.

After starting his career 5-7, Siler has amassed an impressive 16-2 record over his next 18 professional bouts, the only losses coming to aforementioned former title challenger Chad Mendes, and former WEC champ Cole Escovedo.

During his stint on Season 14 of The Ultimate Fighter, Siler, who gained entry into the house by earning a third-round submission win over one of the early favorites, Micah Miller, was portrayed as a secondary character, edited into the background as a bundle of nerves and uncertainty. He lost to eventual featherweight winner Diego Brandao in the quarterfinals, but has continued to experience nothing but success when it counts.

“Even during the show, my confidence was sky high,” says Siler, who faces fellow surging featherweight Darren Elkins at UFC 154 in Montreal, Quebec on November 17. “I have no doubt about how good my skills are. I knew how good I was in the house. You know, everybody gets caught. Diego caught me with a good punch, I went out; that’s what happens. Nothing has ever changed my confidence; I’ve always been 100% confident in my skills.”

Beginning with his win over Josh Clopton on the show’s finale, Siler has earned a three-straight wins inside the Octagon, improving with each subsequent outing. He followed up his debut win with a dominant decision win over Cole Miller, giving him a 2-0 record against the Georgia-born, American Top Team-trained version of The Fighting Miller Family. Three months later, Siler made it three-for-three with an impressive first round win over UFC newcomer Joey Gambino.

Though he credits training alongside fellow Ultimate Fighter veterans Court McGee and Ramsey Nijem with helping him acclimate to the procedural flow and professional nature of fight week in the UFC, Siler admits that he was still experiencing “Octagon jitters” while standing in the cage with Miller back in March.

“I was around when Court made The Ultimate Fighter, and around for his finale fight, and then I was around when Ramsey made it to the finale before I made it to the house. I was around the environment quite a bit, so it was easy to get used to. It definitely helps out a lot. Being around the environment makes it easier to calm down the nerves a little bit; you don’t have the shell shock of being on the show. I saw how it all worked out before, so I knew what to expect, and it was easy to adjust to.

“Octagon jitters are there; they’re real,” Siler continues with a chuckle. “My very first fight in the UFC – and even the Cole Miller fight – I was thinking at one point, `Oh my God! I’m in the cage with Cole Miller.’ I was thinking that in the middle of that fight. Now I know I deserve to be there. The nerves are going away, I know I belong, and the sky’s the limit from here on out. I know I can compete with anybody.”

That increased sense of belonging could prove to be dangerous for the rest of the division, beginning with Elkins. Through his first three appearances in the Octagon, Siler has proven himself capable when standing and on the ground, and expects to see continued development in both areas under the watchful eyes of the coaching staff at The Pit Elevated.

“Since the show, that’s when we started lining up with Coach Hack and The Pit,” offers Siler. “Coach Hack” is John Hackleman, the highly respected head coach whose gym, The Pit, rose to prominence as its most famous student, Chuck Liddell, ascended into superstardom inside the Octagon. “Now we have Jason Mertlich and Coach Hack working together as a team, and using both coaches, my striking has gotten a lot better with Coach Hack, and my ground has gotten a lot better with Coach Mertlich. I feel a lot more like a complete fighter nowadays than I did then, that’s for sure.”

Siler and Elkins share a similar profile. Both enter the contest on three-fight winning streaks, but remain somewhat under the radar in the featherweight ranks. While nothing jumps off the page at you when scouring their resumes, the UFC 154 combatants are a combined 7-1 in the UFC.

Even though there are more prominent names in the division, Siler views Elkins as the perfect opponent at this stage of his development. While he wasn’t surprised with the matchup, he remains confused as to how the two featherweights who are a combined 6-0 in the division have been relegated to the Facebook portion of the UFC 154 fight card.

“I was hoping maybe they’d change up the card a little bit; maybe move me up to the FX portion,” admits Siler of being scheduled to open the November 17 show at Montreal’s Bell Centre. “I’m hoping things change. I think our fight is more significant that a lot of the bouts that are on the FX and even the pay-per-view portion, so hopefully the UFC moves it up to TV so that at least I get FX.

“Darren Elkins was actually the exact opponent I thought would be perfect for me because he’s coming off a big win over Diego (Brandao), who beat me inside the house. I wanted someone else who was on a win streak, and Darren made perfect sense. I can – in a way – redeem my loss against Diego by going through Darren Elkins.”

Rather than double-back and avenge his loss to Brandao, Siler is focused on earning his fourth straight win, and then moving on to bigger and better things in 2013.

“I’d rather just keep on moving up the ladder,” suggests Siler. “I think Diego has gone backwards since he had that loss to Elkins, so once I beat Elkins, I think it’d be nice to get a top 10 opponent, and then slowly make my way up to Jose Aldo or Frankie Edgar if he wins the title.”

First up, of course, is Elkins, and Siler knows he’s in for a tough fight when the two step into the cage in Montreal.

“He’s a very good wrestler, so I’m going to have to defend a lot of takedowns, (and) I definitely know the kid can take a beating,” offers Siler in assessment of Elkins. “I watched the Diego fight – I was there at UFC 146 – and saw what he went through with flying knees, overhands, and just taking some punishment, and he kept on coming back. Even in some of his other fights, he’d put himself in bad positions, but he seems to always be able to work his way out. He’s very gritty, and I’m looking forward to fighting someone that can push me to my limits.”

Three consecutive victories, 16-2 over his last 18 fights, and yet he’s still on Facebook and flying under the radar in the featherweight division. Plenty of fighters would be kicking up a fuss if they were in a similar position – demanding more respect while flaunting their resumes – but not Siler.

“All that matters is that my hand gets raised, and then I’ll move on to the next one.”