"Every fight, win or lose I go right up to (UFC matchmaker) Sean Shelby
and tell him I'm healthy, I will fight next week if you need me to." - Steven Siler 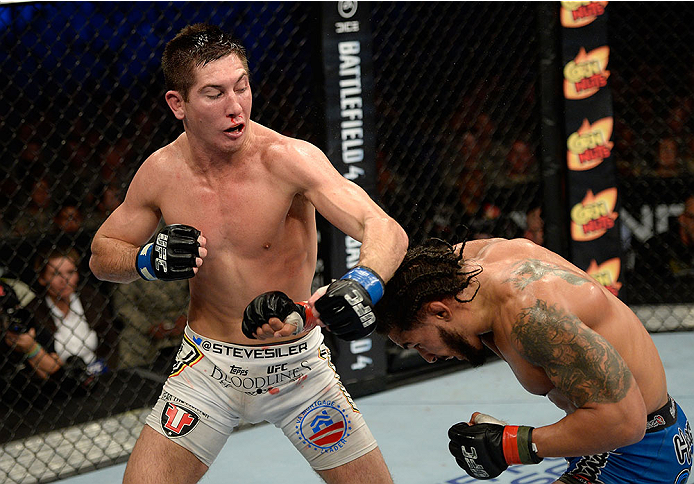 When TUF 14 alum Steven Siler faces off against TUF Brazil 1 winner Rony Jason at UFC Fight Night: Shogun vs. Henderson 2, you can expect fireworks in this preliminary bout.

"He's throws unique strikes," Siler, 27, says of his opponent. "He's fearless, he throws flying knees and it's good to fight someone like that because he's not afraid to engage and neither am I. I think he's really well-rounded and I'm expecting a tough fight."

Well-rounded is something Siler hears often about his own fighting skills. He trains with the likes of Josh Burkman, Ramsey Nijem and Court McGee at The Pit Elevated in Ogden, Utah, and the high elevation is something that fighters usually tout as an advantage when facing an opponent who grew up at sea level, like Jason did.

But just as one would not expect the baby-faced, self-described fight nerd to be as dynamic as he is in the cage, he also surprised me with his answer.

"A lot of people ask me about the elevation advantage, but to be honest, I failed geography so many times I couldn't tell you the elevation in Brazil to save my life," he said. "I just hope I don't get tired in any fight."

Siler, whose nickname is "Super," began fighting on local television before he took one day of mixed martial arts training. Twelve times in fact.

"I didn't expect to take it anywhere, and I thought being on local TV was just cool,” says Siler. "I already had a high-paying job here on the Air Force Base in Utah and I was just doing it for fun. How cool is it to be on local TV and get paid to fight? I didn't expect it to ever take off and I'm fortunate that it has because it's given me a life I never thought I'd have."

That life included a stint on The Ultimate Fighter, where he defeated Cole Miller's brother Micah in the first episode before losing to Diego Brandao via flying knee in his next bout. That didn't stop Siler from fighting on the Finale card, however, as he defeated Josh Clopton by unanimous decision. He then upset UFC vet Cole Miller at UFC ON FX2 and followed that up with a slick guillotine win against the always game Joey Gambino.

"Super" Siler was impressing his bosses and fans alike.

"I always try to be an exciting fighter," he said. "One thing that has excited me about being in the UFC is that everyone tells me I look like a nerd or the nice kid next door, and they never expect that I can fight the way that I do. I hear that I'm always entertaining to watch and I always put on a show and I hope I can keep on doing that."

Over his nine-year fight career, Siler has fought once nearly every four months, and he doesn't want to stop that pace any time soon.

"Every fight, win or lose I go right up to (UFC matchmaker) Sean Shelby and tell him I'm healthy, I will fight next week if you need me to," he said. "I want to take as many fights as I can and enjoy this ride for as long as I can. I'm 27, I'm getting up there in my career, and it's been nine years but I am always ready to fight. (UFC President) Dana White always says fighters have a short window so I want to use my window wisely and make as much money as I can."

In Jason, Siler faces a dangerous opponent who possesses power on the feet and is lauded as one of his country’s best jiu-jitsu practitioners. Siler isn't too concerned, however.

"Of course not," he said. "I feel I do really well on the ground. I have so many submission victories in my career you would think I'd be more of a submission fighter, but it's just that ever since I've been in the UFC I like the standing game, and I think he does too, so I think this fight will be a stand-up war more than anything on the ground."

And while Siler is happy to be a part of the biggest fight promotion in the world, it is a subject he tries to avoid in casual conversation.

"My wife is the one who tells everyone I'm a UFC fighter," he said. "I would rather just be known as the nice guy next door."