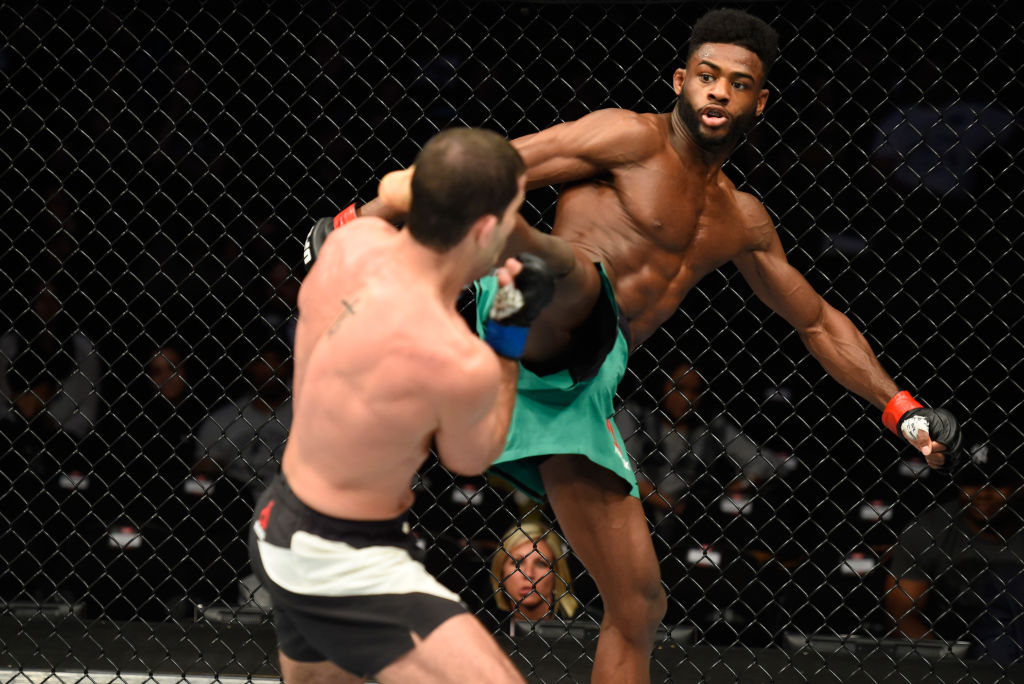 Firing bombs from the start, Sterling wasn’t landing, but he used his striking to get a takedown in the second minute. After controlling matters there, Mendes was able to use a leg lock attempt to get back to his feet, and then it was the Brazilian showing off his striking as he rocked Sterling and then nearly locked in a triangle choke. But by the end of the round, the defensively sound New Yorker got out of trouble and was back in control in the top position.

Sterling began wearing Mendes down in the second, and his pace was keeping him ahead of the game on the scorecards, and Sterling just cemented the end result in the final round, as he kept the pressure on while avoiding the last-round charges by Mendes.

The first round was a wild one, with some back and forth exchanges that were sloppy but oddly effective. Clark (8-1) did get a takedown midway through the round and landed some hard knees before the two rose, and that may have been enough to win him the round.

The second was more clearly Clark’s as he controlled the grappling throughout the frame.

Told by his corner that he had to get Clark out of there in the final round, Collier (10-4) came out fast, only to get dumped to the mat once more, and from there, Clark simply outmuscled his foe, wrapping up a clear-cut decision by scores of 30-27 twice and 30-26.

Not surprisingly, Sanchez got the fight to the mat in the opening minute, but after biding his time for the right time to move, Smith (27-12) reversed position and got on top in the third minute of the round. With 1:45 remaining in the first frame, referee Keith Peterson restarted the action, and it was Sanchez holding the striking edge for the rest of the round.

Smith’s striking was working well for him early in round two, but midway through the round, Sanchez took the Nebraskan down and kept him there, working patiently as he piled up the points.

With Sanchez (10-3) tiring in the third, Smith stepped on the gas, and he progressively got closer to landing the finisher. Eventually, a right kick to the head rocked Sanchez, and the follow-up barrage by “Lionheart” ended in, with Peterson stepping in at 3:52 of the final round.

In control from the time referee Mike England waved the fighters into battle, Cummings’ striking was sharper than ever, with his speed and power keeping Coy from getting his offense in gear. With a little over a minute left, Coy tried to switch things up by getting a takedown, but Cummings held him off and sunk in a guillotine choke that ended the fight at the 4:21 mark of the opening frame.

Unbeaten bantamweight Ketlen Vieira moved to 8-0 in the opener, winning a three-round unanimous decision over No. 13-ranked Ashlee Evans-Smith.

Both fighters had their moments in a competitive first round, but the harder punches were landed by the more aggressive Vieira. The Brazilian got the bout to the mat early in round two, and even though Evans-Smith (5-2) fought her way to her feet quickly, Vieira remained locked on to her until separating with three minutes left, and matters got worse for the American, who got tagged several times with flush shots before round’s end.

Evans-Smith drilled Vieira with a hard right hand in the opening stages of round three, but as soon as the Brazilian hit the deck, she rose and locked her opponent up against the fence. After a stalling of the action, referee Keith Peterson restarted the bout, and the busier Evans-Smith continued to press the fight, but it wasn’t enough for the judges, who declared Vieira the winner by scores of 30-27 and 29-28 twice.