When Aljamain Sterling steps into the Octagon on Jan. 28 to face Raphael Assuncao, it’s officially tip-toe time for the New Yorker. In other words, if the 27-year-old was like many of his peers, the talk would turn to taking the right fight at the right time with the right amount of time to train for that right fight.

Instead, the No. 7-ranked bantamweight, who could start planning out a road to the title if he can beat the No. 4-ranked Assuncao, is opting to leave his phone on for UFC matchmaker Sean Shelby.

“I am open for short notice fights,” “The Funk Master” said. “I have expressed this to Sean Shelby that I can be that guy. I would like to stay ready just in case.”

It’s an attitude you don’t get too often. Sure, if a fighter is in shape, a late notice bout could put a few bucks in the pocket and a win on the record. But that’s usually for folks trying to get into the top 15 and not someone firmly entrenched in the rankings.

“I want to fight, and I want to be more active in 2017,” he said. “If (Donald) Cerrone can do it, why can’t I? I think it would be cool to be able to follow that and do what I used to do. When I first started this game, I was taking short-notice fights left and right. I saw that Jon Jones did it and that’s how he got in, and that’s what I wanted to do. We used to train together and I thought that was the right way.”

Yet a close split decision win over Claudio Ledesma in just his third fight in 2011 did teach Sterling some valuable lessons about patience and finding the right balance between being ready and just taking a fight to take it. He believes he’s found that balance.

“There’s something to be said about being more active and being more comfortable in the Octagon the more appearances you have in there, and that attitude comes from just being in the gym all the time. When I’m at the gym with (coach) Ray (Longo) and everyone, they’re keeping us in good shape and they’ll give that okay if we’re ready to take a fight right now. And that’s the thing about our fight team; we train year-round. There really is no off-season. I’m always ready and we do believe in that cliché statement of stay ready so you don’t have to get ready.”

Sterling talks about getting in work while on vacation, perhaps foreshadowing a nickname switch from “Funk Master” to “No Fun,” but he’s not going for that.

“I am definitely the life of the party,” he laughs. 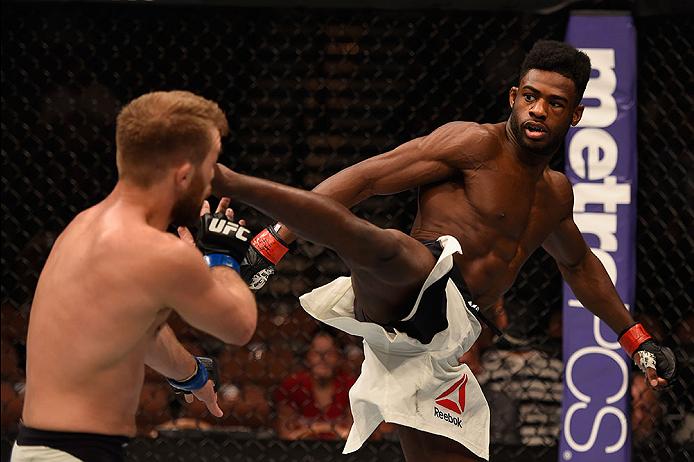 It has been a tough stretch for the affable Long Islander though. After starting his career 12-0, with four of those wins coming in the UFC, he dropped his first pro fight to Bryan Caraway last May. It was a close loss via split decision, and with Sterling being on the sideline since thanks to some injuries, it’s almost as if it’s been forgotten as he approaches his fight with Assuncao.

“I had a few of the trolls and haters try to get under my skin, but I lost a split decision fight, I almost submitted the guy with a full nelson and a rear naked choke and I was pretty much trying to make him say ‘uncle’ in that first round,” Sterling said. “And even after that, being as tired as I was, he still couldn’t do anything to put me away at all. There was no real threat of me actually losing the fight besides me getting taken down at the end of the round. I can see why I won this fight in some people’s eyes, and at worst I can see a draw. But it is what it is. I do get a lot of people who don’t really consider that fight a loss. I consider it hardly a loss, if you want to call it that.”

The first round against Caraway was a big one for Sterling, some even considering it a 10-8 on the scorecards, but the veteran came back in the next two frames as Sterling’s cardio faded.

“When I checked my gas tank, it was on E,” he said when describing the moments before round two. “If I could have done that (what he did in round one) for another round, that fight would have been over in the second round, guaranteed. But it’s a learning lesson, and that’s what a veteran does; he capitalized on my mistakes and he took advantage of a tired Aljamain Sterling. I don’t think you’re going to see that ever again. Kudos to Caraway, he was the better man that night, but I feel like my stock didn’t drop. The train probably slowed down a bit, but I think people are still riding with me and still believe in what I’m able to do.”

His previous body of work proves that he is a legitimate threat to anyone at 135 pounds, and the fact that he’s facing a top five contender in Assuncao is a sign that the UFC believes that too. Now he just has to deliver in the high altitude of Denver that he’s already spent a little time getting used to.

“I’ve heard a lot of crazy things about what the altitude can do to you, and I’ve seen it first-hand watching fights live,” he said. “So I’d rather not leave things up to chance and I want to put myself in the best position to win.