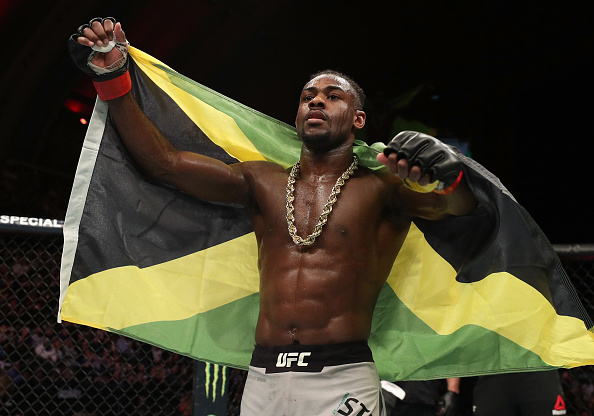 Aljamain Sterling celebrates after his unanimous-decision victory over Brett Johns of Wales in their bantamweight fight during the UFC Fight Night event at the Boardwalk Hall on April 21, 2018 in Atlantic City, New Jersey. (Photo by Patrick Smith/Zuffa LLC/Zuffa LLC via Getty Images)" align="center" />
For the second time in as many appearances, Aljamain Sterling has been contracted to fight an emerging bantamweight talent.

A little over four months after dispatching Brett Johns from the ranks of the unbeaten in Atlantic City, the “Funk Master” will square off with Cody Stamann on Saturday night at UFC 228 in Dallas. Just like Johns before him, the Michigan Top Team product has posted a trio of victories inside the Octagon to work his way into the Top 15, and he now faces Sterling in hopes of taking another step forward in the deep and competitive 135-pound weight class.

The loquacious Serra-Longo Fight Team member isn’t quite sure how he ended up becoming the guy that all the upstarts seem to want to fight and the UFC’s top choice for taking on each new threat in the division, but it’s a role he happy to fill once again this weekend.

“I think I woke up one morning and the sun glazed over my high-top,” begins Sterling. “I got up from the bed, looked out the curtains and said, ‘You know what? Someone has to keep these bantamweights in check. All these guys who are not ranked in the Top 10, someone has to go back there, slap them around and keep them in line.’

After a beat, even Sterling can’t hold back the laughter any longer.

“My last opponent was ranked in the Top 15, this guy is ranked in the Top 10, so I’ve got to go back and remind these guys who I am,” he adds. “For some reason, I seem to be the most popular guy that everyone wants to call out. I don’t know if it’s disrespect or flattering, but regardless, people are talking, they knew who I am and I guess that’s always a good thing.”

In some ways, the chance to face and potentially defeat a pair of surging newcomers in consecutive appearances is a good way for the Uniondale, New York native to further cement his standing in the division and position himself for a bigger opportunity down the line as well.

Through his first 10 appearances in the UFC Octagon, the 29-year-old Sterling is 7-3 with each of those losses coming against a Top 10 opponent. Each time he has gotten close to taking another step towards title contention, he’s run into a more experienced, more patient foe and come away with a loss.

He understands Stamann’s ambition and confidence because he was there once too, but just as Bryan Caraway, Raphael Assuncao and Marlon Moraes showed him that there was still more he needed to learn, more he needed to improve before climbing into contention, Sterling is ready to impart that lesson on another up-and-coming fighter on Saturday evening.

“Learning from all these things, I’m able to pass that knowledge down to these younger guys at my gym and it helps keep me in check into these later fights,” he says. “I’m 10 fights in now and I’m about to fight a guy who is 17-1 – he’s 3-0 in the UFC with two split decisions and one decision and for some reason, he thinks he’s the next Terminator.

“I just feel those experiences are going to help me for this upcoming fight. I don’t think he’s been put in any of those kinds of situations.”

Stamann has been rolling of late, with his tetra-pack of wins in the UFC pushing his winning streak to 10 heading into his showdown with Sterling. 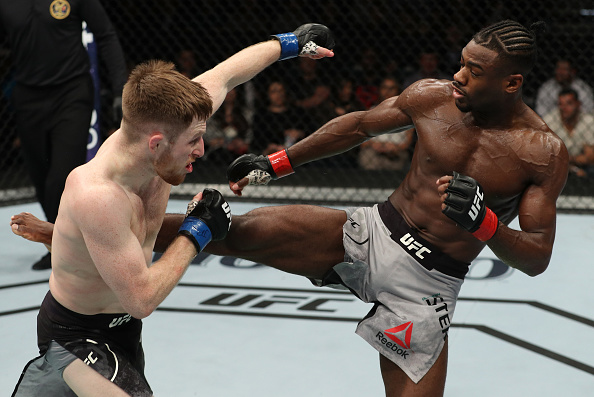 Having wrestled collegiately at Grand Valley State University, the alma mater of current lightweight contenders Tony Ferguson and Kevin Lee, the 28-year-old has relied heavily on his grappling skills and superior conditioning in posting victories over Terrion Ware, Tom Duquesnoy and Caraway since matriculating to the Octagon.

While it hasn’t been flashy and his last two wins have come by way of split decision, Stamann has clearly been doing something right.

“I think he’s a tough, well-rounded fighter and he does everything well,” Sterling says of his opponent. “He has good wrestling, he’s super-explosive, he’s smart and has good Fight IQ in terms of knowing how to secure a round or win a round.

“I hope Cody can fight as well as he talks because he talks a good game and he managed to get a fight that I don’t think he quite deserves, but we’re going to find out who is the better guy and I can’t wait to get in there and slap that guy across his face.”

As much as the quick-witted wordsmith likes delivering juicy quotes and dropping incendiary comments whenever he can, Sterling isn’t taking Stamann lightly, even though he full anticipates making an example of the ambitious Michigan native.

“I’ve got a tough guy ahead of me who is going to be looking to keep this fight standing and I’ve got to make sure that I can drag him into deep waters and put his a** away.

“There is no secret to what I’m looking to do,” he adds. “I’m going to take him down, pressure him, put him on his back and put him away; rain down some elbows in his face. Once he turns and gives me his back, I’m going to choke him out and ‘The Human Anaconda’ is going to be back.”