An action-packed night for the first ever UFC card in St. Louis was capped off with a jaw-dropping finish courtesy of Jeremy Stephens, as he put away Dooho Choi in the second round of their featherweight main event.

Stephens and Choi earned Fight of the Night honors for their back and forth battle that had the St. Louis crowd rising and falling with every punch thrown in this slugfest.

Choi landed his best shots in the opening round, but Stephens began returning fire with great accuracy and power in the second before landing a huge left hand that put "The Korean Superboy" down on the canvas. Stephens had no intentions of letting him back up again as he opened up with a barrage of punches and elbows that battered Choi until the referee saw enough to step in and stop the fight.

While Stephens had the experience advantage, he actually walked into the main event as a solid underdog with 42 percent of fantasy players picking him to win. Out of the players who did pick Stephens to win, another 56 percent correctly predicted that he would get the job done by knockout. In the end, that's exactly how Stephens finished the fight as he adds another win to his career highlight reel.

In the co-main event, Jessica-Rose Clark pulled off one of the biggest upsets of the night as she defeated Paige VanZant by unanimous decision after three rounds. Clark was selected by just 24 percent of fantasy players going into the event, but she was able to ground VanZant repeatedly over the course of 15 minutes to get the victory.

Welterweight standout Kamaru Usman was one of the biggest favorites on the entire card and he came through with a dominant victory over Norwegian knockout artist Emil Meek. Usman was selected by 74 percent of fantasy players and he did exactly as expected while staying undefeated in the UFC.

As it turns out, Usman was the only favorite on the main card to get a win based on the picks from fantasy players as Darren Elkins also pulled off an upset against Michael Johnson, who was making his debut at 145 pounds. Elkins had to fight back from a rough first round before taking Johnson to the mat, where he wrapped up a rear naked choke to get his sixth win in a row. Elkins was selected by just 29 percent of fantasy players, but he once again proved that he can never be counted out of a fight with his latest comeback performance.

On the preliminary card, local favorite James Krause earned a hard fought win over Alex White, with 84 percent of fantasy players picking him going into the card. Meanwhile, Marco Polo Reyes earned a Performance of the Night award for his stunning knockout against Matt Frevola. According to the picks from fantasy players, Reyes and Frevola were split right down the middle, with 50 percent going to each one of them in this hotly contested matchup. 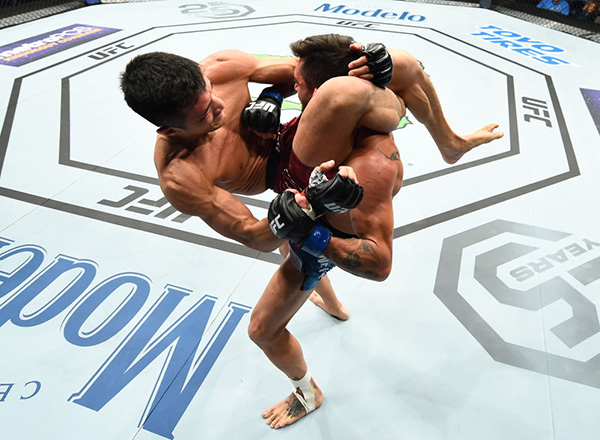 Kyung Ho Kang attempts to submit Guido Cannetti at Fight Night St. Louis" align="left" />Irene Aldana put on an impressive showing to take out Talita Bernardo in a women's bantamweight bout. Aldana was another of the heavy favorites, with 69 percent picking her to win. Kyung Ho Kang also put on a dazzling performance as he submitted Guido Cannetti after 70 percent of fantasy players correctly predicted he would get the win on Sunday night.

On the early preliminary portion of the card, Jessica Eye got back on track in her return to the women's flyweight division as she outworked Kalindra Faria to earn a hard-fought split decision with 76 percent of fantasy players picking her to win. Eye was actually the only favorite to pull off a win on the early prelims as JJ Aldrich and Mads Burnell came away victorious after both were counted as solid underdogs going into the event.

All told, UFC Fight Night from St. Louis produced a dead even card, with five favorites and five underdogs getting the job done according to the selections from fantasy players, with the tiebreaker between Reyes and Frevola ending in a 50-50 split.