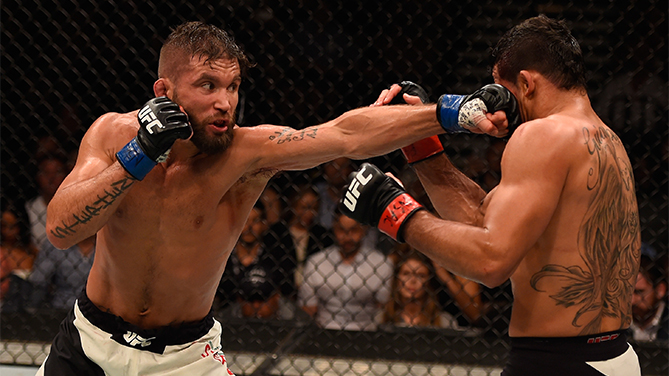 Barao was busy and sharp as the bout opened, with Stephens taking all the shots well as he fired back hard kicks to the leg. The speed of the Brazilian was proving to be the biggest difference though, not just offensively, but defensively, as he made Stephens swing and miss on several occasions.

With five minutes in the books and Barao’s attempts at taking his opponent to the mat coming up empty, Stephens began getting his timing down, and in the second minute, he rocked Barao with a hard right uppercut and a few more shots. Barao recovered quickly, but the tide was rapidly turning in favor of the Iowan. Barao, now bloodied over his left eye, finally got his takedown late in the round, but Stephens jumped back to his feet quickly.

The two featherweights continued to battle in round three, Barao getting the edge when he scored a takedown, but again, Stephens rose with little difficulty as the crowd roared. And in the final minute, it was the “Lil’ Heathen” landing the more telling blows as the bout wound down. 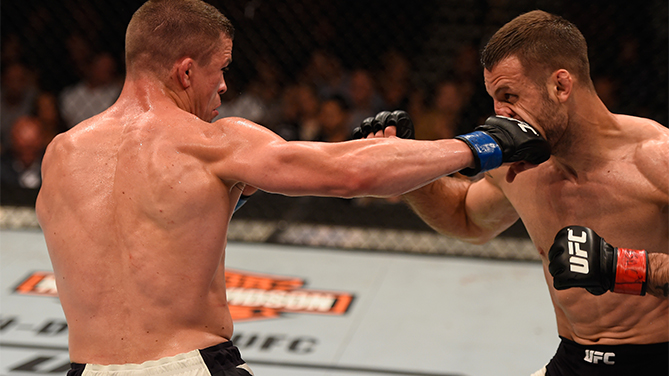 Back in the Octagon after 603 days away due to injury, No. 11-ranked welterweight contender made a successful return, winning a three-round unanimous decision over No. 10-ranked Tarec Saffiedine.

Story’s physical style served him well in the opening round, as he spent good stretches of the frame roughing Saffiedine up against the fence, with a series of body shots punctuating the round for the returning vet.

Saffiedine started off the second well with a quick takedown, but Story rose quickly and again put his foe against the fence while ripping off body punches. Saffiedine did get some knees off late in the round, but he wasn’t consistent enough offensively to take the round.

In the final round, Saffiedine finally found his range regularly, but Story was unmoved by any of the incoming fire as he kept marching forward, capping off an impressive comeback win. 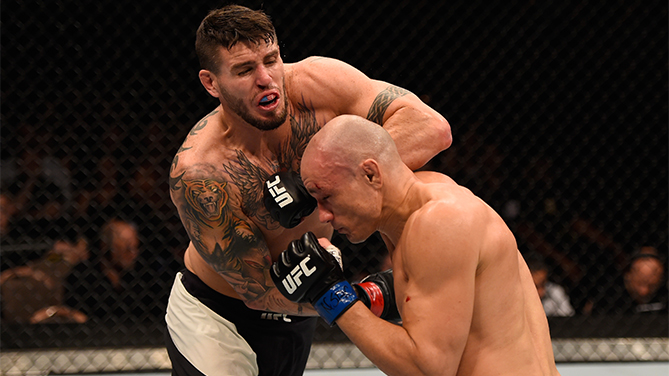 The two strikers delivered their best work on the mat, where they traded blows while locked up, Camozzi bloodying Miranda in the process. While standing, neither was able to get into a consistent rhythm.

Camozzi (24-10) dominated once he got Miranda (13-5) back to the ground in round two, continuing to mark up the Brazilian’s face with his ground-and-pound attack.

Just before round three, the Octagonside physician checked out the nasty cut on Miranda’s left eyebrow but cleared him to continue. Once the round began, Camozzi jumped into action with another takedown, but Miranda was able to get back to his feet. Showing a sense of urgency, Miranda fired off head kicks, but was unable to land flush, and Camozzi stayed busy enough while also keeping his defense tight, wrapping up a workmanlike win by scores of 30-27 across the board.

The two welterweights lived up to pre-fight expectations with high-level, back and forth striking action throughout a round only marred by an accidental eye poke by Larkin that forced a momentary halt to the bout in the closing seconds.

Larkin opened up the second round with a kick to the head that drew “oohs” from the crowd and a smile from Masvidal, who was unbothered by the blow. And though “Gamebred” kept battling on even terms with Larkin, a hard right hand and a takedown from “The Monsoon” may have been the deciding factors in the frame.

The action heated up in the final stanza, with Larkin landing more hard shots but Masvidal nearly sinking in two guillotine chokes and scoring a takedown as well. And that was just the first three minutes. The final two minutes were fought at close range in the clinch, Larkin firing knees and Masvidal using elbows to keep his scoring rate up, capping off a grueling, exciting 15 minutes.

Paul Felder took some hard shots early from veteran Joshua Burkman, but the Philly battler roared back in the final two rounds to take a close unanimous decision win.

Burkman showed off his best striking since returning to the UFC in 2015, scoring well with kicks downstairs before going to the head with flush punch combinations. After one particularly effective barrage tagged him, Felder threw caution to the win and the two engaged in a heated exchange before Burkman worked his ground game in the latter stages of the round.

Felder appeared to even the score in the second, as he began to get his striking rhythm, setting up a pivotal third round. And in that third, as Burkman’s work rate slowed, Felder had the opportunity to pick his shots even more. Burkman did pick up two takedowns in the late going, but it wasn’t enough to pull out the win.