Jeremy Stephens hasn’t so much moved on from his controversial first encounter with Yair Rodriguez in Mexico City as he’s turned the event into a combustible fuel source that he intends to set alight on Friday night in Boston.

Paired with the talented Mexican contender in the main event of the UFC’s return to Mexico City Arena in September, the highly anticipated featherweight bout was halted just 15 seconds after it began when Stephens was accidentally poked in the eye and deemed unable to continue, kicking off a chain reaction of comments, incidents and altercations that have only made their co-main event rematch this week all the more incendiary.

Disappointed with the outcome, fans pelted the cage with debris and showered Stephens with the usual assortment of boos, taunts and terribleness. Rodriguez questioned whether his foe was genuinely incapable of continuing or simply looking for a way out. The following day, the pair got into it again, exchanging heated words in the hotel, adding fuel to the fire and making it painfully obvious that pairing them off again was the only way to remedy the situation.

“None of that matters,” Stephens said on Tuesday morning with an intensity that contradicted his words and made it clear he is in no way over what transpired four weeks ago. “We’re here now and we’re bringing a big banger to Boston.

“I’m really kind of tired of talking about the eye,” he added when asked for an update on his health. “I’m here to fight. All is well — I’m healthy, I’m 100 percent and I’m ready to destroy Yair.”

In the aftermath of their brief September engagement, many in the MMA community rallied to defend the featherweight stalwart and point out the absurdity of such accusations that he was looking for a way out of the bout.

The 33-year-old Stephens turned pro five months prior to turning 21. Friday’s rematch with Rodriguez will be his 46th professional fight and 32nd appearance inside the Octagon. Although he’s put together a symmetrical record of 15-15 with one no contest verdict, the one thing no one has ever questioned is his willingness and readiness to fight.

Stephens has been on the UFC roster for a dozen years, facing off with a non-stop barrage of dangerous opponents, rising stars and seasoned contenders in two of the deepest divisions in the sport during that time. While there have been some bad losses and tough stretches scattered throughout the last dozen years, there has never been a time where the San Diego-based slugger has looked to take the easy road. 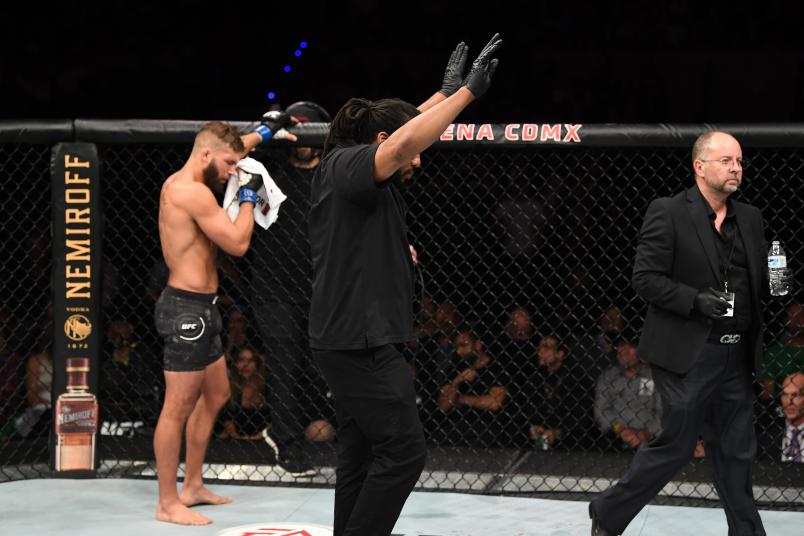 MEXICO CITY, MEXICO - SEPTEMBER 21: Referee Herb Dean ends the fight after Jeremy Stephens is unable to continue after an accidental eye poke in his featherweight bout against Yair Rodriguez of Mexico during the UFC Fight Night event on September 21, 2019 in Mexico City, Mexico. (Photo by Josh Hedges/Zuffa LLC/Zuffa LLC via Getty Images)

MEXICO CITY, MEXICO - SEPTEMBER 21: Referee Herb Dean ends the fight after Jeremy Stephens is unable to continue after an accidental eye poke in his featherweight bout against Yair Rodriguez of Mexico during the UFC Fight Night event on September 21, 2019

If anything, it’s been Stephens’ constant readiness to put it all on the line and leave it all in the cage that has allowed him to survive the ups and downs of a .500 career in the UFC.

“I appreciate the support and the help, but I don’t really need any of that,” Stephens said of the response from members of the MMA community and various contemporaries when Rodriguez questioned the severity of the fight-ending infraction. “None of that matters; it’s all bulls***. I don’t care what people think of me — everyone is entitled to their own opinion.

“I’m here to fight for me, my family and what I believe in. Things happen and it is what it is. Like I’ve said, I don’t think it was intentional. My job is to put people out of their minds and that’s what I do, that’s how I perform and that’s how I show up.

“I’m here to do my job, put this kid to sleep and move on, move up and move forward in the rankings.”

Though Stephens has always been a fiery competitor, he’s been at his best when he’s tucked those emotions away and maintained his poise inside the cage; focusing on fundamentals and the abundance of appreciable skills he possesses, rather than fighting emotionally and chasing a highlight reel finish.

While his Tuesday morning tone was one of frustration and palpable eagerness to make Rodriguez pay for the things he’s said about him, the veteran contender understands that he needs to contain those emotions in order to give himself the best chance to achieve the outcome he’s looking for on Friday night at TD Garden Arena.

“I stay cool, calm like a bomb, and when it’s my time to go off, it’s all good,” Stephens said when asked about channeling the obvious animosity he feels towards Rodriguez into useful energy on fight night. "When I fight and do my thing — when I let my hands go, my kicks, my knees; when I’m being me and I go in there and do what I do best, I put people to sleep and I’m the best fighter in the world.”

After being allotted 25 minutes of cage time for their first encounter, being booked in the co-main event means that Stephens and Rodriguez now have a maximum of 15 minutes available to them to settle their differences, though the veteran has no intention of needing the full time.

“It’s not going to last 15 minutes,” he said flatly. “I’m looking to turn it around and put him out within 15 seconds.

“I feel like this kid has backed himself into a corner and I can’t wait to put his lights out.”