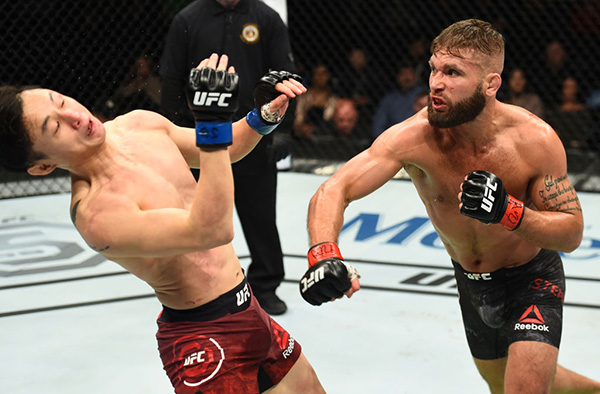 The best strike Dooho Choi landed in his UFC Fight Night main event against Jeremy Stephens may have been the one that spelled his doom, as veteran featherweight Stephens shook off the blow and went on the attack until he scored a second-round TKO of “The Korean Superboy” at Scottrade Center in St. Louis.

“There was no way I was coming here to the Midwest and losing,” said the Des Moines native.

The leg kicks were flying in the first round, Choi’s landing with more effect, but Stephens was more than willing to respond. And when it came to punches upstairs, each fighter had success and kept marching forward, showing off impressive beards.

A right front kick by Choi to open round two got Stephens’ attention and may have ignited the Iowan’s attack, as he went on the offensive with hard shots that got Choi on the defensive. Just before the midway point, a right hand knocked Choi down, and Stephens went in for the finish with abandon. After a couple more crushing shots landed, referee Keith Peterson had seen enough, stopping the bout at the 2:36 mark.