For Stephens, consistency is the key

Already putting a notch in the 2018 win column with a January stoppage of Dooho Choi, Jeremy Stephens wasn’t expecting his phone to ring with another fight for a while, but when presented with his second consecutive main event, this one on Saturday against Josh Emmett, Stephens didn’t hesitate to take the bout.

“I expected to have a little bit of time off, but I’m super excited about it because I like to fight frequently and, plus, I don’t have to do a long camp,” he said. “I’m already in great shape and I can just fine tune everything that I’ve been working on and get right into it and make some more money.” 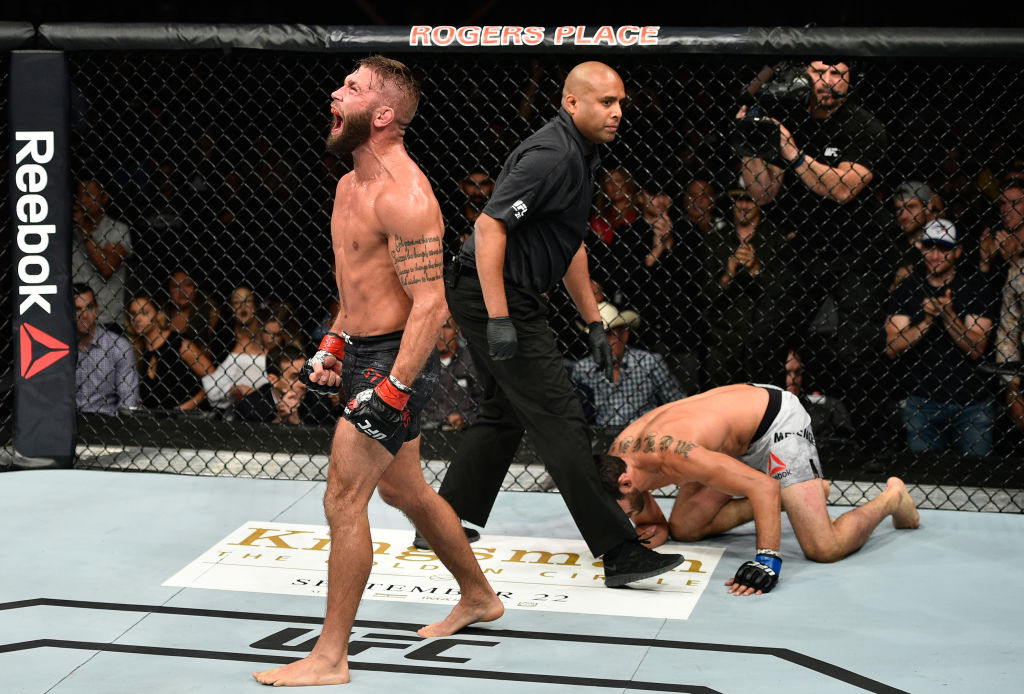 Gilbert Melendez during UFC 215 event on September 9, 2017 in Edmonton, Alberta, Canada. (Photo by Jeff Bottari/Zuffa LLC)" align="left" />If recent form holds, Stephens could be making a lot more money this weekend, considering that his last two wins over Choi and Gilbert Melendez garnered him two Fight of the Night bonuses. That’s just fine for the 31-year-old family man, who has evolved from a free-swinging brawler to a more mature mixed martial artist. And that maturity and consistency doesn’t just apply to life inside the Octagon.

“Consistency is the most important thing, especially as you get older,” he said. “It keeps the wheels spinning, keeps the opportunities coming, and you’re not ducking and dodging these opportunities or missing the ones that are coming. I’m able to live a great lifestyle by being consistent, not just in MMA, but all around.”

As applied to his day job, putting Stephens on a card guarantees a fight. He’s going to show up, put his mouthpiece in, and swing hard for three or five rounds. That’s one of the safest bets you’ll find in this game, another one being that when he picks up the phone, the first word out of his mouth is “Yes.”

Just look at his resume over the last decade-plus. Din Thomas, Rafael Dos Anjos, Joe Lauzon, Sam Stout, Marcus Davis, Anthony Pettis, Donald Cerrone, Yves Edwards, Darren Elkins, Cub Swanson, Max Holloway, Renan Barao, Frankie Edgar, Melendez, and on and on and on. That’s a frighteningly impressive level of competition and it begs the question, is there someone the “Lil’ Heathen” wanted to fight but never got the chance to?

“No,” he said. “I just get these opportunities and I take them as they come. I don’t back out of fights against anybody, and there are still some people out there that I could fight, but my only focus right now is beating the crap out of Josh Emmett next week.”

So no one? Not one guy he wants to or wanted to punch in the face?

He means it too, and he’s backed it up. Remember, it’s that consistency thing again. But he admits that value of being steady and professional didn’t start hitting home to him until the last five, six years.

“I’d say the turning point was when I was around 25, 26 years of age, and I’ve been consistent ever since,” he said. “Before, I would fight, then go party and have fun, and once I started getting my family and things rolling, I became a lot more consistent. And that comes with wisdom, age and experience. It’s all coming together for me right now, and I feel like this is the best time for me.”

Is Jeremy Stephens, the former wild child of Iowa, actually aging like a fine wine?

“I think so,” he laughs. “I’m getting better with age. Better looking as well.”

All that’s missing is a title, but Stephens expects to get there too.

“A lot of things can happen,” he said. “I’ve been in the game a long time and nothing’s promised, so I’ll earn it. I’ll make my statement by taking care of Josh Emmett and putting a stamp on getting closer to that title.”