Stephen Thompson: The Voice of Experience

"My biggest message, don't ever let anything get you down. Whatever
happens, happens for a reason, and you have to stay positive and keep on
going." - Stephen Thompson 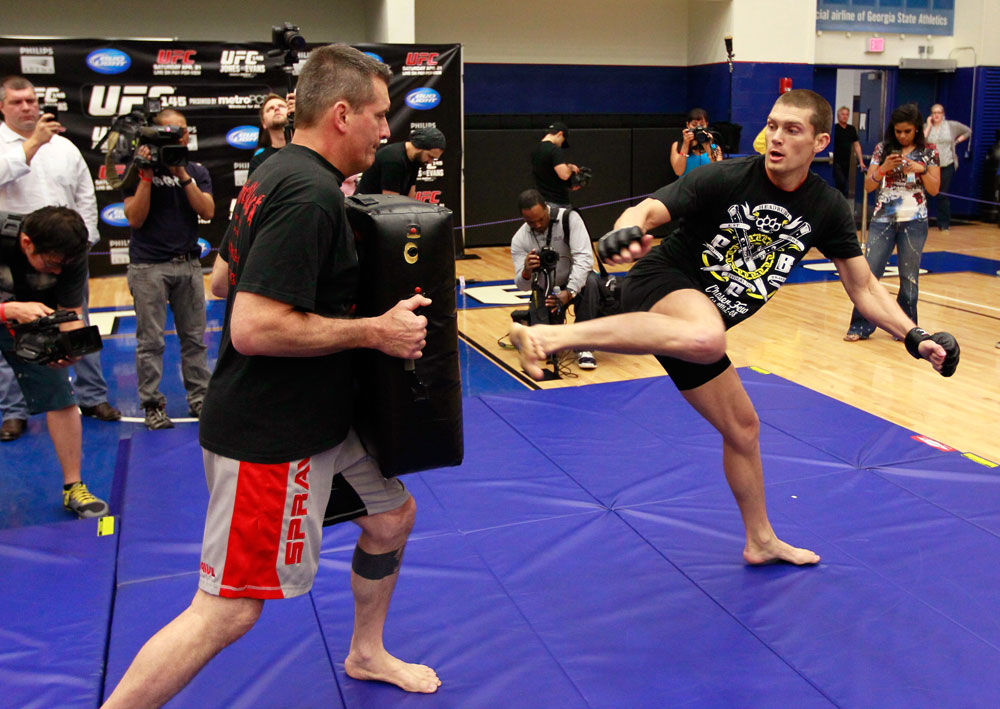 We all can learn a thing or ten from UFC welterweight Stephen Thompson.

Reason being, he has 27 years worth of martial arts experience, including a kickboxing career of legend and a 7-1 MMA record. Thompson was taught pretty much right out of the diaper how to properly strike by his 7th degree black belt in Kempo Karate-having dad, Ray. So what is the one lesson he learned he would tell to other fighters, especially younger ones?

“The biggest thing I learned in the fight game is to stay positive and keep training,” states Thompson, whose answer is as simple in theory, but as difficult in practice as throwing a perfect punch.

“About eight or nine years ago, I tore every ligament in my left leg,” reveals Thompson. “I did it fighting in the World Combat League. I wasn't fighting MMA at the time. They took 40% of meniscus out, I was out for three years, and the doctors told me I couldn't fight or do anything. That broke my heart. This is what I've been doing since I was three years old. I said screw that, nobody is going to tell me I can't do this. It really helps to have positive people around like my dad, my sparring partners, and my team at Upstate Karate. I had three surgeries on my knee and now, I'm fighting in the biggest fight sport organization in the world: the UFC. My biggest message, don't ever let anything get you down. Whatever happens, happens for a reason, and you have to stay positive and keep on going.”

Shaking Off the Rust

The proud son of Simpsonville, South Carolina’s own weighty advice came into play following only his second fight inside the Octagon, as Thompson was at the mercy of another knee injury. At UFC 143, “Wonderboy” debuted with a Knockout of the Night headkick, as many would have expected. Two months later, Thompson was dropped into the division’s deep-end with “The Immortal” Matt Brown and lost a unanimous decision. Then came the injury, plus the long 13 month road to recovery, which ended in May when Thompson took on the then 9-2 Nah-Shon Burrell.

“I wouldn't say ‘anger’, but I was itching to get back in there,” tells Thompson. “I was excited 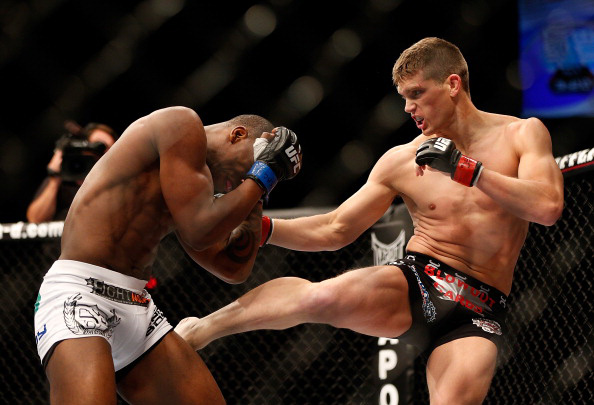 about it. When I got there, being out for a year does make a difference. I had a little cage rust when I fought Nah-Shon Burrell. But I got back to the way we trained and that's why I have good positive coaches around me like my dad, my wrestling coach, and my manager in my corner. They got me back to our game plan. My game plan was to showcase a little bit of my wrestling. And I finished the win with a unanimous decision.”

The Burrell bout at UFC 160 gave fight fans a look at some of the acclaimed standup artist’s grappling abilities. Thompson scored on half of his takedown attempts and did his best to bully and control the bigger Burrell against the cage. In his estimation, Thompson was 183 pounds fight night, while Burrell was upwards of 195. Between the ring rust and pushing around Burrell’s extra weight, Thompson was admittedly spent in that third round, but still pulled off the win. More importantly, he gave the rest of the division something to think about, as he showed he could grind them almost as well as he can stand and bang with them.

“I want to put as much out there as I can, so that future opponents don't know what to expect, and they don't know where I'm going to take it,” affirms Thompson. “That was my game plan, to go out there and shoot for a leg because Nah-Shon is always walking forward and he would run right into my shot. My game plan wasn't to hold him down or use my jiu-jitsu. It was to get the takedown and let him back up so I can strike. It was to show that control. Take him down, let him back up, control him against the cage, and use my striking.” > Watch: Thompson's debut in its entirety

Working With the Best

Besides chalking up victory number two inside the Octagon, Thompson’s striking skills were put to use in the ultra-successful UFC middleweight title campaign of Chris Weidman. A long time ago in a world pre-MMA for him, “Wonderboy” spent a week sparring with the famed Blackhouse team, including former UFC light heavyweight champion Lyoto Machida and one five minute round with former UFC middleweight champ Anderson Silva. With that hands-on knowledge, plus the nearly three decades worth of karate training, Thompson was recruited to emulate the dynamic striking and awkward angles of Silva for Weidman. At the same time, he got the chance to improve his ground game by tangling with one of the sport’s best in the new owner of the UFC’s 185-pound strap.

“You're talking about one of the best wrestlers in the 185 division and in the UFC, period,” says Thompson. “He's got such crazy wrestling credentials it's ridiculous. That's the sticky part with him is because everyone knows he's a good wrestler, but no one knows he's an amazing striker as well. Just to have a strong, powerful guy on your legs all the time, the entire time I was there definitely helped my takedown defense, but when Chris wraps your legs up - you're going to get taken down (laughs). I learned a lot from that experience.”

Up next for Thompson is a battle with a brawler on September 21st against “The Menace,” Chris Clements. Statistics aren’t everything, but Clements’ 11 wins with 10 by knockout means the Chatham, Ontario native likes to strike. The Team Tompkins prospect debuted in the UFC in 2012 by splitting the difference with a win and a loss before the latter was overturned to a no contest. The impending welterweight war should pit Clements’ grip n’ rip style vs. Thompson’s quick n’ slick style.

“Chris Clements is a monster,” tells Thompson. “He's about 5'9" and he throws his hands like it's nobody's business. His goal is to rip your head off your body. He's a banger. He's also got some takedowns and some good ground and pound. It's also in his hometown in Toronto. That's all right, I'm focused on our game plan and I'm going to go do my thing. Wherever the fight 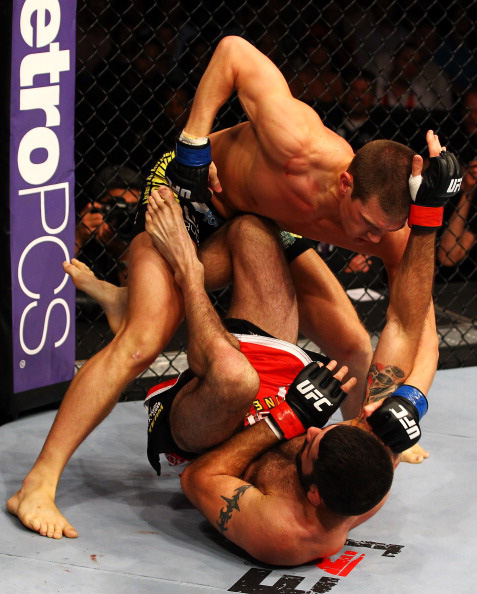 goes, I'm going to be ready for it. It's my job to go out there and do what I do best: pick him apart or take him down and submit him on the ground. Chris Clements is a very nice guy, a very honorable guy to fight and I'm looking forward to it.”

To prepare for “The Menace”, there’s no place like home for Thompson and his family’s gym, Upstate Karate, in Simpsonville. A fixture in the community for the past 30 years, Upstate Karate has been and continues to be Thompson’s striking sanctuary, where he still trains with his dad, Ray, as well as Joseph Corneroli, Robby Plotkin, and Mike “The Lion” King. Like all children of the 80s, Thompson was motivated for martial arts because of “The Karate Kid” and “Teenage Mutant Ninja Turtles,” but having a dad once known as the “Master of Disaster” in international kickboxing circles didn’t hurt. Meanwhile, his dad, Mr. Thompson, had a different catalyst; one of an entirely different color, a blue suede color.

“What really sticks out to me about my pops is that the whole reason he got into martial arts altogether - he got into martial arts when he was 18 years old - was because he was a huge Elvis fan,” remembers Thompson. “He loved Elvis Presley. He still loves Elvis Presley. He loves his music. Not a whole lot of people know that Elvis was a black belt in Kenpo karate. My dad, growing up as a kid, wanted to be like Elvis. He couldn't sing like him, he couldn't dance like him, but he went and tried this karate thing out and he's been doing it ever since.”

This Saturday at UFC 165 in Toronto, Canada, welterweights will collide as Thompson trades fists and feet with Clements. “I'm always evolving, I'm always getting better, I'm always trying to put on a good show, and I hope everyone enjoys it,” states Thompson, who has spent his entire life studying the combat arts and hasn’t let anything stop his progress. Once in the Octagon, it’s time for “Wonderboy” to show us all he’s learned by teaching “The Menace” a thing or ten.