Stephen Thompson Still On The Cusp Of Contention

In a sport that often demands selfishness, prompts competitors to constantly make a case for themselves, often at the expense of their contemporaries, and conditions everyone to believe the only way to move forward is to fight people ahead of you in the rankings, Stephen Thompson has always gone against the grain.

Coming off a disappointing loss to Gilbert Burns in July that snapped a two-fight winning streak, most would understand, maybe even expect the perennial welterweight contender known simply as “Wonderboy” to be extremely picky about whom he shared the Octagon with next.

With his resume, reputation, and ranking, it wouldn’t have surprised anyone if the 38-year-old veteran tried to chase down a second meeting with Vicente Luque, whom he beat two years ago in New York City, or a date with recent title challenger Colby Covington, looking to get things moving in the right direction by facing one of the four fighters stationed ahead of him in the Top 10.

But that’s not who Thompson is as a fighter or as a man.

“I still feel that after one or two more fights, I will be able to fight for the title again,” began the affable welterweight, who squares off with Belal Muhammad on Saturday night’s final event of 2021. “I do have to face off with some of these up-and-coming guys, such as Belal, but I don’t mind it.

“I don’t mind giving these guys an opportunity to work their way up as some of the guys who aren’t in the UFC any longer allowed me to do, like Jake Ellenberger and Johny Hendricks. They allowed me to step up and fight for that spot, and I ended up getting it, so why not give that back to these guys that are coming up now?”

Although Thompson appears physically capable of competing for another dozen years and remaining a divisional stalwart into his 50s, the reality is that he probably only has five or six years left, and a narrow window for continuing to contend for the UFC welterweight title.

He’s fought for the title twice, battling Tyron Woodley to a draw at UFC 205 before losing the rematch with “The Chosen One” four months later, and even though he’s the only Top 5 fighter current champion Kamaru Usman has yet to face, his road to another championship opportunity took a sharp left turn with his loss to Burns. 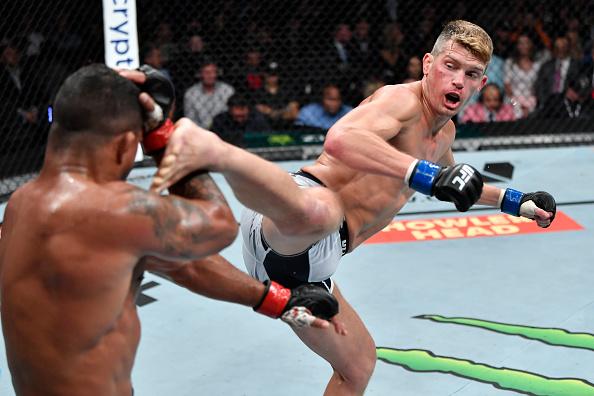 Stephen Thompson kicks Gilbert Burns of Brazil in their welterweight fight during the UFC 264 event at T-Mobile Arena on July 10, 2021 in Las Vegas, Nevada. (Photo by Jeff Bottari/Zuffa LLC)

And still, here is Thompson, coming off a frustrating setback, signing up to face Muhammad, a grinder stationed several spots behind him in the rankings, because as much as he’s focused on moving himself forward, he’s always thinking of the bigger picture as well.

“I think it’s about giving these guys opportunities,” said Thompson, who counts victories over Robert Whitaker, Rory MacDonald, and Jorge Masvidal amongst his 11 career UFC triumphs. “There are a lot of guys ranked above me that are holding onto their spots, who aren’t giving these other guys opportunities because they’re waiting for the title.

RELATED: There Is Only One Derrick Lewis | Chris Daukaus Ready To Lay Down The Law | It's 'Do Or Die' For Charles Jourdain | Fighters On The Rise | Diego Ferreira Welcomes The Pressure | Fighting Enhances The Bond Between Chris And Kyle Daukaus | Belal Muhammad's Surge To Stardom

“A lot of people are waiting in the welterweight division, but for me, I want to test myself against the up-and-coming guys, while at the same time giving them an opportunity to try and beat me. I think it’s good because it allows fresh people to try and work their way up. If he beats me, then he deserves to work his way up. It’s a way for me to kind of give back because I wouldn’t be where I am if it wasn’t for those guys me the opportunity.

“Testing myself against these up-and-coming guys like when I fought Vicente Luque and Geoff Neal and now Belal Muhammad, it lets me know that I’m meant to be here, and I’m meant to stay in that Top 5,” added Thompson. “If I get beat, well, maybe I’m not? Maybe I’ve got to go back and work on some stuff.

“As long as the guys ranked above me are up there holding on to their spots and not getting better by taking these other fights, that’s better for me.”

Okay, so maybe it’s not completely altruistic, but it’s still a rare approach, though not unexpected when you know who Thompson is outside of his career inside the Octagon.

While he’s been competing for damn near his entire life, the articulate and engaging South Carolina native has been teaching and coaching for just about as long, passing on the lessons he learned at his father Ray’s karate dojo to the next generation… and now that generation’s kids, too.

“I’ve been doing this — competing and teaching classes — for as long as I can remember,” said Thompson, the joy that coaching and working with kids brings him evident in his voice. “If you’ve never been in that kind of situation where you can teach a kid or a group of kids, there is nothing more rewarding than seeing the smiles on their faces.

“I want to set a good example for them in a loss. A lot of these kids don’t know how to lose — most of the kids don’t — but to be able to be there and show them how to do it, and it’s really cool because parents use it all the time — ‘When Mr. Stephen didn’t win that fight, did he pout about it? Did he whine about it? No, he went back and worked harder.’

“To be that positive influence for them means the world to me; it really does.”

Thompson recounted a story from after his first meeting with Woodley, where he not only came away with a draw and an immediate rematch, but a pair of black eyes and a noticeable gash on his nose as well. 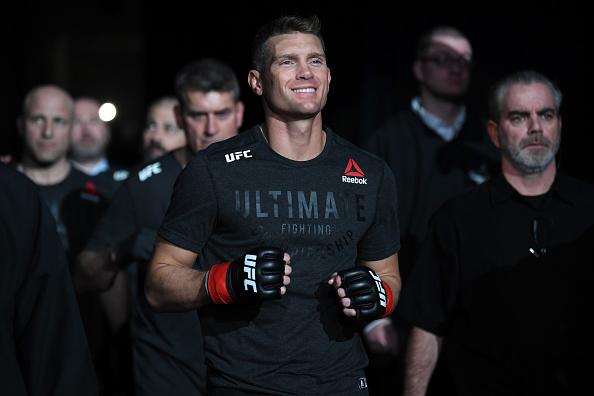 Stephen Thompson walks to the Octagon prior to his welterweight bout against Anthony Pettis during the UFC Fight Night event at Bridgestone Arena on March 23, 2019 in Nashville, Tennessee. (Photo by Jeff Bottari/Zuffa LLC)

He was nervous about turning up to lead a class looking the way he did, hesitant for the kids to see him looking worse for wear. He tried to avoid training and heading to the gym, but when one of the instructors fell ill, “Mr. Stephen” had to step up.

“I don’t know if word got out that I was kind of nervous about these kids seeing my face, but when I showed up to class, most of the kids had drawn black eyes on themselves.

“It was really cool; it brought tears to my eyes,” he added. “I could stop fighting right now and just teach; I really could. I’ve got parents that I taught when they were in elementary school and now their kids are in our training program.

Knowing that I had a positive influence on their lives to where now their kids are coming in? C’mon, man — that’s the best.”

Fortunately for fight fans, Thompson isn’t making the move into coaching full time just yet, because he still has a couple things he wants to prove to himself and the UFC, and he’s looking to do just that this weekend against Muhammad.

“I’m always excited to fight guys like Belal — he’s a good guy, an honorable man, a good athlete,” Thompson said of his dance partner this weekend, who enters on a six-fight unbeaten streak. “He’s a good dude and I’m excited to go out there and face someone like him. 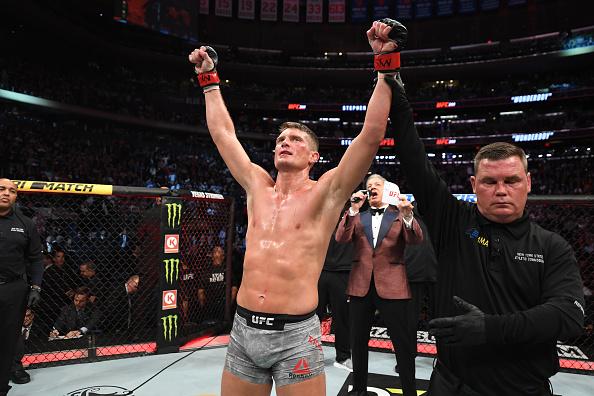 Stephen Thompson celebrates his victory over Vicente Luque of Brazil in their welterweight bout during the UFC 244 event at Madison Square Garden on November 02, 2019 in New York City. (Photo by Josh Hedges/Zuffa LLC)

“He’s very similar to Gilbert Burns, and I was very disappointed in my last performance, so I’m very happy that Belal has a similar fighting style,” he added. “Obviously they’re different, but he does like to wrestle, and I want to show the UFC and the fans that I’m better than my last performance — that I can defend the takedown, keep the fight standing, and use my wrestling.

“And you never know, you may see a takedown or two from me,” Thompson said in closing with a laugh.

Out of all of this, that’s the one thing that would be surprising and somewhat “out of character” for one of the sport’s true good guys.