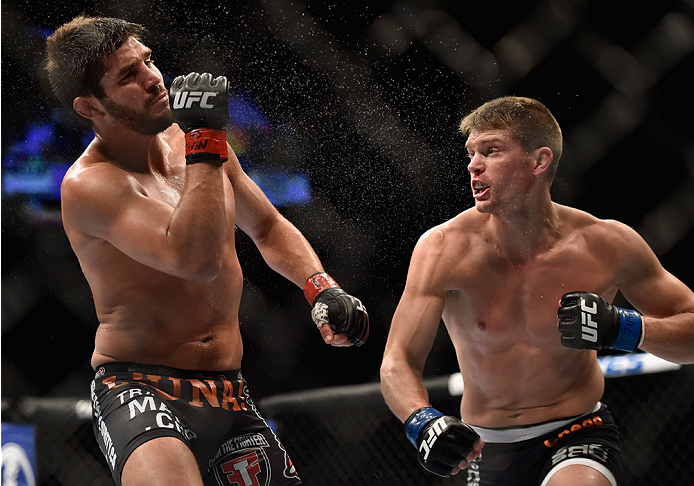 Stephen Thompson has always been a glass half-full kind of person, but when a rib injury forced him out of a February headlining gig against Brandon Thatch, it did threaten his usual sunny disposition.

“It was pretty rough,” he said. “The bad thing was, we run a martial arts school in Simpsonville (South Carolina), and we had a lot of families buy tickets for that to come out to Colorado and watch the fight. It was rough for the fact that this was my first main event and I really wanted to go out there and show the UFC and show everybody that I deserve to be in that top ten in our weight division.”

The torn cartilage in his ribs took some time to heal, but as soon as he was cleared to return to the gym and get another fight, it was as if he never left, as the UFC put him back in a main event, this one on Sunday in Las Vegas against number nine-ranked Jake Ellenberger. In a way, things have worked out better for “Wonderboy,” as he now gets to test himself against a fighter in a spot he hopes to be in by Monday afternoon.

“You can’t take anything away from Jake,” he said. “Jake Ellenberger lost to three of the top guys right now in our division (Robbie Lawler, Rory MacDonald, Carlos Condit). He just came off a good submission win against (Josh) Koscheck, and he’s the type of fighter that goes out there ready to bang it out and ready to go, no matter who you are. He’s got good wrestling, heavy hands, he’s knocked some dudes out, but I think he’s perfect for me. I want to showcase that I’m ready for that top ten in the division, that I can handle those top wrestlers and heavy hitters.”

It’s been a relatively long road to this moment for Thompson since coming into the UFC in 2012. In that debut, he improved his pro MMA record to 6-0 with a blistering head kick knockout of Dan Stittgen, but in his second Octagon bout, he ran into a brick wall in the form of the vastly more experienced Matt Brown. Thompson lost the fight via decision, but he didn’t acquit himself poorly in the bout, despite not having the ground game to match his world-class kickboxing.

“Oh yeah, I learned a lot during that Matt Brown fight with my weight cut and with my whole ground game,” he said. “I made a lot of changes and really focused on my wrestling defense, which is one of the reasons why I like going to New York to train with (UFC middleweight champion) Chris Weidman. There’s no one at 170 that’s as strong or, in my eyes, as good as Chris Weidman. It’s a big confidence builder with Chris, Matt Serra and Ray Longo at LAW-MMA, and I think I am surprising some people. Hopefully I’ll open up some eyes during this fight as well.”

Since the Brown fight, the South Carolina native has quietly won four straight, decisioning Nah-Shon Burrell and Patrick Cote and knocking out Chris Clements and Robert Whittaker. And though he’s also shown the ability to handle himself if the fight goes into the clinch or the mat, fight fans – and Thompson – were amped up to watch him throw fists and feet with Colorado knockout artist Thatch.

“I think that was the perfect fight for me,” he said. “I think my dad was more disappointed than I was. (Laughs) He was really looking forward to it. Thatch is an up and comer, he’s a monster, and he’s a big 170. I really wanted to showcase some more striking skills and hope for a good knockout during the fight. I know he would be willing to stand and go toe-to-toe with me. Hopefully we can do it again.”

No one will complain if that fight sees the light of day in the future, but in the meantime, he will face his toughest test to date in Ellenberger, and a win will undoubtedly make the statement he wants to deliver. What then for the 32-year-old Wonderboy? He’s not in a rush, but his goal is clear as well.

“I’m still learning a lot when it comes to the whole MMA game,” he said. “I came into MMA really not knowing a whole lot about the wrestling and jiu-jitsu games and I put that on the backburner when I was competing in kickboxing. So I consider myself fairly green, and I’m really not in too much of a rush for the UFC to move up, and I learned that from the Matt Brown fight. After my first fight in the UFC, they put me up against him and he’s a veteran in the UFC, and right after that fight, he went on a tear. So I learned not to rush it. But I think everybody’s noticing me at the perfect time and after I beat Jake Ellenberger, I’ll hopefully keep working my way up, and I’m going for the title.”