"What I want to show is not just that I can fight or that I've been training since I was three; I want to show what karate brings to you." - Stephen Thompson 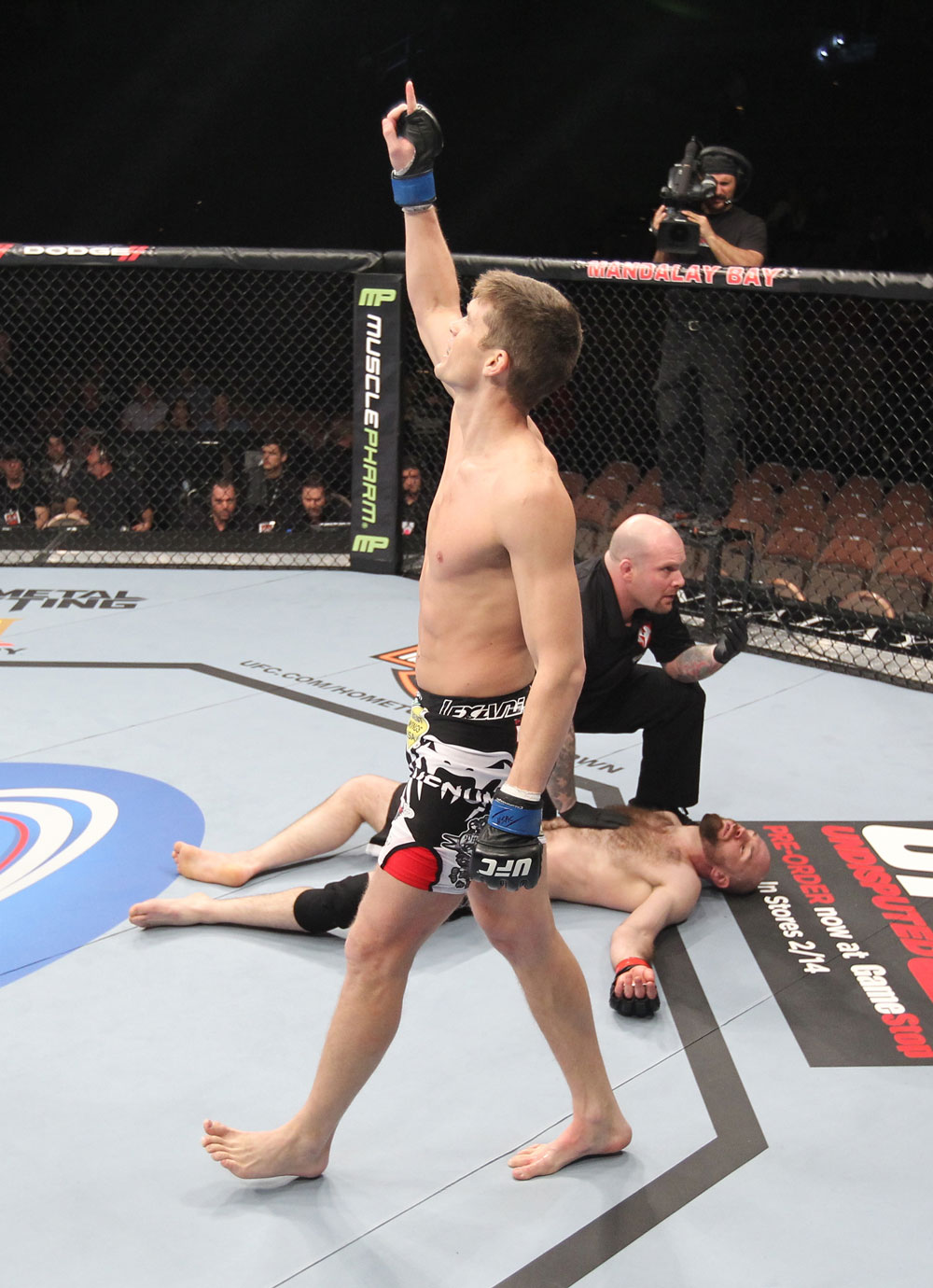 In the discussion of the most highly touted UFC prospects, Stephen Thompson is easily at the very top of that list, and rightfully so. Here are the quick facts: Thompson is the owner of a combined 57-0 record in professional and amateur kickboxing, a 6-0 pro MMA record, he scored a first round “Knockout of the Night” in his UFC debut against Dan Stittgen in February, and UFC welterweight champion Georges St-Pierre has said “Wonderboy” is the best striker he’s ever seen. But what separates him from other possible Octagon icons are Thompson’s goals both in and out of the cage, as he wants to be an MMA star and spokesman for the next generation.

At 29 years old, the self-professed “dojo rat” from Simpsonville, South Carolina is as concerned with winning his next UFC fight as he is being the head kids’ instructor at his father’s gym, Upstate Karate. The son of the “Toughest Man in South Carolina,” Ray Thompson, he grew up learning Kempo karate, alongside his two brothers and two sisters, from their father. Thompson explains that these lessons were as much about fighting as they were about building character, saying “It's not just about kicking and punching and punching and kicking. It's about courtesy, respect, indomitable spirit, perseverance - it's a good lifestyle.”

Just over two months removed from his first Octagon appearance, Thompson is scheduled to bring his talents and ethos to UFC 145 in neighboring state Georgia. “It's pretty cool, especially after my last fight, which was a spectacular knockout, but I think it is good for me to fight close to my hometown because I think I can bring in a lot of people to this fight in Atlanta,” tells Thompson, who alone teaches 650 - 700 students, which should garner quite a thunderous ovation from his cheering section(s) in the Philips Arena. “I want to show people in the world and my hometown that this is what I do. I want to rep this sport. It's the fastest growing sport in the world, but I want more of my hometown people to get involved.”

Although Thompson is a famous name in many martial arts circles, most fight fans got their first taste of “Wonderboy” at UFC 143 when he took on the then 7-1 Stittgen. “At first, I felt really nervous about it because there's a lot of hype and everybody has wanted to see me fight and they're expecting big things for me,” admits Thompson, noting that even a seasoned veteran of combat sports like himself experienced some UFC “jitters.” But a few words of encouragement from his father steadied him. “Right before I went out there, my Dad looked at me and said, ‘Just go out there and do your thing, don't worry about anyone else, and just do what you do.’ I took that to heart. I didn't go out there to look for a knockout - I just let it happen.”

With all the pressure of being known as a knockout artist (40 KOs in kickboxing), Thompson still delivered a textbook headkick finish in the opening round, as most hoped. “When I throw my hands, I like to finish up with a kick, and when I throw my kicks I like to finish up with my hands and one of those are going to land,” says Thompson, who displayed his technical, methodical, and ultimately fight ending striking power in that one round. “When I threw it, I figured it was going to hit, but I didn't know it was going to do what it did. I've hit people with that combination many times before - it's just a jab, cross, roundhouse - and with that kick coming right behind that right hand a lot of people don't see it and those are the ones that hurt you - the ones you don't see.”

Up next for Thompson is a stern test if there ever was one at UFC 145 against The Ultimate Fighter 7 alum Matt “The Immortal” Brown. A seasoned standup fighter with 10 UFC fights under his belt, Brown last fought on the same card as Thompson at UFC 143, scoring an equally impressive second round TKO of TUF 13 alum Chris Cope. The Ohio native is known for his in cage intensity, which is highlighted by his powerful Muay Thai style that includes a dangerous clinch game featuring a bevy of knees and elbows. In the UFC, climbing up any weight class’ ladder means battling the rough and tumble head on, and Brown is the prime example of that.

“Matt Brown's tough and he gets on you,” affirms Thompson. “he’s a veteran of the game and he is ready to throw. To be honest, I am excited to fight him. I'm glad that it has happened so quickly and I haven't had any time to rest. That last fight wasn't one of those brawls where you need weeks off. I was back to training in two days, and they said, ‘do you want to fight Matt Brown?’ I was like, ‘okay, let's do it.’ I like the way he strikes. He's a Muay Thai guy, he likes to throw knees and I've heard he's very good on the ground. I think it's good. He's a step-up for me. I'm training hard for him.”

In preparation for Brown and a future as a UFC welterweight, Thompson’s training always starts where it all began in Simpsonville with his Kempo. As an Americanized martial art, Kempo does incorporate aspects of wrestling and jiu-jitsu besides striking, which obviously became Thompson’s focus during his dominance in kickboxing. To further train his ground game, he works in Dallas, Texas with 9th degree BJJ red and black belt Carlos Machado, who just happens to be his brother-in-law. If that wasn’t enough, he also trains with stars like Nate Marquardt and Rashad Evans. Like all fighters, Thompson’s greatest weapon is what he’s most comfortable with, and that’s his karate.

“From my Kempo karate, I mostly use my movement, my quickness covering distance, and things like that,” reveals Thompson. “With my stance, I'm standing a little more sidewise than most other fighters out there. It helps me use my front leg and helps me change angles better than if I was standing square. The strikes that I'm doing are basic things that boxers are doing and other guys are doing. But I'm applying better movement than those guys. I never go out expecting a knockout. I'm just going out there to do what I do. If he wants to go out there and strike I'll be ready for him. If he wants to try and take me down, I'm working on my wrestling defense and working my way back to my feet. But all around I'm ready for whatever. I know that he's going to bring it. I know he's going to be super tough.”

For Thompson, the hype train only accelerated when scored a bonus check in his debut, and a win over Brown will show it wasn’t a fluke. “It was a good shot, but some people are thinking it was a lucky shot,” says Thompson, who is looking to stand and trade with the hard-nosed Brown, who has never lost an MMA bout via KO/TKO. “My first fight was only four minutes and people still are thinking ‘what does this kid have?’ This next one, I'm fighting Matt Brown and he's a really good name in the UFC and he's had a lot of wars with some really good people, so it's a step-up for me. I feel really confident and I think it's a very good fight for me.”

On April 21st, the technical Thompson collides with the brawling Brown in a welterweight striker’s duel. “We're bringing karate back,” states Thompson, who will definitely provide a renewed interest in the martial art with each and every win inside the Octagon. “In the early UFC's, people kind of bashed the karate thing. There are some good things you can learn from karate. I'm hoping to show everybody that in the UFC.”