In His First Fight Of 2022, Stephen Thompson Hopes To Entertain And Excite Fans In His Main Event Bout At UFC Fight Night: Thompson vs Holland
By Zac Pacleb, on Twitter @ZacPacleb • Dec. 1, 2022

Despite being about two months shy of 40 years old, Stephen Thompson feels like he’s 25.

Sometimes, an athlete might have some delusions of grandeur when it comes to their ability to deal with the almighty Father Time, but as he approaches his 24th professional mixed martial arts bout at UFC Fight Night: Thompson vs Holland, “Wonderboy” appears his usual enthusiastic and sharp self. Although he might have not imagined he’d fight into his 40s, a combination of smarter training and his competitive fire still very much burning has him in a healthy spot as he looks toward another main event slot.

“This is where I feel at home, competing,” Thompson told UFC.com. “Not only is that fun, it brings the nerves, as well. It gives you emotions that you’re not used to feeling, which can be addicting, for sure. It’s more on trying to better myself. That’s what I think it’s all about at this point, trying to be the best Stephen ‘Wonderboy’ Thompson that I can be.”

December 3’s headlining date with Kevin Holland is Thompson’s first bout of 2022. After a disappointing 2021 in which he dropped decisions to Belal Muhammad and Gilbert Burns, Thompson took some time to take stock of his position in the loaded welterweight division. He also expressed frustration with the way those fights went. In both fights, Muhammad and Burns both implemented grappling-heavy attacks that were low on action and high on the amount of time Thompson spent on his back. 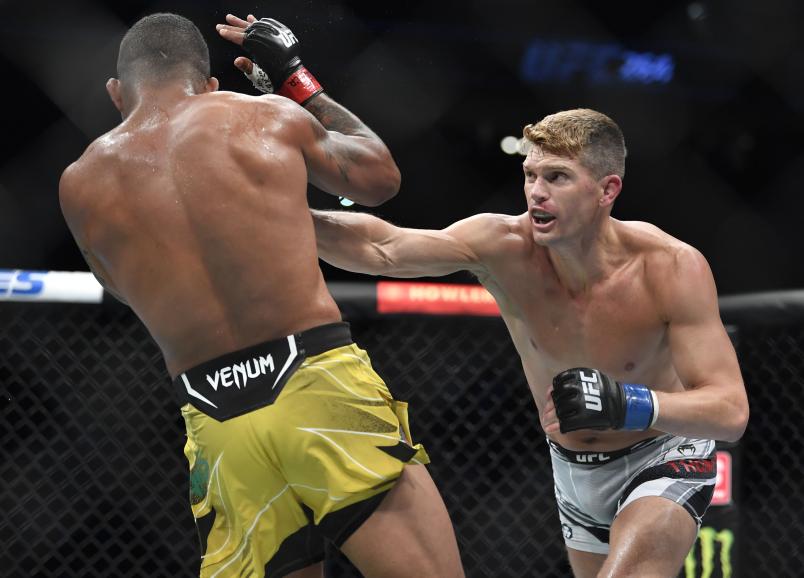 Stephen Thompson punches Gilbert Burns of Brazil in their welterweight fight during the UFC 264 event at T-Mobile Arena on July 10, 2021 in Las Vegas, Nevada. (Photo by Chris Unger/Zuffa LLC)

While Thompson enters the Octagon always hoping to get his hand raised, he also hopes to put on a show for the fans, which his karate-based style often does. When his last two fights drew some audible ire from fans, the losses stung even more.

Against Kevin Holland, however, Thompson expects a fan-friendly affair, which is all the more motivating.

“This one, when I wake up in the morning, it definitely puts a smile on my face because I know the fans are going to be excited about it,” Thompson said. “That’s what it’s about. Being the best that I can be and putting on a show for the fans.”

Holland, who spent most of his eventful UFC career at middleweight, recently made the committed move down to welterweight and reeled off a pair of second-round finishes before losing a catchweight bout to Khamzat Chimaev on the last-second shuffle that was UFC 279.

In spite of the last result, Thompson is impressed with the 30-year-old, whose kung fu background intrigues him as well.

“Kevin Holland did very well at 185,” Thompson said. “I know he’s not ranked at 170, but it won’t be long where he’s going to be ranked. He has beat some of the best guys out there. He’s doing work at 170. Just lost to Khamzat, but I don’t take anything away from him. The guy is really, really good, and he’s exciting. That’s what I like about him. He’s an exciting fighter, and that’s why I’m here: to make exciting fights for UFC and the fans and myself, to better myself.

“He’s unorthodox,” Thompson continued. “He works both sides. He’s very long. He’s got an 81-inch reach, which is going to be fun to navigate out there. What I mean by ‘fun’ is difficult, but that’s what makes it fun for me is the chess match. You never know what he’s going to say out there. He likes talking to his opponents. We may have a few interesting conversations in the Octagon, but other than that, it’s the excitement that I’m looking forward to. I’m always trying to test my striking abilities against other strikers, and he is that guy.”

Although the fight isn’t one that’ll launch Thompson right back into title contention, it is the kind of fight on an under-the-radar, fun fight card that points him in the right direction, especially after Leon Edwards’ world-flipping knockout win over Kamaru Usman to earn the title. 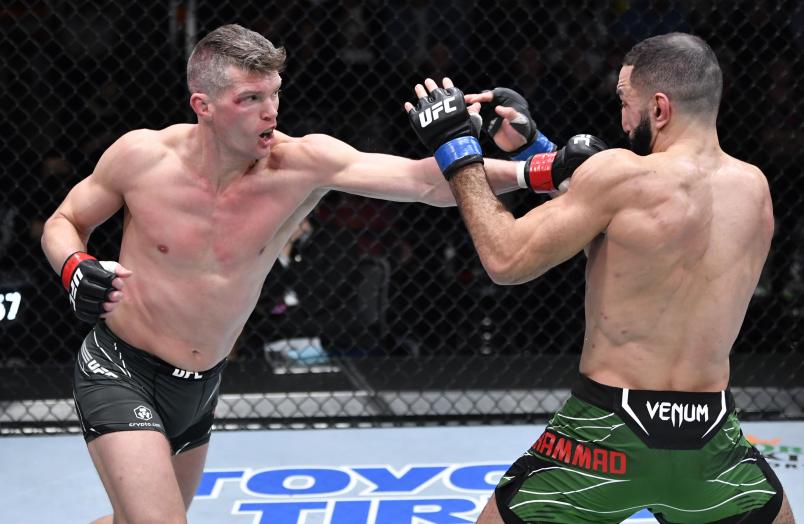 In a division that features marauding wrestlers and grappling aces like Usman, Burns, Muhammad, Sean Brady, Khamzat Chimaev, and Colby Covington, among others, Edwards earning the belt helps Thompson see a world in which a guy who would rather stand and strike can also rule the world at 170 pounds.

“It’s good to see a fellow striker be a champion,” he said. “That said, it gives inspiration to me because not only do I need to be a striker, but I gotta be a good grappler as well, and (Edwards) showed that in his last fight. Watching Leon Edwards be the champ gives me inspiration that I can do it, as well.”

First, though, comes getting a positive result against Holland. Thompson feels like he never put his best foot forward in 2021, so he is itching to give it a good go on December 3 in the last fight of his 30s.

“Knowing that I went out there and gave it 100 percent, I can be happy about that,” he said. “Win or lose, I can be happy. But, when I visualize this fight, I visualize my hand being raised at the end of it. That’s what I focus on. I focus on a five-round war with Kevin Holland, and that’s what I’m prepared for, but I always envision my hand being raised.”