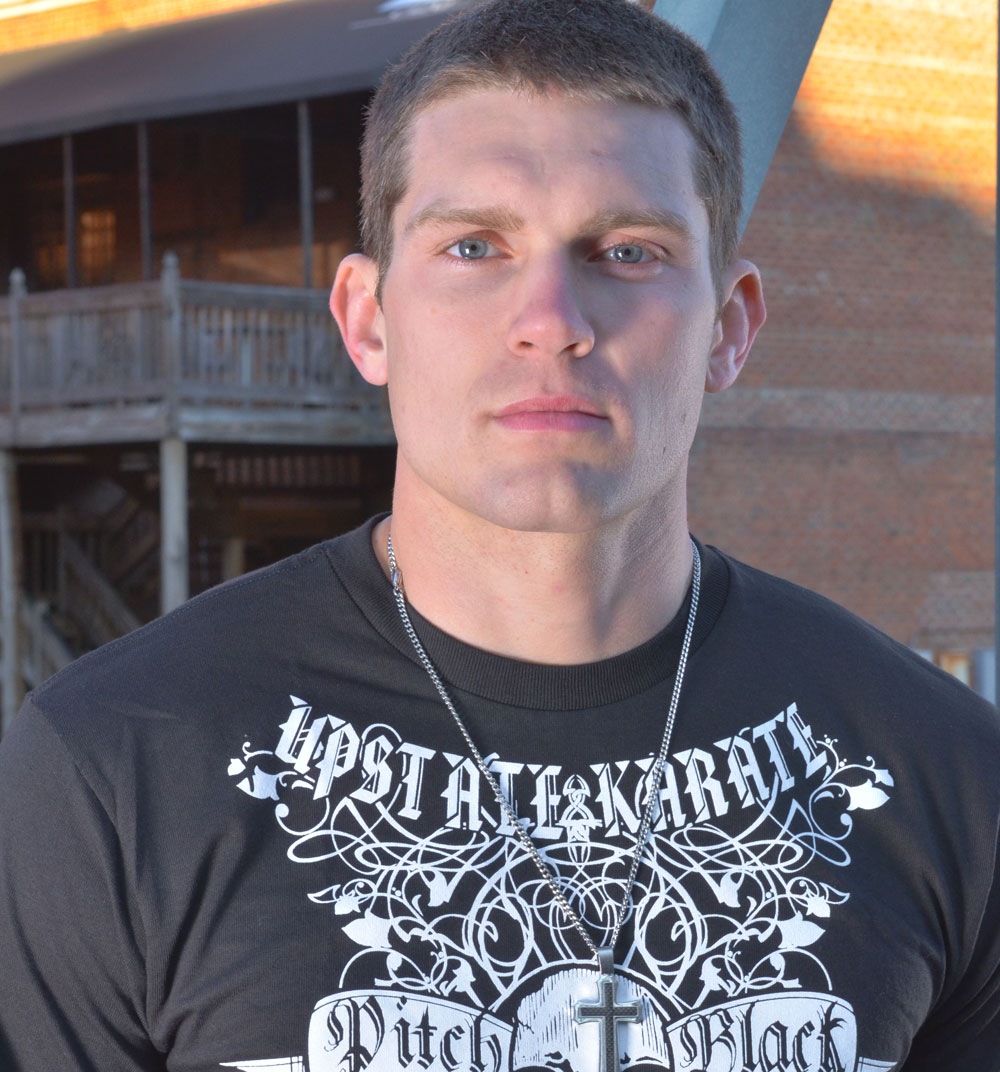 As a student of the martial arts since he was three years old, it’s safe to say that Stephen Thompson and his four siblings were born to throw punches and kicks under the tutelage of their father Ray. Not that it was a choice for the Thompson kids.

In fact, in what may be the oddest analogy ever, like the Amish, you did what you were told and followed the rules of the road until you reached a certain age where you would decide whether to continue with life the way it was, or break free.

Stephen rebelled a little early, around the age of 10.

“Growing up, there was a point there when I hated karate just because I had to do it,” he said. “Living in a family of martial artists, it was something that was required until we got to a certain age. And until I saw the benefits that martial arts have given me and other people, I really started to love it. One day it was like a light bulb clicked in my head and I understood what I was doing and what my dad was doing for us.”

So when his “Rumspringa” day, so to speak, came, he wasn’t about to walk away. He was going to be a lifer, as were his two brothers and two sisters.

It didn’t hurt that he was one of the best in the world at the craft chosen for him. When everything was tallied up, Simpsonville, South Carolina’s Thompson was a combined (pro and amateur) 56-0 with 39 KOs as a kickboxer, a staggering record that put him in rarefied air in that neighborhood of combat sports.

But being the best wasn’t enough, and so Thompson decided that he wanted to take a stab at another combat sport, mixed martial arts. It was a risky move, but “Wonderboy” believes that to be considered the best fighter in the world, you need to excel at all areas of fighting.

“I just wanted to do something new, something different,” he said. “My goal was to be the best fighter. And kickboxing wasn’t as popular, and in order to be the best fighter, I was gonna have to switch to MMA. I’ve been doing this my whole life, since I was three, and it’s my life – it’s a lifestyle. I eat, sleep and breathe it, and I love it.”

Turning pro in 2010, Thompson quickly compiled a 5-0 record on the local circuit, and after Mike Stumpf fell injured and was forced from this Saturday’s UFC 143 card against Justin Edwards, the 28-year old got the call to step in. Edwards would later be pulled as well due to injury, with Thompson now facing Dan Stittgen in Las Vegas. If it sounds like a whirlwind, it has been, but with years of competition behind him, adjusting shouldn’t be a problem for Thompson. What may be odd is being considered the rookie after years of being the toughest kid on the playground. But the grounded former kickboxer is embracing that part of this new journey.

What will also be a challenge is dealing with the nuts and bolts difficulties of having a reputation like his. When you’re a guy who never lost a kickboxing match, odds are pretty strong that opponents’ first thought will be to shoot for the ankles as soon as the bell rings. It’s a fact of MMA life Thompson has accepted.

“It’s probably going to be like that until we get up to the higher level,” he said. “Even now, everyone I fought in MMA tried to take me down. And if I do get a guy that’s gonna strike with me, that’s a plus, but I know that just about every guy I’m gonna fight is gonna want to take me down. I’ve already got that set in my head, and we’ve been working on my wrestling and jiu-jitsu every day.”

To that end, he’s got some pretty good help from his brother-in-law, who just happens to be the renowned jiu-jitsu practitioner Carlos Machado. And Thompson is more than used to getting a dose of tough love on the mat from Machado and some of his top students.

“I’m used to my brother-in-law and some of his upper belts just schooling me on the ground,” he said. “But that’s the way you learn, and that’s what I did when I first started striking.”

And even though he’s dialed back his striking in order to work his ground game and takedown defense, it’s a necessary process for him if he wants to avoid being dumped to the mat by his opponents.

“I’m not doing my striking as much, though I fill in just to make sure everything stays sharp,” he said. “I’ve been doing wrestling and jiu-jitsu for years, but just mainly focusing on that because I know those guys want to get me on the ground. This is a big stage for me. The UFC is top-notch, and the guys that I’m fighting are gonna be on their game everywhere. So I’ve just got to make sure that my wrestling and my jiu-jitsu’s there, so I’m definitely working on that more than my striking. And actually, I like my wrestling better than my jiu-jitsu. Obviously I want to keep it on my feet, I want to keep it standing, and I’m working on my jiu-jitsu every day too, but I love my wrestling because that’s what keeps me able to keep it standing. These guys are shooting for my legs, and my wrestling defense is what’s gonna keep me on my feet so I can knock these guys out.”

That’s really what everyone wants to see from Thompson, and should he find a welterweight willing to stand with him, it will certainly produce fireworks. But if not, that’s okay, because this isn’t a lark for him; it’s been his life, and in a way, it’s all been for this – to perform on the biggest stage in combat sports and show what his father Ray taught him.

“I’ve been doing this since I was three years old, and I would say that everything that I’ve done in the past has been leading me up to this,” he said. “My dad knew what he was doing when he was younger and had me starting my full contact training when I was 12. Even though my striking was what I was focusing on at an earlier age, I still was doing my wrestling, and I still was doing my jiu-jitsu, because that’s what Kempo is all about.”