“In the beginning it was a little bit strange without the crowd, but now I feel very comfortable here.”

Stephanie Egger is looking around the UFC APEX where she’ll make her third consecutive appearance Saturday to open the prelims of UFC Fight Night: Santos vs Hill.

“The good thing is you hear your corner,” she explains. “So that's very good for me.”

Perhaps it was the ability to hear her coaches. Perhaps the intimate setting allowed more concentration. Whatever it is, something is working for the bantamweight in the Las Vegas venue. Her two previous performances here have been dominant; a first-round armbar submission over Jessica-Rose Clark that won Performance of the Night honors last February, and a second-round TKO of Shanna Young in late 2021. Something is clicking and the Switzerland native has kept her foot on the gas to ensure it continues.

“Yeah, I started training directly after my win against Clark. I started immediately with training, and I did a very hard camp for this fight. I'm very excited, and I hope I can continue with my winning streak.”

In addition to the streak, she’s aiming for a busy fight schedule to continue collecting experience. Despite compiling a 7-2 pro record, she still feels green in the sport of MMA.

“I haven't that much experience and, for me, it's very important to do a lot of cage experience, so I want to fight as much as possible.”

That’s not to say she’s new to high-level competition. The judo black belt was the Swiss Judo champion from 2011-2013 and won the European U23 Championships in 2010. When she eventually transitioned to MMA, she considered reinventing herself in a wrestling style until she was convinced to lean into her strengths. 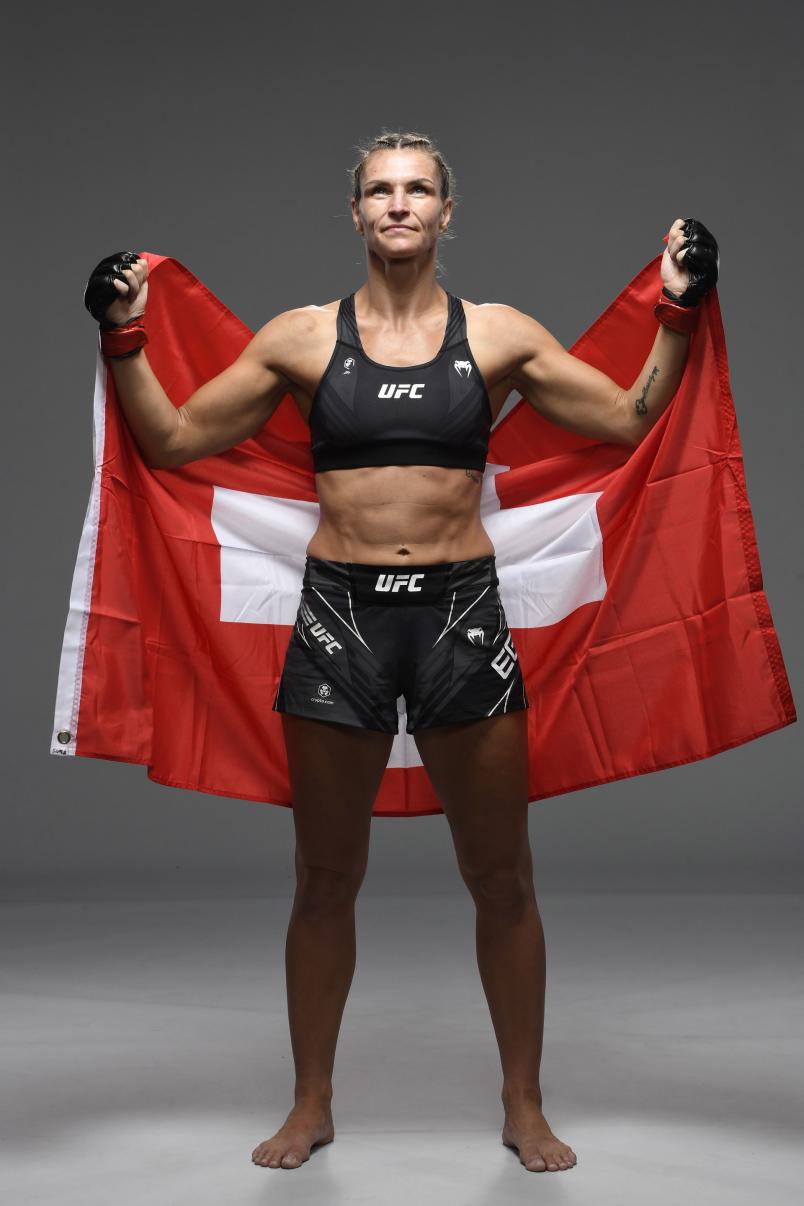 Stephanie Egger of Switzerland poses for a portrait backstage during the UFC Fight Night event at UFC APEX on October 02, 2021 in Las Vegas, Nevada. (Photo by Mike Roach/Zuffa LLC)

“When we worked with a new coach, he said, ‘You have to bring your judo skills more in your game.’ In the beginning, I tried to be a wrestler, but then saw that my judo is stronger and it's harder to defend for the other girls.”

That certainly seems to have been the case. Her two losses were a razor-close split decision to Alexa Conners in Invicta back in 2016, and a short-notice UFC debut against Tracy Cortez on Fight Island, where she still showed tremendous durability in the decision loss. She regards the experiences as invaluable to moving forward.

“We try to work on everything but, for sure, I worked hard on my striking game because that's my goal: to get better there, too. But I also worked on my strength, throws and the ground game.”

The test this Saturday is Mayra Bueno Silva. The Brazilian is on a two-fight win streak herself and has shown similar flashes of brilliance in her UFC run.

“In the beginning, I didn't know her, but then when I got the contract, I watched some film, some fights,” Egger says, noting that her coaches did a deep analysis of the contrasting styles. “I think it's very competitive. She's very a tough girl, very aggressive. So I think it's a very good matchup.”