Stephan Bonnar - The Uglier, The Better

"My coaches know that the uglier the fight gets, the more I get hit, the more I rise to the occasion and the better I fight." - Stephan Bonnar 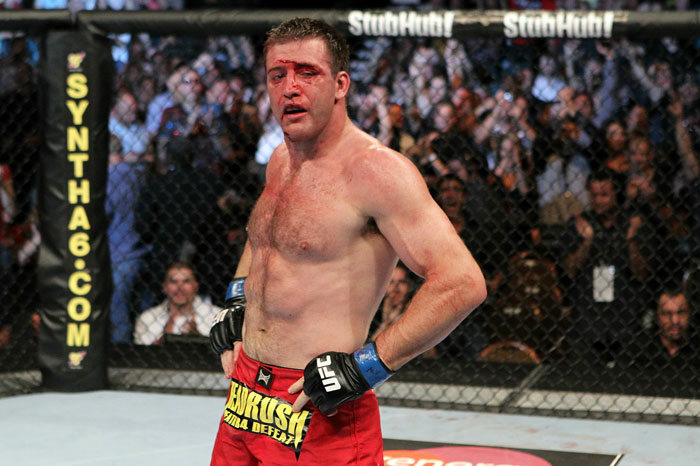 Every UFC fighter, without exception, is asked to name his favorite technique. Only one of the 303 pro athletes on matchmaker Joe Silva’s roster answered “the punch to the face.”

That would be Mr. Stephan Bonnar. And the Indiana native’s response, intended in earnest, is entirely fitting. If any fighter epitomizes the take-one-to-give-one mentality, it is this Purdue University graduate, immortalized for what UFC president Dana White called a “lightning in a bottle” performance against Forrest Griffin in April 2005 that seared an unforgettable and indelible first impression on hundreds of thousands of people seeing the UFC for the first time.

Renowned for his toe-to-toe tendencies, Stephan Bonnar and his iron chin are 34 years old now. His body has endured the rigors of a 10-year pro career, with additional mileage on his body courtesy of Golden Gloves amateur boxing competitions. Has he ever considered switching to a less rugged style, something more cerebral and cautious that might expose him to less carnage and prolong his career? Dare he sprinkle a little more stick-and-move boxing and a lot less brawling into his game?

“No, not really,” Bonnar replied, noting that his coaches, Sergio Penha and Nick “OneKick” Blomgren have not encouraged him to become more methodical, either. “My coaches know that the uglier the fight gets, the more I get hit, the more I rise to the occasion and the better I fight. Sometimes that is what it takes to get it out of me. When I fought Rashad (Evans) he kept taking me down and playing jiu-jitsu on top. After the fight I just wished he would have started smashing me in the face a couple of times to light a fire under my a--. Then maybe I would have got (emotionally) up and made it a fight instead of playing jiu-jitsu. So sometimes I need to get into a really ugly fight to dig deep and draw the best out of myself. I hate to say it, but it’s the truth.”

Bonnar’s discovery that brawling is part of his DNA predates his MMA career. It was revealed to him while competing in the Chicago Golden Gloves, a prestigious amateur boxing tournament which he won twice. The achievement qualified him to compete in the Golden Gloves national tournament in 2004.

“I went to that tournament and most of those guys probably had between 60 and 100 fights,” he said. “I only had maybe a dozen boxing fights so I knew that I wasn’t going to beat those guys if I just go in there and make it a boxing game and try to outpoint them. I gotta make it ugly and beat them that way. Technique-wise these guys are better and more experienced than me, and faster and stronger, too. I was kind of small and I was fighting at super heavyweight so I just took ‘em to the well. I took ‘em to the well.”

In his first fight at nationals, Bonnar recalled, he was pitted against a fifth-ranked stud from New York.

“So I didn’t stand a chance,” Bonnar said. “He beat the s--- out of me in that first round. He hit me with some good ones and tried to take me out of there. I remember walking back to my corner at the end of the first round and joking, ‘Do you think I got that round, coach?’

His coach wasn’t concerned, telling Bonnar, “You got a good jab, just trust your jab! Believe in yourself. You should be here!”

As the second round commenced, Bonnar was emboldened, particularly because he sensed his opponent might be tiring.

By the way, those three round wars happened on back-to-back days. How many tough guys could do that against elite competition – knock out two heavy favorites that beat on you for two rounds? Yet that has been the magical modus operandi for Bonnar, who has always countered “bigger, faster, stronger” foes with “braver, grittier, tougher.”

It is a style that bears some resemblance to that of Kyle Kingsbury (11-2, 1 No Contest), the former Arizona State University football player who happens to be Bonnar’s opponent this Saturday on the UFC 139 main card in San Jose, Calif. Kingsbury, winner of four straight in the UFC, is coming off a Fight of the Night slugfest victory over Fabio Maldonado.

The matchup between 6-feet-4-inch 205-pounders has three rounds of mutual carnage written all over it.

“Yes, I will be chasing a bonus; I’m going for Fight of the Night. I’m not going to fight a smart fight – I’m going to try to put people on the edge of their seats,” said Bonnar, a Brazilian jiu-jitsu black belt who has never been knocked out or submitted (his only two losses have been stoppages due to cuts). “I mean, if I can catch him in a submission then I’ll take that. But if I lose the fight, and get Fight of the Night, I’ll make more than if I just win the fight boringly so (laughs) … that’s part of my gameplan.”

Winner of two straight (over Igor Pokrajac and Krzysztof Soszynski), Bonnar hasn’t fought in over 11 months due to tearing a medial collateral ligament in his knee months back. He also devoted time to a side business venture, which involves him and a childhood friend, Tom Scully, creating high-end artwork and T-shirts.

“MMA T-shirts are just too dark, it’s all just demons and skulls and horns and wings. That’s not what MMA is to me,” Bonnar said, explaining how he detected a niche in the market that was not being served. “A lot of us are just normal guys with good senses of humor. So we wanted to do something funny so we started making “Punch Buddy” shirts for a lot of fighters. We have GSP, me, Brock, Forrest, Rich Franklin, Melvin Guillard, Miguel (Torres), Matt Mitrione. We just did Donald “Cowboy” Cerrone. We just finished a sketch of Frank Mir and we’re going to do a (Bruce) Buffer, too. So it’s the lighter side, funny cartoon versions of the fighters. In addition to that we’ve been doing event t-shirts.

“It’s something I really enjoy. It brings me joy to create something and see it come to life. To be honest with you, if your life is just fighting, and you’re inside a gym twice a day, it gets depressing. That (business) sparked some life into me. It’s fun.”

Among Bonnar and Scully’s creations (with the help of skilled cartoon sketch artists), in Bonnar’s words:

•    “Brocked and Loaded: Let’s have a big Paul Bunyon looking Brock with a plaid shirt on firing a shotgun in the air and dragging Babe the blue ox around.

•    Georges St-Pierre “Well he’s not a trash talker. He’s a gentleman, Gentleman George. Let’s have him in his gi, wearing a bandana and a little halo and a birdie flying over his head, pushing a beaten up opponent into the hospital in a wheelchair.”

•    Frank Mir, with wife Jenny’s input: “Everyone makes fun of his hair and thinks he gets perms because of his curly hair. So why not do something with Frank with a bunch of curlers in his hair like Big Perm from Friday in an ice cream truck?”

There are no plans to design a Kyle Kingsbury t-shirt, only plans to beat him on Saturday.

“I just want to go out there and beat Kyle Kingsbury. I’m as strong as I’ve ever been, in the best shape I’ve ever been, and ready to push the pace,” Bonnar said. “I just have to do what I always do. Just bring it.”