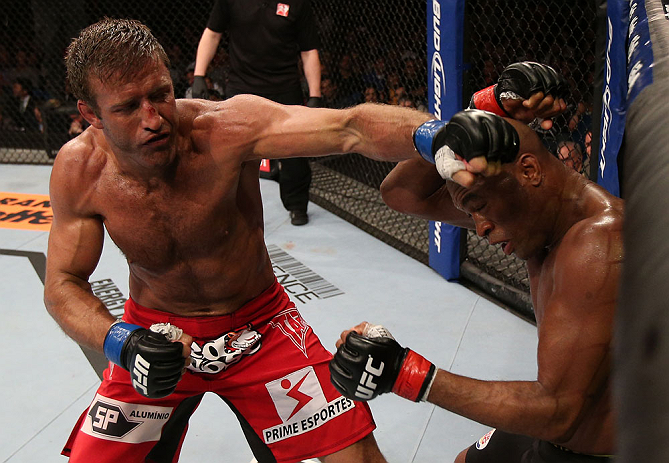 Stephan Bonnar made it official Tuesday, announcing his retirement from the sport of mixed martial arts at the age of 35.

“Huge thanks to every UFC fan out there,” wrote Bonnar on his Facebook page. “All I ever wanted was to bring ya'll some fun...hope u were entertained.”

Leaving the sport with a mark of 17-8, which includes a final defeat at the hands of Anderson Silva on October 13, Bonnar’s career will never be summed up as a collection of wins and losses, but more for what he brought to the Octagon night in and night out.

As I wrote after the Silva fight, the first memory of Stephan Bonnar that will come to mind for me will always be the end sequence of his 2010 win over Krzysztof Soszynski.

On a UFC 116 card filled with some of the best fights of that year, battles between Brock Lesnar and Shane Carwin, Chris Leben and Yoshihiro Akiyama, and Ricardo Romero and Seth Petruzelli, Bonnar and Soszynski scrapped for eight minutes and eight seconds, with Bonnar emerging victorious in the second round of their rematch via technical knockout.

As soon as it was over, a bloodied Bonnar walked to the middle of the Octagon, hands on hips, and stared at the camera defiantly. It was iconic, and it showed the world what it meant to be a fighter. Of course the self-effacing Indiana native didn’t put that much weight behind what was a spur of the moment decision.

“I thought it would look pretty cool,” he told me earlier this year. “I was kinda making a statement like ‘yeah, you can hit me all you want, but I’m not going anywhere.’”

If you’re going to put an epitaph on the 11 year career of Bonnar, that might as well be it, and he would probably be okay with that.

In his last bout, Bonnar stepped up on short notice to face pound-for-pound king Silva in the main event of UFC 153. The fight ended a nearly yearlong semi-retirement in which he told himself that he would only come back for a big fight.

This one was big, a chance to throw hands with the greatest fighter of this era and possibly of all-time. For a 35-year-old who never had the opportunity to challenge for UFC gold, this was his world title shot. Yet like all those who challenged Silva before in the Octagon, he came up short, getting stopped late in the first round, the first time he suffered that fate in 25 professional fights without it being due to cuts.

Despite the defeat, Bonnar showed up and did what he said he would do. He came to fight, and when you show up and throw caution to the wind, sometimes the result isn’t what you would like it to be. But at least you can hold your head up when it’s over, knowing that it’s not always about winning or losing, but about the fight.

Let’s face it, not everyone can be Anderson Silva. In fact, only one person has pulled that off, even with the pound-for-pound king’s insistence that his greatest fight would be against his clone. But all futuristic experiments aside, you would think by listening to some fans and pundits that it’s easy to be an Anderson Silva, a Georges St-Pierre, a Jon Jones, or a Jose Aldo, and that every fighter shouldn’t just aspire to be one of these elite level mixed martial artists, but that they should be them, with anything less than that a colossal failure.

But that’s not reality. And even though this is the end of the line for Bonnar as a professional mixed martial artist, he walks away as a real fighter, someone who didn’t just compete against the best, but who fought the best.

Lyoto Machida, Forrest Griffin, Rashad Evans, Jon Jones, Mark Coleman, Silva. There’s one Hall of Famer and six world champions in that group, with a couple likely to join Coleman in the UFC Hall of Fame one day. The results really don’t matter when you’re mixing in with company like that. In fact, if you’re looking for a parallel in another sport when talking about Bonnar, the name Jerry Quarry immediately comes to mind. Quarry was one of the best boxers of the Golden Age of heavyweights in the 1970s. But when you’re surrounded by Muhammad Ali, Joe Frazier, and George Foreman, it’s hard to make it to the top of the mountain. So to denigrate Bonnar for his defeats takes away what he did accomplish in the sport, the most important possibly being his first fight with Griffin in 2005, an epic three round battle that showed the rest of the world what the diehards knew about mixed martial arts. And it was something Bonnar knew was going to happen before the show that launched the sport, The Ultimate Fighter, even aired.

“I remember (UFC President) Dana White being worried that the show wasn’t even gonna make it to TV, and I could tell he was worried that it wouldn’t be a success,” Bonnar said in 2009. “For some reason, in my mind, I was like ‘what, are you kidding me? This thing’s gonna be a hit and we’re gonna have a bunch of seasons like this.’ I always thought it was gonna be the coolest show ever.”

Griffin-Bonnar I was certainly one of the coolest fights ever, as the two friendly rivals punched and kicked each other non-stop for three rounds, fighting as if more than a UFC contract was on the line. Griffin would emerge victorious that night, but both light heavyweights left the Cox Pavilion in Nevada with jobs, and it was just the next step for the almost accidental prizefighter dubbed “The American Psycho.”

“I did it kind of a hobby,” said Bonnar in 2006 when asked about his fighting origins.  “I always loved fighting and I did wrestling and tae kwon do growing up and got into jiu-jitsu and boxing.  And I really just wanted to get better, so what’s the best way to get better?  Enter a competition and see where you’re at.  Then you enter another one; then with boxing it’s like, let me enter the Golden Gloves and see how good I am.  It just keeps escalating.  Each time you win or each tournament you do, you get a little better.  And then with the mixed martial arts, why not try it?  I won some fights and got some bigger fights, and it pretty much just snowballed.  And it wasn’t something that I really planned on doing – it was something I always wanted to and I’m really thankful to find myself here.”

Bonnar always fought as if he was just seeing how far he could take things, with each passing bout another reason to keep going. Then it snowballed and he became a fixture in the sport’s glamour division at 205 pounds. But he was no mere brawler, as the former Golden Gloves boxer also held a jiu-jitsu black belt under the late, great Carlson Gracie, and when necessary, as in wins over James Irvin and Kyle Kingsbury, he could and would take matters to the ground in order to give himself the best shot at victory.

The standup wars made his reputation though, most notably against Griffin (twice) and Soszynski (twice). They also took a toll on his body, as he dealt with everything from a busted up elbow and a broken hand to reconstructive knee surgery. By the time he stood in the middle of the Octagon after defeating Soszynski, there was a lot of mileage on him, even though he would score two more wins over Igor Pokrajac and Kingsbury before the loss to Silva.

That’s the way real fighters go out though. There are no tidy endings, no three round waltzes where you barely break a sweat before getting your hand raised at the end. For a fighter like Bonnar, if you can’t go out on top, you go out the way you came in – swinging for the fences. Sure, he got caught by a knee from the best fighter in the world while doing it, but Bonnar was always fond of the gunslingers. Just look at the tape of his UFC 77 fight with Eric Schafer, when he held out his gloved arm toward “Red” during the pre-fight introductions in the style of one of his heroes and one of the great gunslingers of combat sports, Aaron Pryor, before going out and winning the fight by TKO in Pryor’s hometown of Cincinnati in the second round.

It was a fitting tribute to Pryor, and while I don’t know if “The Hawk” is an MMA fan, if he is, he’s probably a Stephan Bonnar fan. And you should be too. He put together a career well-fought, and in answer to his hope that we were all entertained, yes Stephan, we were. Thank you for that.