Remembering The UFC Hall of Famer And The Ultimate Fighter Season 1 Contender
By Thomas Gerbasi • Dec. 24, 2022

The UFC family is saddened by the tragic passing of UFC Hall of Famer Stephan Bonnar Thursday from presumed heart complications while at work.

"Stephan Bonnar was one of the most important fighters to ever compete in the Octagon," said UFC President Dana White. "His fight with Forrest Griffin changed the sport forever, and he will never be forgotten. The fans loved him, related to him and he always gave them his best. He will be missed."

A pioneering competitor who introduced himself to UFC fans on season one of The Ultimate Fighter in 2005, Bonnar teamed up with Forrest Griffin at the show's finale to produce one of the greatest fights of all-time, later earning it a place in the UFC Hall of Fame's fight wing.

"I knew it was a good fight during the fight,” Bonnar once said of the epic three-rounder. “It hit me when everyone started stomping their feet and it felt like the whole place was shaking. And that was in the second round. I was like ‘oooh, this must be good.’”

More than that, though, the first Griffin-Bonnar fight may have saved the UFC as it led to another season of TUF and introduced the sport to a new generation of fans.

"Everything changed,” Bonnar said. “I didn’t think I’d have a UFC career. It was just a little hobby I was doing, so it changed everything. Almost overnight, I became like a celebrity. Everywhere I went, someone would recognize me, even in obscure places. I was traveling with TapouT and we were in a small town. I was jogging and someone in a pickup was going ‘Hey Bonnar.’ And everywhere you go, someone knows who you are. It was wild.” 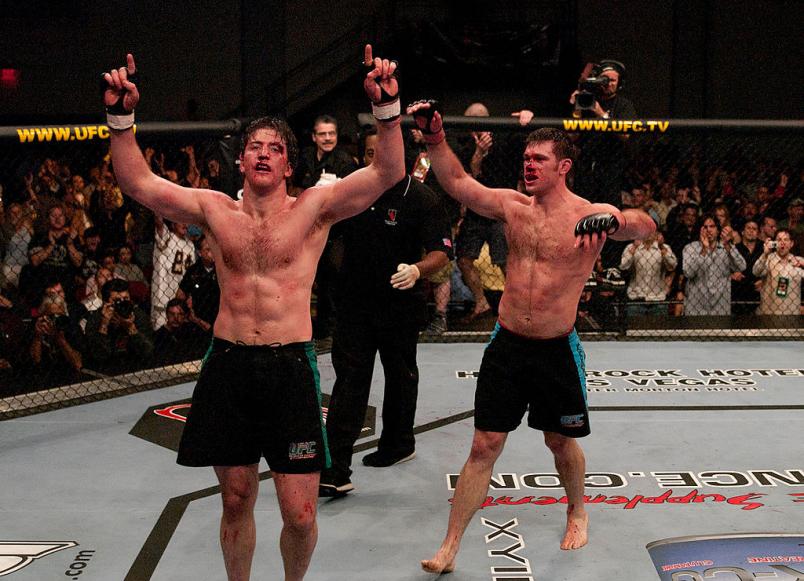 (L-R) Stephan Bonnar and Forrest Griffin react after their historic three-round battle during the Light Heavyweight Final bout during the live Ultimate Fighter Season Finale at the Cox Pavilion on April 9, 2005 in Las Vegas, Nevada. (Photo by Josh Hedges/Zuffa LLC)

But Bonnar's career highlights didn't end there, as the Indiana native thrilled fans for the next seven years, defeating the likes of James Irvin, Keith Jardine, Krzysztof Soszynski, Igor Pokrajac, and Kyle Kingsbury.

He also faced fellow Hall of Famers Griffin, Jon Jones, Rashad Evans, Mark Coleman, Anderson Silva and Tito Ortiz before ending his career with a 17-9 record, and win, lose or draw, the affable Bonnar could always be counted on to leave it all in the Octagon on fight night, never resting in his laurels as one of the most important figures in UFC history.

"It was kind of a little lesson," Bonnar said of his seminal fight with Griffin. "If you never quit, you really can’t fail. That was the perfect example of that. Give it everything you’ve got and something good will come out of it.”

The UFC family sends its sincerest condolences to the family and friends of Stephan Bonnar.