"Every single time I get a chance to finish a fight I’ll try and go for it." - Stefan Struve 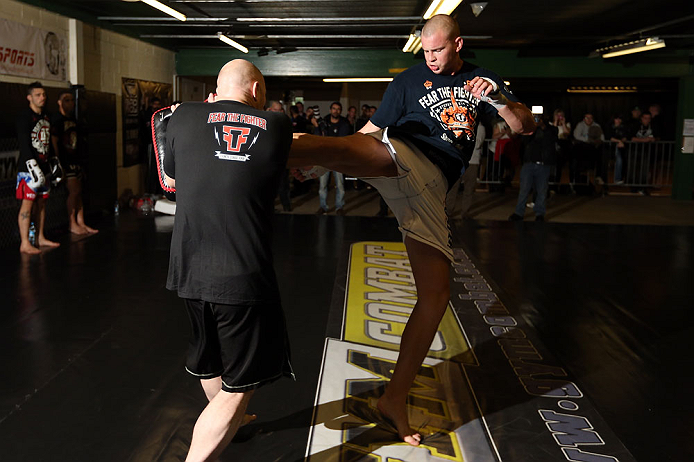 If you have been following the career of Stefan Struve, you undoubtedly watched his UFC 146 bout with Lavar Johnson in May with bated breath. Sure, Struve had won four of his previous bouts, but Johnson had the stone-fisted assault that could end any hot streak in a split second.

And while it’s not like Struve has a weak chin, all three of his UFC losses (to Junior dos Santos, Roy Nelson, and Travis Browne) came by knockout, and they all took place when the fists started flying and the 6-foot-11 ½ “Skyscraper” got in a phone booth and fought like he was a foot shorter.

So as Johnson stalked, the countdown began to see just how Struve would react.

It didn’t take long. Johnson got close, Struve tied him up, and then pulled guard. Seconds later, the fight was over, with Struve winning via armbar. It took all of 65 seconds, but in that 65 seconds, Stefan Struve became a contender.

“The last three fights I really tried to do what I need to do and I didn’t want to go get it too hard,” he explains. “For instance, the fight I had with Travis, I just wanted to go get it too bad, and right now I can say to myself, ‘take one step back, take your time, keep your distance, just pick him apart again. Stay calm and relax.’ And if I do it that way, I think I’m gonna keep on winning for a long time.”

Still just 24 years old, Struve already has a 28-5 record that includes an 8-3 slate in the UFC. He’s apparently still growing, as he gained a half-inch in height between the Herman and Johnson bouts, and when it comes to his fight game, he has come to the realization that you can fight smart and disciplined and still be exciting. Submission of the Night awards in two of his last three fights (Johnson and Pat Barry) and a second round TKO in the middle bout of that trio (against Dave Herman) attest to that.

“When it comes to discipline, I don’t make the mistakes anymore that I made in the past which cost me in the fights with Travis and Roy,” said Struve. “So I stay disciplined but still want to go in there and finish every single fight. That’s the way I go in there right now. Every single time I get a chance to finish a fight I’ll try and go for it.”

Not that it’s always easy to keep your cool when a 250-pounder is throwing bombs at your head. In the past, when that happened, Struve would plant his feet and fire right back. If he landed, it was a good thing. If he didn’t and he got countered or drilled with some high heat, now that was a bad thing. But after a few hard knocks, Struve gets it now.

“It is hard and it’s really something you need to learn, but it’s the smartest thing to do,” he said. “Sure, it’s entertaining for the crowd to see two guys go at it and exchange punches, but now and then it’s better just to move sideways or backwards, and take your time and be smart.”

That strategy has worked for him against talented and dangerous opposition, and he’ll be calling for it once again on Saturday when he headlines the UFC on FUEL TV event in Nottingham against unbeaten Stipe Miocic. The Netherlands’ Struve never got to build up a 9-0 slate like his opponent has, but he knows what that zero could mean to a fighter. Sometimes they fight even harder to keep it, but sometimes they don’t fight to win, they fight not to lose. And something Struve learned early on is that a loss doesn’t necessarily spell doom for your career. Miocic doesn’t know that yet, but Struve is certainly willing to show him by beating him this weekend.

“The times I’ve met him and from what I’ve seen from him, he’s confident and I’m sure that he goes in there with the same thoughts as me – that he’s going to go out and get his hand raised,” said Struve. “For me, when you’re undefeated, you want to keep that zero, but losing is not the end of the world. You have to embrace the fact that anything can happen and that you can lose, but all I care about is winning my fight and doing it in as good a way as possible.”

When discussing his opponent, it’s evident immediately that the Beverwijk product has done his homework on the Ohio native’s three UFC wins thus far, whether it’s Miocic’s hard-fought win over steel-chinned Joey Beltran, his knockout of Phil De Fries, or his second round finish of Shane Del Rosario. Struve’s conclusion? He’s going to win.

“His first fight was with Joey Beltran, and he won a decision, but Joey moved down to light heavyweight recently, so he wasn’t the biggest heavyweight out there,” said Struve. “Then he fought De Fries, and De Fries rocked him, but I think he got a little lucky with that punch and his standup is far from as good as Stipe’s, so Stipe did his thing. And with Del Rosario, he (Miocic) had a very tough first round, and though Del Rosario’s a good kickboxer, I think my kickboxing’s even better. I train with some of the best K-1 kickboxers every single week and I keep improving as you’ve seen in my last few fights. What got him the win was that he took him down, and it seems like Shane was tired and didn’t know what to do when it hit the ground. He didn’t use his hips and his open guard the way he should have, and in my opinion, if we go to the ground then he’s in a world of trouble. People haven’t seen 20 percent of what I can do on the ground. So I’m really confident for this fight, as I was for my last three fights too.”

He’s also allowed himself the luxury of adjusting a timetable that used to see him expecting a title shot in several years’ time. Now, he’s fully aware that a win over Miocic would be four straight, putting him smack dab in the championship hunt.

“Thinking of getting a title shot is good fuel for training,” said Struve. “Those are nice thoughts and getting that belt around your waist is a dream, and that’s what I do this for. And every single fight, I see it as a step to come closer to my goal of winning a world title in the UFC. But one fight at a time. Right now, I’ve got a problem I have to solve with Stipe, and that’s the only thing I care about. We’ll see what comes up after this fight and we’ll see what (UFC President) Dana (White) and (matchmaker) Joe Silva say. Again, there’s still no rush, but I’m thinking of it, and if I keep on winning, it’s gonna come.”