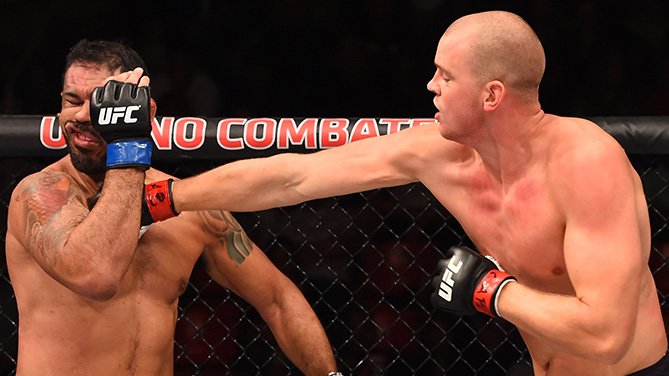 Finally, we can talk about the fighting career of Stefan Struve again. It seems like forever since the Netherlands native was discussed as a rising star or heavyweight contender without bringing up the 21 months he spent away from the Octagon due to a leaking bicuspid aortic valve in his heart.

Yes, medication got that situation under control, but then there was his missed fight with Matt Mitrione, when he passed out in the locker room before the bout, and his subsequent loss to Alistair Overeem. For one of the most likable people in the fight game, it seemed to be a cruel fate, but on the night of August 1, Struve defeated Antonio Rodrigo “Minotauro” Nogueira, and everything fell back into place. Health issues? Gone. Run for a heavyweight title? On.

“To me, the only reason those losses ever happened was because of the health issues,” said Struve, who dropped back-to-back bouts to Overeem and Mark Hunt before beating Nogueira at UFC 190. “Otherwise, I would have been on a much longer win streak right now. But I left that behind me, and I don’t even think about it anymore. I picked up my life here in south Florida, I had an amazing training camp with great training partners and great trainers, and life is good. I have a lot of fun with what I’m doing, and I really get everything I need right here, so it’s been amazing.”

Struve just finished his second training camp with the Blackzilians team as he prepares for a UFC 193 matchup with Jared Rosholt, and you can hear the excitement in his voice when he talks about his time in Florida. As he points out, it’s a move he’s wanted to make for a while, but between his health scare and the passing of his father in 2013, Struve needed to be home.

“I had a lot of issues the last couple years that kept me in Holland,” he said. “I was already looking for training in the States, but a lot of things kept me from going there. And now that I’ve finally made the move, it took a lot of people to bring me here, my manager (Lex McMahon) did an amazing job, and now that I made the move, I couldn’t be happier, not just in the gym, but in life as well. It’s great.”

So now it’s back to business, and since the UFC has never had a show in the Netherlands, the Beverwijk native has become quite the road warrior in pursuit of a heavyweight title. This week, it’s Melbourne, Australia, and another stamp on a pretty packed passport.

“I’m used to it and I like it,” Struve said of his travels. “It’s great to see a lot of the world. Not a lot of people get to do it and get paid to do it, so it’s awesome. Even before I got to the UFC, I already had a lot of fights, especially for my age, and the majority of those fights were in countries other than Holland because there wasn’t a lot of competition for me in Holland. So I saw a lot of Europe, I had some fights in the U.S., some fights in Canada and Russia and Asia. I love it. Australia was on the list of places I definitely wanted to fight in, and now with the stadium show, it’s an amazing opportunity for me to show that I’m still a true, top contender in the heavyweight division.”

Before the losses to Hunt and Overeem, Struve had won four straight, all by submission or knockout, but it took his win over Nogueira to land him back in the top 15, and while he made it look easy against the Brazilian icon, an illness suffered that day could have derailed everything.

“I had some issues with my stomach the night of the fight,” he said. “There were a lot of people with the same issues, so I don’t know what it was, but it wasn’t fun.”

It wasn’t about to stop the “Skyscraper” from making that walk and fighting, though.

“I didn’t care,” Struve said. “I didn’t care at all. I was so focused, I had such a good training camp, and I told myself before the fight, I don’t care about it. My warm-up went perfect and the first two rounds I was careful about using too much energy. But in the third round I wasn’t getting tired, so I pushed the pace and saw if I could get the finish.”

Struve didn’t finish a fighter known for his toughness, but that didn’t mean he didn’t try. And if the victory wasn’t impressive enough, consider that Nogueira was (and still is) an idol of the Dutchman, but he didn’t let that alter his game plan in the slightest.

“I hit him with everything I had that night,” Struve said. “I hit him with jabs, straight rights, crosses, kicks – you name it, I hit him with it, and he just didn’t want to go down. He kept going. He was still standing after three rounds, and I’ve got a lot of respect for him. I was just happy to get back on track and I was a little disappointed that I didn’t finish the fight, but looking back, he retired afterward and I’m happy that he got to go out the way he did. He put on a good performance, in my opinion, and that man is as tough as they come. I threw everything I had at him, and he took it all.”

Finishing Nogueira would have been a big notch on Struve’s belt, but he’s right, no one wanted to see “Minotauro” go out with a knockout or submission loss. If he was going to lose in his last fight, at least he went out on his feet. And while fans were emotional about Nogueira’s retirement, they also felt the same way about seeing Struve come back the way he did. Now all that matters are the fights, and Struve is determined to add to his win total against Rosholt.

“The winner of this is on a nice win streak, that’s for sure,” he said. “But the thing that’s in my head is that I’m gonna finish this guy and I’m gonna make it look impressive. Then everybody’s going to say ‘wow, he’s really back,’ if they don’t already think that. I just want to show that the hard work that I’ve put in here in south Florida, being away from my family and everybody in Holland, is really paying off. And if I fight my fight, he’s got absolutely no chance at all.”