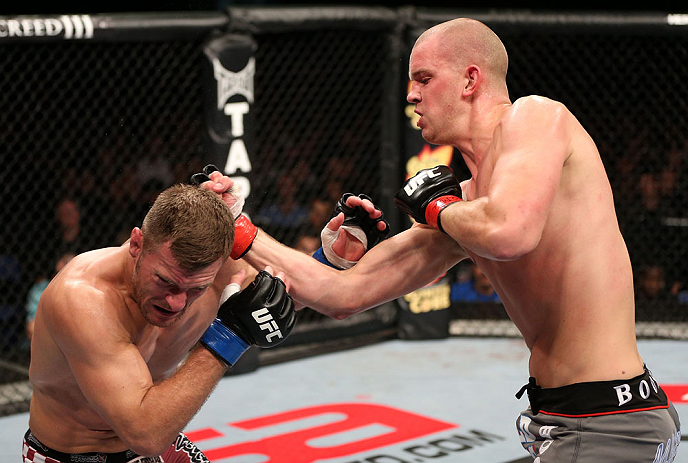 Four years ago, tucked away on the preliminary portion of UFC 95, a 21-year-old Dutch kickboxer made his UFC debut against a heavyweight named Junior dos Santos.

In his previous appearance, his first in the UFC, the Brazilian known as “Cigano” had introduced himself to the MMA world with a stunning first-round knockout victory over Fabricio Werdum. After starching a perennial contender in his debut effort, dos Santos became a dark horse contender himself - someone to keep tabs on as he made his way up the heavyweight ranks.

It took less than 60 seconds for dos Santos to earn his second consecutive first-round knockout victory under the UFC banner, another thunderous right hand felling the baby-faced opponent who shared the cage with him that night at the O2 Arena in London, England.

This weekend, that tall, skinny kid from Beverwijk, Netherlands whose UFC career started with a 54-second loss to the former heavyweight champion will step into the Octagon for the 13th time. He’s now 25, with a 29-5 record that includes a 9-3 mark in the UFC, and riding a four-fight winning streak into a co-main event showdown with former PRIDE star Mark Hunt in the UFC’s return to the Saitama Super Arena in Japan.

Once a boy amongst men, Stefan Struve has come a long way in the last four years, and the best is still to come.

“The losses? I don’t care about them anymore,” Struve says of the UFC losses he suffered at the hands of dos Santos, Roy Nelson, and Travis Browne. “The UFC is really the best place for a young guy to learn. You may not become champ right away, but what do you expect from a 21-year-old kid coming into the UFC heavyweight division? You think he’s going to run straight to a title shot? That’s not going to happen.

“In the UFC is where you learn the most, and like I said, those losses – I’m happy those losses happened. I put myself in a position for those guys to hit me the way they did, and that doesn’t happen anymore. We learned from that. We trained so many different things to get my standup better, use my reach more, keep my distance; that’s really starting to play out now.”

Beginning with his initial appearance in the Octagon opposite dos Santos, fans and critics have been waiting for the seven-foot tall Struve to make use of his exceptional length inside the cage.

Early on, the aptly nicknamed “Skyscraper” was too willing to go toe-to-toe with the opposition, who often made their way inside with little resistance. Over his last four fights, however, Struve has showed continued improvement, playing to his strengths, using his height and length to his advantage in wins over Pat Barry, Dave Herman, Lavar Johnson, and Stipe Miocic.

It has all been a learning process for the heavyweight, who has been developing his skills and honing his craft on the biggest stage in the sport.

“The losses made me really look at myself and my fighting, and what needed to be improved the most to go high up in the ranks and keep winning fights,” explains Struve. “I’ve been training with (head coach) Bob (Schreiber) for over 10 years now, and he’s really made me as a fighter. The other trainers just added their qualities, and showed me other things to help me improve even more.

“I’ve been working with Mousid Akhamrane, who is one of the best kickboxing coaches in the world. He’s a multiple time world champion himself, and he’s got a ton of students who he’s turned into world champions. I’m working with Remco Pardoel, who is a UFC veteran, and a pioneer in Europe for MMA. Both my standup and my ground game have improved immensely. I just feel really fit and fresh, and really I’m looking forward to the fight. I’m feeling really good, really confident. I can’t wait to get my fifth win in a row.”

In order to extend his winning streak to five, Struve will need to get through the resurgent Hunt.

Since losing his UFC debut to Sean McCorkle in September 2010, the wildly popular “Super Samoan” has collected three consecutive wins of his own, the most recent of which came last year in the same arena where he’ll face Struve on Saturday night.

At UFC 144, Hunt delighted the Japanese crowd with a first-round knockout win over perennial heavyweight gatekeeper Cheick Kongo. Not bad for a 38-year-old fighter who was expected to happily take a buyout from the UFC several years earlier when they acquired his contract following their purchase of the PRIDE Fighting Championships organization.

“He’s probably one of the hardest punchers in the UFC, but if you look at me, if I fight my fight the way I should, use the game plan we’ve laid out – use my reach, keep my distance – then those punches are no problem because he’s not touching me.

“That’s pretty simple for me, and it’s how I prepare for all my opponents. If I fight my own fight, I keep my distance, and don’t let them come close – even if they take me down, I’m fine on my back. They’re going to have to fight in my guard.”

In a division known for its knockout artists, the long and flexible Struve is just as comfortable fighting off his back as he is standing and striking. Of his 29 career wins, 16 have come by way of submission, including four of his nine UFC victories. It’s another weapon in his arsenal, and another way that the always-entertaining Struve can finish a fight, something he’s done in all but one of his Octagon victories.

“It still bothers me that I have a decision,” laughs Struve, who came away with a majority draw when he went to the scorecards with veteran Paul Buentello at UFC 107. “It’s annoying. I took it on short notice, so I’m going to use that as an excuse.”

Between the two of them, Hunt and Struve aren’t accustomed to seeing the scorecards. That shared penchant for finishing fights and delivering entertaining action inside the cage is one of the reasons so many people are looking forward to Saturday’s contest, Struve included.

Four years ago, Stefan Struve stepped into the Octagon for the first time, lasting just 54 seconds opposite a man who would go on to become heavyweight champion. He could have easily faded into the ether, another in the line of one-and-done competitors or fighters who enjoyed a cup of coffee in the big show but never managed to stick.

Instead, he continued to work hard after every fight, gained experience, and filled out his seven-foot frame, all with an eye on the future, confident that eventually, he would put it all together.

“If I hit someone with my jab right now, they’re really going to feel it. If you compare that to when I entered the UFC when I was 21 years old, there wasn’t nearly as much power in my shots as there is now.