"It’s no secret that if I show up for a fight in the UFC that I’m there
to fight. I’ll show up and I’ll give my all to win my fight. You won’t
see me losing a boring decision ever." - Stefan Struve 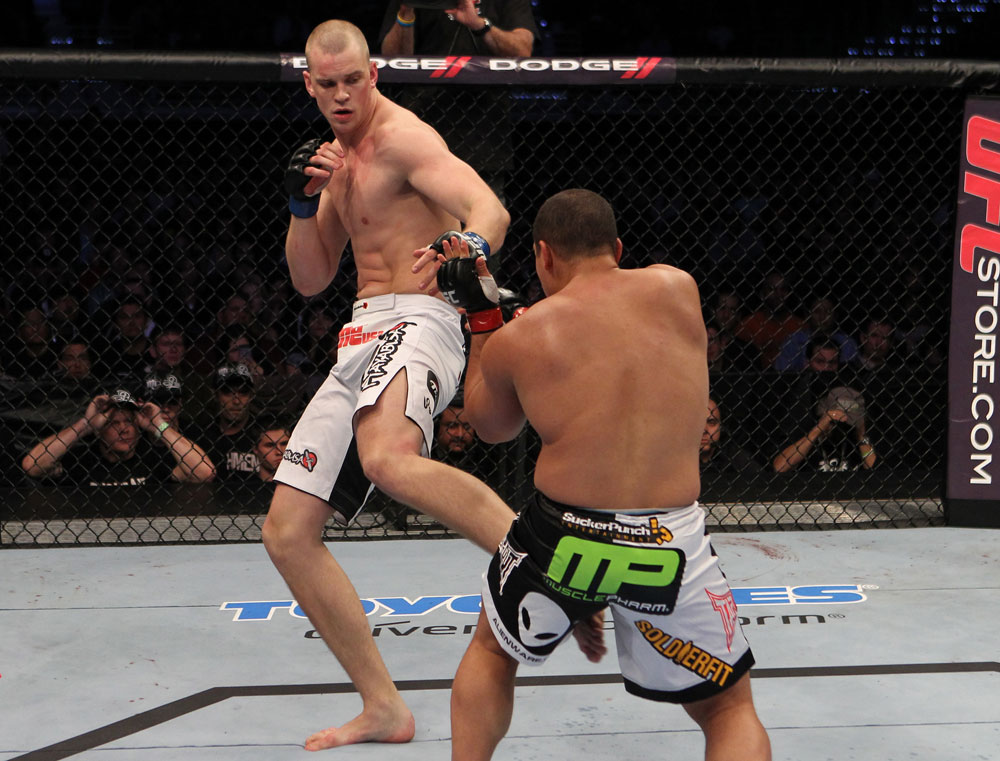 That was the first thought running through Stefan Struve’s mind when he was lifted high into the air by Pat Barry in their heavyweight bout last October. It was a déjà vu of sorts, since the Beverwijk native was often on the wrong end of slams to the mat in the days before he started to fill out his six-foot-11 frame.

“When I came into the gym at 14 years old at 180 pounds, I got used to getting slammed there and in my fights too. I was fighting bigger guys all the time. I was fighting at 185 pounds in the heavyweight division, so guys were picking me up and throwing me around.”

Apparently business as usual for Struve, Barry got the aptly-nicknamed “Skyscraper” as high in the air as he could, and then prepared to give him a rude introduction to the canvas in an attempt to break his opponent’s triangle choke. The next thought from Struve was the one that won him the fight.

“I was thinking ‘don’t let go,’ because I know that when somebody slams me, most of the time the triangle will get tighter if you break the fall the right way. So for me, it wasn’t that scary at all. People loved it, and it made the submission even better, in my opinion, because it was one helluva moment if you look back at it.”

Following the thudding slam, Struve’s calculation was correct, and the triangle did get tighter, forcing Barry to tap out at 3:22 of the second round. The victory, Struve’s 26th as a pro and sixth in the UFC, earned him Submission of the Night honors and continued to add to his reputation as a rising star and one of the most exciting heavyweights in the game. It also justified the UFC’s decision to put him in a co-main event slot just five months after a knockout loss to Travis Browne, the idea being that win or lose, Struve is going to fight.

“It’s awesome, and it’s a recognition that I’m doing the right things,” he said. “Even after my loss to Travis Browne - which was a fight that didn’t go my way, but I still think I should have won that fight - they still gave me the co-main event spot with Pat (Barry) the last fight. So that’s awesome to have a promotion that has got so much trust in you. And it’s no secret that if I show up for a fight in the UFC that I’m there to fight. I’ll show up and I’ll give my all to win my fight. You won’t see me losing a boring decision ever.”

Back in his familiar co-main event position for the fourth time this Wednesday against Dave Herman, Struve has settled into his role as a heavyweight action hero, and he’s even more comfortable than ever in the spotlight.

“It’s kinda normal for me now,” he said. “I’m feeling really relaxed, training camp has been perfect and I feel that I did everything I could do to have the best training camp possible. And all the media stuff, I actually like it, so for me that’s no problem. There’s no pressure added because of that.”

He’s even starting to see the benefits of being a UFC fighter back in his native Netherlands.

“In the States I’m getting recognized more, but it’s starting to get big here,” he said. “I’m starting to notice that people notice me when I walk around and it’s not a hard thing to notice me because I’m a very recognizable person. (Laughs)”

Yeah, he’s a little taller than most.

“Just a little tall,” he laughs. “But it’s getting bigger here. (Middleweight) Michael Kuiper was fighting for the first time at UFC 143, and MMA is growing. And though the government isn’t really fond of combat sports in Holland, it’s getting bigger. You can’t stop the growth of MMA with all the attention it’s getting and all the positive things the UFC’s bringing to MMA. Some MMA classes at our school have got 40 students, and a lot of the young guys come in because they’re playing the video game, and it’s awesome.”

Struve is on the roster for the latest incarnation of the UFC video game, UFC Undisputed 3, and it’s a tangible reminder for fighters of how far things have come since the dark ages of the sport. And though only 23 (he turns 24 three days after the Herman bout), if he needs any reminder of how things once were, it can certainly come from head trainer Bob Schrijber (a PRIDE vet) and UFC vet Remco Pardoel. But then again, Struve has been fighting as an amateur since he was 16, so he’s seen his own share of changes over the years.

“When I started to fight, I was 16 years old and they still had those old rules and it was still kinda like the old days in Holland,” he said. “They had the old rules with the rope escapes and everything. But I’ve seen the development and it’s gone so, so fast for me. When I was 18 years old, I was fighting in the US for the first time, and I made my debut as a professional fighter when I was 17 years old, and I’m already fighting in the UFC for three years now. It’s incredible.”

It’s an accomplishment made even sweeter by the fact that his family has been behind him every step of the way, even from the beginning.

“My brother was already doing it and he brought me to the gym, so they (his parents) were already a little bit into it,” said Struve. “I had the best childhood you could imagine, me and my brother, and they always supported us from the beginning. Of course they were a little worried when I had a fight coming up and I was 16 years old and fighting heavyweights, big, ugly guys that stepped into the ring with me. (Laughs) But I basically won all the fights, and now, they couldn’t be more proud with the things I’m achieving. They love watching me fight, and they’re so happy when I’m back home with another win. It’s awesome.”

So would Struve change anything if he could do it again? I bet you know the answer to this one already.

“If I could change something, it would be to start with training way earlier than I did when I was 14,” he said. “I would have started when I was nine or 10 years old. But for all the rest, all the things I picked up and all the countries I’ve visited because I had a fight coming up, and all the things I encountered with my coaches who I’m still with now, all the good things that it gave me, I wouldn’t change a thing.”