Stefan Struve: Back for Good 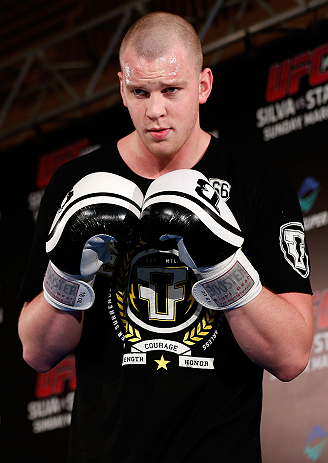 July 2014. Las Vegas. The worst year of Stefan Struve’s life was about to come to what he expected to be a triumphant close. Nearly 12 months after being diagnosed with a leaking bicuspid aortic valve in his heart, he had been cleared to resume his professional career and fight Matt Mitrione at UFC 175.

Then it didn’t happen.

Struve felt faint in the locker room and passed out briefly. Doctors rushed to him, and while he came to quickly, he was obviously in no condition to fight. Struve was crushed, not just because he wouldn’t fight that night, but because he thought he would never fight again.

“In the locker room, we had no idea what happened, so at the time all I could think about was that my career is over,” the 26-year-old Struve said. “I came back from a long period of time where they diagnosed me with a heart condition and I thought they’re never gonna let me fight again after what happened here. The first thing I thought about was my heart and that just made it worse. I had no idea what was going on, so it was a scary situation.”

To this day, Struve says that what happened that night was something nobody could have seen coming. And that’s true, but he does admit that members of his team told him that he wasn’t the same Stefan Struve in the days leading up to the fight. And as it turned out, what caused the fainting spell in the locker room had a lot to do with the heart medication he was on, in addition to the stress of the previous 11 months, which included the passing of his father in October of 2013 after a battle with cancer.

“Several people told me I wasn’t myself, but I really didn’t notice,” he said. “I just wasn’t the happy, positive person I am normally. All the negative things became a lot more negative, and in the end it turned out that it was the medication I was on back then that caused it. It came out of nowhere and it just became too much for my head. I couldn’t focus on anything else, and the amount of stress built up in my head and the medication worsened that. And it wasn’t just that, but an awful lot of things happened in my life that year and it all came together in that moment.”

Following UFC 175, it was back to the doctor for another round of exams to see what went wrong, how to fix it, and to determine whether he could fight again. After reports on his heart came back fine, a switch of medications has Struve confident that he is back for good.

“The way I feel right now, with the medication I’m on, I don’t think anything will happen. We’ve really done everything to make sure I’m in the best condition physically and mentally to perform and I really believe I’m going to put on one of my best fights I’ve ever fought for the UFC.”

Oh yeah, Struve is fighting this Saturday night in Phoenix. And though he probably could have asked for a way to ease himself back into things in his first bout since March of 2013, that’s not his way, so he’ll be in with fellow Dutchman Alistair Overeem. The way he sees it, when you’re in the heavyweight top 15, you take on the biggest name you can, layoff or no layoff.

“I got another shot and I didn’t care who it was,” Beverwijk’s Struve said. “Look at my last two opponents; (Stipe) Miocic is fighting for a title shot (against Junior Dos Santos) and (Mark) Hunt just got his shot. In my opinion, I should have won both of those fights. The Hunt fight didn’t go my way because physically there was something very wrong with me at that point, so this is where I should be. Alistair has gone through some adversity in his career. He lost three of his last four fights by knockout, but obviously he’s a big name, and he’s a very good opponent, but I’m better. It’s simple as that. I’m better, I’ve got more potential and I did everything I could possibly do to prepare myself for this fight, so I know if I fight my fight, I’m gonna win.”

Struve is the only man to defeat Miocic, stopping him in the second round in September of 2012. His most recent bout against Hunt was another Fight of the Night award winner, with Hunt prevailing via third-round TKO. That’s a 1-1 slate in his last two, but both showed that Struve could hang with the best among the big men. Overeem has been in that elite group for a while, but his recent string of defeats have him holding on to that status for dear life. And if anyone knows what Overeem has done and what he can do when he’s on, it’s Struve.

“Of course, I enjoyed watching his fights,” he said of watching “The Reem” during his formative fighting years. “I was happy that Holland had someone who was doing well and I planned to follow in his footsteps. Look where we’re at right now.”

I think some folks call it the crossroads. If Struve wins, he’s back in a place some thought he never would be in again. If Overeem loses, that would leave him with a 2-4 UFC record and an uncertain future in the Octagon. Those are high stakes, but Struve has a more personal feel for the matter, considering that just fighting again is a victory in and of itself. He still wants the real thing though.

“Getting ready for a fight is no fun, but I did miss it of course,” he laughs. “But getting your hand raised in the Octagon after a win is all worth it. After putting in such a hard camp, all the stress is gone when you fight and your hand is raised. It’s such a good feeling, and a feeling I can only get in there on Saturday.”

And if that’s the case this weekend, Struve believes this is only the beginning.