"In wrestling, I’ve lost matches before and stuff like that, so it’s always a thing where you kind of learn from it." - Cain Velasquez 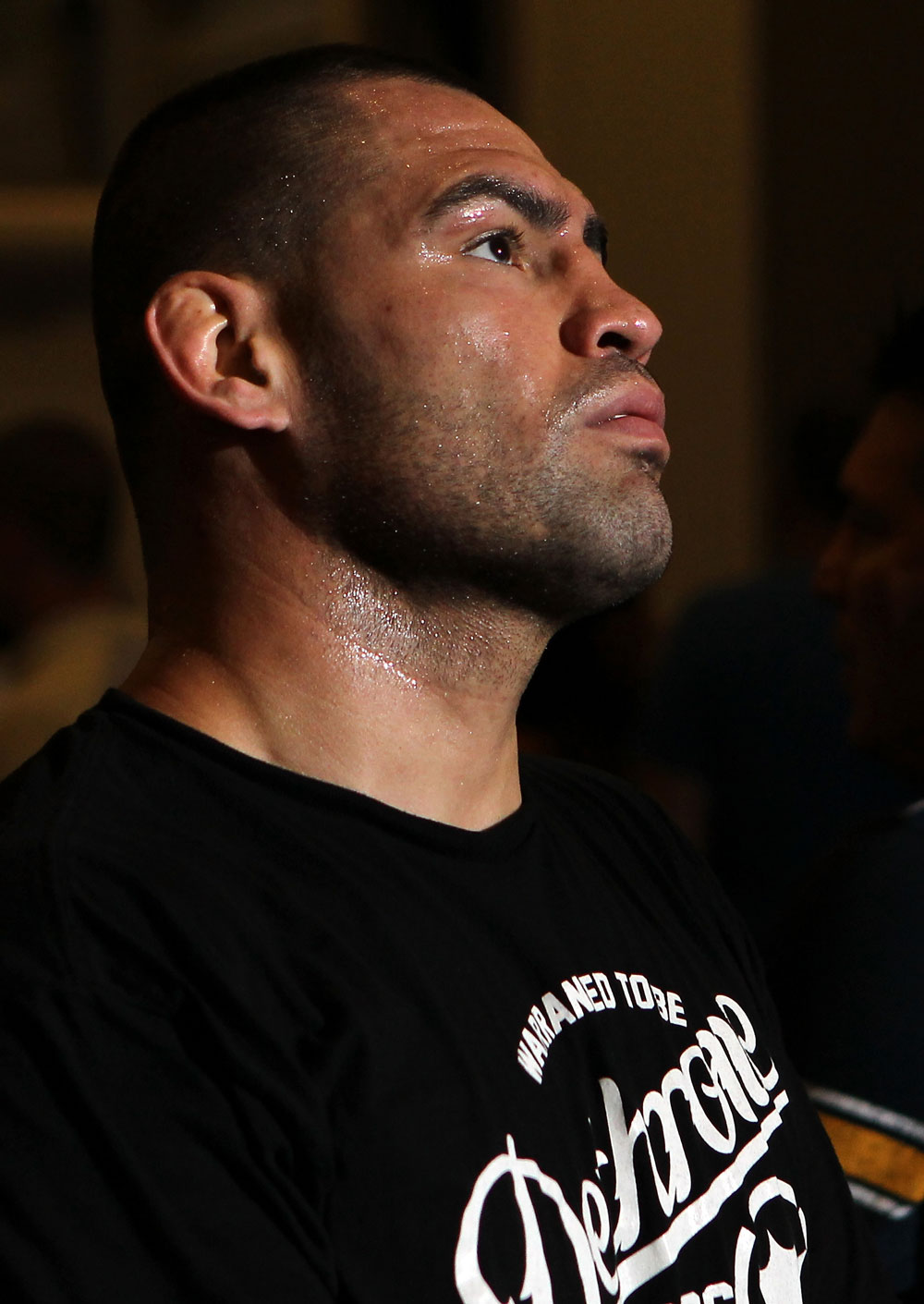 Moments after Cain Velasquez had the UFC heavyweight championship belt removed from his grasp by the right hand of Junior dos Santos last November, and just before fair-weather fans threw dirt on him for having the nerve to be human, the Californian was seen in the Octagon talking with his longtime coach Javier Mendez. It didn’t look to be a ‘what just happened?’ conversation, but more of a ‘what did I do wrong and how do I fix it?’ talk.

And just like that, you knew that Velasquez was going to be okay. Sure the loss of the title and the loss of the “0” hurt, but it wasn’t going to crush him indefinitely or define him. It was done, and he couldn’t change it, so it was time to move on.

“I’m definitely able to let it go,” said Velasquez during a recent media teleconference to promote his UFC 146 bout with Antonio “Bigfoot” Silva this Saturday in Las Vegas. “In wrestling, I’ve lost matches before and stuff like that, so it’s always a thing where you kind of learn from it.  You just watch film but you don’t really keep it with you and always think about it.  It’s the kind of thing where you just learn from it right away and then move on.”

That’s not just a wrestler’s mindset; it’s one shared by champions. Welterweight great Matt Hughes always said that an unbeaten record means that you’re not fighting the right people. Multi-division boxing champion Sugar Shane Mosley, at the height of his powers as lightweight champ, said that he knew there was someone out there that had his number.

So does current champion dos Santos, who defends his crown for the first time in Saturday’s main event against Frank Mir, have Velasquez’ number? The 29-year old native of Yuma, Arizona isn’t convinced..

“Just fighting against somebody so talented like dos Santos, that kind of stuff happens,” said Velasquez. “So it's a thing that happened.  We've just got to learn from it and take it to your next fights.”

There was no talk of the knee injury he brought into the Octagon that night, no mention of the overwhelming media schedule he took on. That’s Velasquez’ personality. He will win or lose with class, and he’s well aware that everything he dealt with last November, so did dos Santos. So why dwell on it? Move on.

And that’s what he did.

After a break to heal and enjoy some down time with his family, Velasquez returned to the AKA gym in San Jose, and it was time to work again. The media attention had died down, the hype surrounding his unbeaten record had dissipated, and now he was back in the heavyweight rat race. And he liked it.

“I just took my time getting back into the gym, and as the weeks went on, I just kind of picked up the pace of training, not trying to rush the training, as you can get injured and stuff like that,” he said. “So took my time and it just felt great.  I felt like with that long training camp that I've had really got my shape back together, my cardio, everything.  So I feel good.”

Ironically, it was supposed to be Mir facing Velasquez down this weekend in Vegas. But after much shuffling of the card due to licensing issues and injuries, it was former Strikeforce standout Silva who got the assignment to try and put a second loss on Velasquez’s record.

“Bigfoot's just a big guy,” said Velasquez. “He has a lot of power, and he does everything well.  He's good on the ground, he's good on his feet with his punches, kicks, and knees, and he has good cardio, so he's a guy that's really well rounded everywhere.”

Sounds like trouble, but when your victims’ list already includes the names Brock Lesnar, Minotauro Nogueira, Ben Rothwell, and Cheick Kongo, it’s pretty safe to say that you’ve seen practically everything the fight game can throw at you. And with recent Strikeforce Grand Prix winner Daniel Cormier being a training partner, one with the knowledge of having knocked out Silva, Velasquez has to be the favorite heading into the bout. But he’s not asking for his win bonus just yet, as he knows MMA math doesn’t always work in the favorite’s favor.

“His (Cormier’s) fight with Bigfoot was so fast and we’re just expecting a different type of fighter than the one that fought that night. Bigfoot is much better now.  So that’s the type of opponent that we’re training for.”

As for Velasquez being better than he was on November 12, 2011, he would bet the house on it, but not because he’s changed anything drastically. He’s just continued on the path he was on before he lost his title. The quest? To just keep getting better. And while his rapid success may have clouded everyone’s vision, remember, he’s only had 10 pro fights. So it’s safe to say that we haven’t even seen his best yet.

“There is always room for improvement in every area, standing, on the ground, just overall,” he said. “So there really hasn't been anything different.”

He means it too, making it business as usual for Cain Velasquez, a poker-faced competitor who knows nothing in this world is ever perfect. You just take your setbacks, regroup, and keep moving forward.

“That’s what you have to do,” he said. “I wasn’t thinking that I was going to go through my entire career undefeated.  You kind of expect to lose sometimes.  It’s the kind of thing that just happens.  If you were better on that day, then that’s all it is.  Right now I’m just getting ready for the next fight.”