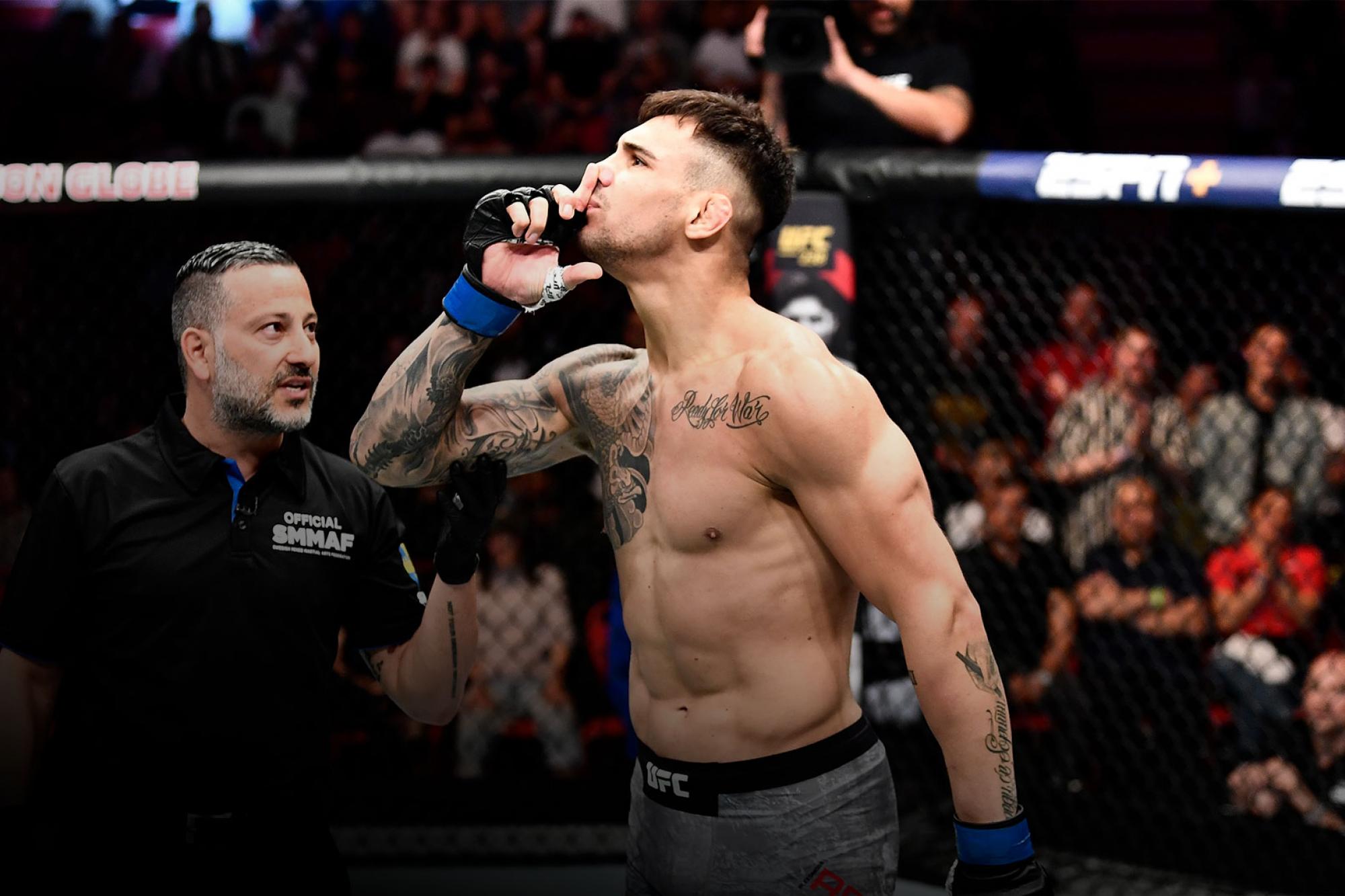 Aleksandar Rakic spent two months in a grueling training camp and he intends to make Anthony Smith pay for all the hard work he put in
By E. Spencer Kyte, on Twitter @SpencerKyte • Aug. 28, 2020

Very seldom will you hear a fighter begin a sentence with “If I’m going to lose” or some other form of acknowledging the potential of defeat, but in the case of Austrian light heavyweight Aleksandar Rakic, it actually works.

“If I lose again, I want to always lose like this because this wasn’t actually a loss,” said the 28-year-old, who returns to action in the main event of Saturday night’s show at the UFC Apex against veteran Anthony Smith.

The fight Rakic is referencing as his non-loss defeat is his December clash with former title challenger Volkan Oezdemir in Busan, South Korea — a three-round affair that went the distance and ended with Rakic on the wrong side of a split decision verdict that many didn’t agree with.

All three judges saw the first round in favor of Rakic, who entered the bout with a 4-0 mark inside the Octagon and riding a 12-fight winning streak, overall. They each also saw the final round for Oezdemir, who had rebounded from being on the unhappy end of a split decision loss to Dominick Reyes earlier in the year with a second-round knockout win over Ilir Latifi in August, making the middle stanza the one that ultimately determined the outcome of the fight.

MORE: Fight by Fight Preview | Significant Stats | Fighters On The Rise | Anthony Smith Doesn't Give Up

Two of the officials tasked with scoring the bout gave the second — and therefore the fight — to Oezdemir, though seven of the eight media members that submitted their at-home scorecards to MMA Decisions, a website that tracks MMA scoring, saw the fight in favor of Rakic, including two outlets awarding the streaking contender all three rounds.

“Everybody around the world knows that I won the fight; you just need to see the numbers,” said Rakic, who countered well throughout and did an excellent job of slipping off the center line as Oezdemir looked to land powerful shots coming forward.

“Everybody knows that I won that fight and even the UFC knows I won that fight because a couple months later, I got a new contract and now they’re offering me Anthony Smith, a more highly ranked opponent than Volkan,” he added, looking at the positive end result of a frustrating conclusion to his 2019 campaign in the cage. “For me, that gives me the feeling that they know who won that fight in Korea.”

Saturday’s contest in Las Vegas will wrap up Rakic’s third year on the UFC roster, and regardless of how you scored his most recent outing against Oezdemir, it’s difficult not to be intrigued by what the Vienna native brings to the table in the suddenly wide open division.

Currently stationed at No. 8 in the rankings, Rakic is one round on one scorecard away from being 5-0 in the UFC and running his winning streak to a baker’s dozen. He’s already posted highlight reel finishes of Devin Clark and Jimi Manuwa and is just at the beginning of his athletic prime while still being one of the youngest fighters in the Top 10.

In addition to the potential for development that generally comes as a fighter continues to gain more top end experience and grows into the “adult strength” stage of their careers, the fact that Rakic has consistently chosen to step out of his comfort zone in order to get the best training possible is another element that makes him one to watch in the light heavyweight division.

After making frequent trips to American Top Team in South Florida ahead of his first several UFC fights, increased travel restrictions created by the COVID-19 pandemic forced Rakic to seek out alternative options ahead of this weekend’s bout with Smith, settling on a familiar ATT outpost not too far away from home.

“I was in American Top Team Zagreb last year — one of my friends was training there — and when I got the name Anthony Smith, I talked to my coaches and we were searching for somewhere we could have high quality training and that was American Top Team Zagreb,” Rakic said regarding his decision to shift his training camp to the Croatian capital, which is approximately four hours by car from where he resides in Vienna.

“My whole team was with me the whole camp and the entire focus was on me, 100 percent,” continued Rakic, who added a wrestling coach to his coaching mix following his loss to Oezdemir and spent two months away from his wife and son preparing for this weekend’s main event matchup with Smith. “When we sparred, it was like a fight, and I had amazing sparring partners.

“It was a really hard camp — hard work, but high quality — and I think that will show on Saturday.”

Already an intriguing matchup when the fight was first announced, the bout atop the marquee this weekend in Las Vegas has become even more compelling and integral to determining what the light heavyweight division looks like heading into the fall in the wake of long-time champion Jon Jones relinquishing his title.

Top contenders Dominick Reyes and Jan Blachowicz will battle for the vacant belt next month at UFC 253, with veteran Brazilians and former title challengers Glover Teixeira and Thiago Santos slated to do battle two weeks earlier.

Those two matchups feature the top four fighters in the rankings at the moment, with Smith currently holding down the No. 5 spot, which means the opportunity is there for Rakic to enter the title conversation with a strong performance against the experienced veteran in his first UFC main event this weekend.

“Anthony is an experienced guy,” Rakic said of the 48-fight veteran, who enters Saturday’s contest off a fifth-round stoppage loss to Teixeira in May. “He fought five rounds against Jon (Jones) and has fought many former champions — Rashad (Evans), Shogun (Rua)— and he’s a good opponent at this time for me.

“He has the lion heart, like his nickname, he’s mentally very strong and he can take a beating, plus he can also bring it and finish people. But I’m the most explosive guy in the division — that’s why they call me ‘Rocket’ — and I’m going to show that on Saturday night.”

“This fight is the biggest fight of my career and the most important fight for me,” added Rakic. “I wasn’t with my family for almost two months. I went through hell in Zagreb and someone needs to pay for that and it’s going to be Anthony Smith. I need to make a statement and I will make a statement on Saturday.”