“When someone comes back from war and they get discharged from the military, it’s a very difficult transition.” - Brian Stann

Stann is the president of Hire Heroes USA, having left active duty in May 2008 as a United States Marine Corps Captain with a Silver Star. For each e-badge that a reader shares via Twitter or Facebook between now and Sunday, AOL will donate to HHUSA. Click here to help. 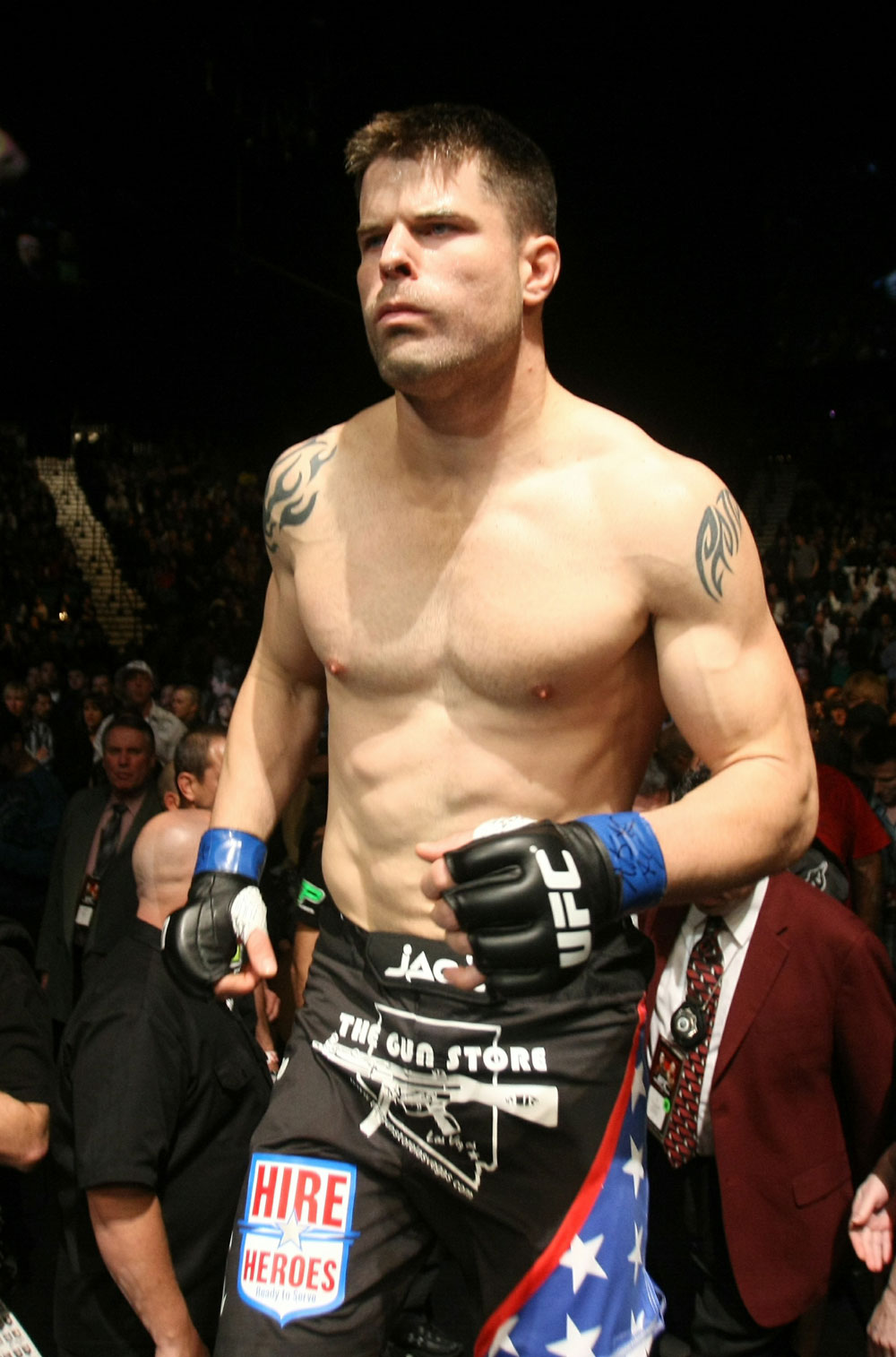 For members of the military, the fight isn’t always over after the guns are put away, the medals are handed out, and the celebrations take place. For some, the battle is just beginning, not just for the servicemen or women returning home, but for the families they were forced to leave behind.

“It’s extremely difficult,” said Brian Stann, UFC middleweight standout and a veteran of the United States Marine Corps. “Their entire life is almost put on hold. Your spouse, your father, or whoever it is from your family who leaves, they’re in an area where they can’t contact you as much and it’s a very challenging time, especially now, obviously, with some of the things that they’re going through with the budget and these guys’ pay being affected. It’s a real challenge. For me personally, I had to come back to America and get to know my wife all over again. We had just been married and I left for seven months and I went through a very difficult deployment where a lot of changes in me occurred. So you come back after not seeing each other for seven months, and things are different. It’s very difficult, and families really have to be that anchor of support for their servicemen and women who come back.”

Having been through such struggles, both on the battlefield – where he earned a Silver Star for valor in combat – and off it, Stann is now president of the non-profit Hire Heroes USA organization, where he and his team work tirelessly to aid in veterans’ transition back into everyday life.

“Every time they pass it on and go to the site and showcase this via Facebook or Twitter, it will donate minutes of job assistance,” said Stann of the program, which will see AOL translate the minutes into dollars donated to the organization. “Our goal is 63,000 minutes, and how I broke it down is that it will take my staff, on average, 30 to 45 minutes, per resume that they revise with a veteran. And that includes calling the veteran, talking to them about exactly what kind of job they’re looking to get, and tailoring their resume to those job requirements and job descriptions. And they usually get anywhere from three to five resumes done a day, along with all their other daily tasks. So with 63,000 minutes, that can finance a whole lot of job assistance for veterans.”

Yet once the week is over, that’s far from the end for the program, as visitors to the website in the future will see exactly how the funds were used to help military veterans.

“We want to show people that this campaign wasn’t just about getting attention to AOL’s website or Hire Heroes USA’s website,” said Stann. “It was about helping veterans get jobs and here’s exactly what it went to, and we’ll be able to showcase that.”

And as Stann points out, there’s no better week to point out the importance of families in the reintegration of veterans into everyday life because this is not an individual effort, not by a longshot.

“When someone comes back from war and they get discharged from the military, whether it’s medical because they were wounded or they get off active duty on their own accord, it’s a very difficult transition,” he said. “You’re moving into a completely different world and a lot of focus has been on the invisible wounds of war, like post-traumatic stress and post-traumatic brain injuries. A lot of those things go away. Post-traumatic stress goes away when someone is reintegrated back into society and they have responsibilities bestowed on them again. When they come back to society and they don’t find a job, now they have financial troubles and financial stresses that obviously impact them, their spouses and their families, and that really hurts them, their lives, and their livelihoods. When you can reintegrate them back into society and immediately get them back into the workforce and they’re occupied and they’re contributing, it’s amazing how successful the rest of their lives are.”

Given his devotion to this cause and his daily work with Hire Heroes USA, you can almost forget that Stann has a pretty intense day job as well, one that isn’t getting any easier when he faces Jorge Santiago in a pivotal 185-pound matchup on May 28th’s UFC 130 card in Las Vegas. So how does the 30 year old “All-American” get it all done?

“It’s really easy because I have an amazing team,” he said. “I have some very, very good employees who are on this team and work for veterans every single day. I don’t get paid through the foundation, so people don’t donate money towards a Brian Stann salary, which makes it much easier for me to say ‘hey guys, I’m training three times today; I’m not gonna be available during these hours, but during these hours I can be.’ And also, being a small charity that is growing, especially in the last year and a half, we get much more media than a normal charity of our size would because of my fighting career. I’m very fortunate that the mixed martial arts media is also very patriotic and they love to include Hire Heroes USA in the articles about me, and they get updates and spread the message. That has been instrumental in our growth. It brings in more donations, it brings in more companies that want to hire our veterans, and it brings in more veterans who step up and say that they need help, and it’s vital to me, being the president of this organization. My job is to spread the message, bring in money, and make the strategic partnerships that we need to continue to accomplish our mission and out growth, and fighting goes right in line with that.”

In other words, he’s not slacking off at the gym.

“It doesn’t eat away at my training schedule at all,” he said. “There are a lot of hours in the day. A lot of fighters decide to either take a nap, maybe play some video games, and other fighters do other things like I am, and this is what I choose to do.”

And if you talk to him for any length of time about Hire Heroes USA and his dedication to his brothers and sisters in arms, it’s clear that he’s found one of his life’s passions. The other one, he’ll indulge in a little over six weeks from now when he faces a returning UFC vet with the intention of stopping Stann’s unbeaten run at middleweight.

“Jorge Santiago is obviously a huge step up in competition for me,” said Stann, who is coming off back-to-back finishes of Mike Massenzio and Chris Leben. “It’s a fight that I’m honored that I’m able to get, seeing that he was a (Sengoku) champion that has crossed over, and I’m the first one that gets to face him. You can expect an action-packed fight. He’s coming in to make a statement, and I’m coming in to take his spot in the Top Ten, so you can expect a fast-paced fight where two guys are moving and going to a finish. He has a great ability to find a way to win a fight, and I’ve gotta stay a step ahead of him and I’ve gotta finish him.”

First lady Michelle Obama and Dr. Jill Biden have launched their first major initiative to raise awareness of the unique needs of our nation’s military families. They are calling on all Americans to do their part to make it easier for military families to serve their country. UFC fighter Brian Stann has a way to help the charity he runs, Hire Heroes USA.

AOL is promoting a military badge beginning April 12th through the Military Families Hub: http://jobs.aol.com/hub/militarybadge . For each badge that a reader shares via Twitter or Facebook, AOL will donate to Hire Heroes USA, which helps military families transition and find jobs.

Stann is the president of HHUSA, having left active duty in May 2008 as a United States Marine Corps Captain with a Silver Star. His military career included two tours in Operation Iraqi Freedom. As he neared the conclusion of his military service, Brian became increasingly involved with mixed martial arts, eventually becoming the WEC light-heavyweight champion. Brian made his UFC debut in April 2009 and is next slated to take on Jorge Santiago at UFC 130.