"After defeating Thiago I will think of the next step. But soon I will be light heavyweight champion." - Stanislav Nedkov 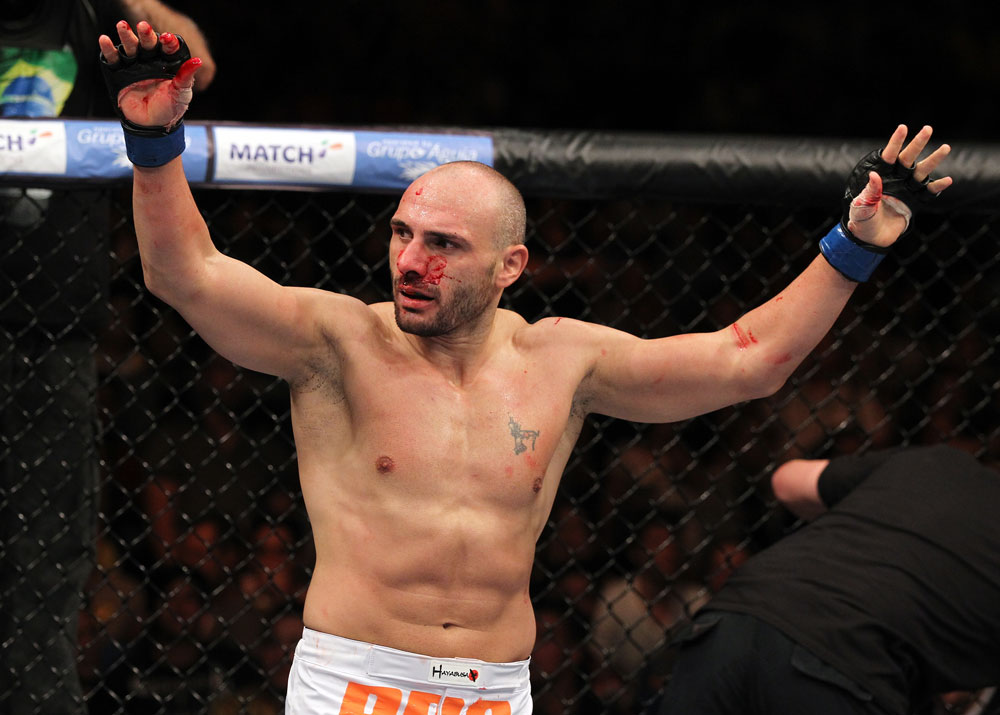 For a while, it appeared that Stanislav Nedkov was a figment of UFC fans’ imaginations, something like the Loch Ness monster or Bigfoot. Every time it was announced that the light heavyweight from Bulgaria was about to make his Octagon debut, something happened to make him disappear again.

First it was a UFC 117 bout in 2010 against Rodney Wallace that was scrapped due to an injury suffered by Nedkov. Next, a UFC 120 bout with Steve Cantwell was put to rest on fight week when Cantwell hurt his knee and withdrew.

“The dream of every MMA fighter is to fight in UFC and I was very happy when I signed my contract with UFC,” said Nedkov through translator / manager Kamen Popov. “But twice my debut was delayed. The first time I was injured during my preparation. The second time my opponent was injured 24 hours before fight. I took it all very calm and had faith in the Lord and continued my training. I knew that soon I would make my debut and that I had to be ready for it.”

Seemingly cursed to never set foot in the Octagon, Nedkov got a third assignment, this time to face Luiz Cane at UFC 134 in August of 2011. Finally, the fight took place, and Nedkov didn’t disappoint, stopping Cane in the first round, doing it in his opponent’s backyard of Brazil in the process. Nedkov admits that part of it was a little nerve-racking, saying “The fact that my debut was in the home of my opponent, who also had a lot of experience in UFC, further increased tensions in me.”

He got the job done though, improving his perfect pro MMA record to 12-0. In the process, he also made history as the first Bulgarian to win a UFC bout, and the way the 30-year-old from Veliko Turnovo describes it, that was the biggest deal of all.

“It was a big responsibility, and the pressure on me was enormous,” said Nedkov. “I was eager to get the first win for Bulgaria in the UFC. Bulgaria has many, many UFC fans and I wanted to make them happy and bring them a victory. Thank God that chose me for this.”

A two-time national freestyle wrestling champion, as well as a Brazilian Jiu-Jitsu black belt, it was Nedkov’s heavy hands that got him the win over Cane, and with half of his wins coming by knockout (including a 2009 win over Travis Wiuff), his Saturday showdown with another Brazilian banger, Thiago Silva, isn’t a grappler vs. striker matchup, but a fight that could produce some serious fireworks or at least an explosive ending. Nedkov has an idea which way this one is heading.

“Thiago Silva is a good fighter, but I know how to beat him,” he said.

To help get that result, Nedkov (who also owns a 2009 win over former UFC heavyweight champion Kevin Randleman) has supplemented his training at home in Bulgaria with a trip to Abu Dhabi to work on his Muay Thai and jiu-jitsu games. So traveling to China shouldn’t be an issue, right?

“The difficulties are the time difference between Bulgaria and these countries and difficult air travel,” he said. “But in all these countries, I have met many friends and support from fans of MMA. I hope Chinese fans to support me.”

With his aggressive attack and ability to end the fight with a single punch, that shouldn’t be an issue this weekend. As for the next step in a career finally back on the right track, Nedkov will take the ‘first things first’ route.

“After defeating Thiago I will think of the next step,” he said. “But soon I will be light heavyweight champion.”