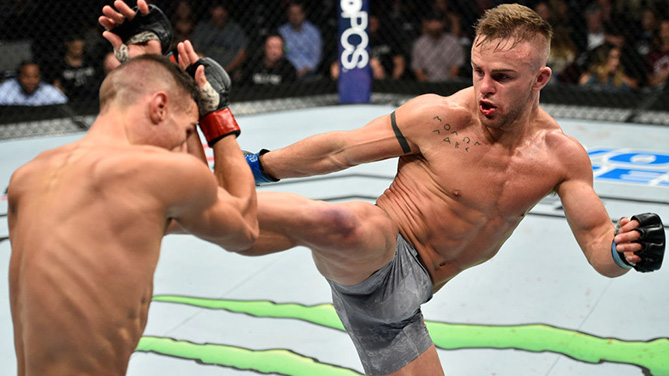 At the UFC level, everyone can fight. Some better than others, of course, but when the Octagon door shuts, the adage of “on any given night…” most certainly applies.

Consequently, on a level playing field, it’s the intangibles that separate the haves from the have nots over the long run, and one of those intangibles is being able to handle the bright lights on the fight week before a big Pay-Per-View event.

Bantamweight prospect Cody Stamann is getting that education in abundance since his UFC debut last July, with each of his bouts in the big show, including his next one against Bryan Caraway this Saturday, taking place on a numbered event in Las Vegas.

“I’m a lucky guy,” said Michigan’s Stamann. “If you’re gonna fight, fighting in Vegas is probably the best place. And I’m familiar with it, so it’s getting easier every time.”

For those who haven’t seen the difference between a PPV fight week and one for a Fight Night show, picture a lot more people, bigger names in championship fights, and increased media attention. In other words, just being around that atmosphere gets a fighter like Stamann ready for his leap to those huge main cards he wants to be a part of.

“I guess I don’t know anything else other than the Pay-Per-View cards, so I can’t say what the fight nights would be like, but fighting on a card with a lot of other talented guys, a lot of guys that I’ve looked up to for a really long time, it’s really cool,” he said. “It’s kind of a dream come true for me, just to have a legend like Frankie Edgar fighting the same night as I’m fighting, it’s so awesome. And then being in Vegas, having all those resources available to me all the time makes a lot of stuff a lot easier. I’d like to be on the actual Pay-Per-View, but that’s something for my next fight.”

He may be right. Already a winner over fellow prospects Terrion Ware and Tom Duquesnoy, the 28-year-old Stamann now takes a step up against the No. 7-ranked Caraway, a veteran contender coming off consecutive wins over Eddie Wineland and Aljamain Sterling. It’s a tough test, but it’s just the one Stamann wants and needs if he wants to hit the marks he’s set for himself this year.

“In 2018, my goal is to be a contender,” he said. “I want to be one of the top ten guys, one of the guys that people see as someone that can be a champion. In fighting a guy like Bryan Caraway, the number seven guy in the world, I think I’m heading in the right direction. I’ve never really gloated about my previous accomplishments, I’ve always just kind of looked forward to the next one. So this fight is the fight that puts me in top ten, and my next fight in 2018 will put me in that place for a potential belt fight.”

That’s heady stuff for a young man who was getting ready for a local fight in Grand Rapids at this time last year. He would win that fight and one more, extending his winning streak to seven, before getting the UFC call, one he knew he would eventually get. From there, it’s been a whole new world.

“2017 was definitely a game changer for me,” Stamann said. “Going from fighting in a local show to fighting in the UFC to people looking at me as a contender, it was a huge jump, a jump I always knew I’d make. I worked hard for a really long time, and now people are starting to notice.”

And while the letters on the gloves say U-F-C, it’s been business as usual for the Sparta product in the Octagon. Yet outside, nothing is like it used to be.

“I always trained with guys that were UFC level, and a lot of the guys that I fought before the UFC were guys that easily could have been there,” he said. “So, for me, not a lot has changed. The one thing that changed for me is that my entire life revolves around my training and my fighting. Before, I had so many other things I had to juggle, and now I just have a singular focus, and that’s my fight. That has made such a huge difference in my ability to improve and to get better. I have more time to dedicate to different things in MMA, so if there’s one thing that’s changed for me, it’s the lifestyle. I’m really living and competing as a martial artist.”

Soon, those fighters he used to look up to might be his opponents. He can’t wait.

“It’s really exciting,” Stamann said. “There’s been a lot of hard work, a lot of things I’ve done behind the scenes to be here, and I’m watching everything I’ve manifested over a long period of time unfolding in front of me. It’s a pretty surreal feeling knowing that I am doing it, I am there, and I’m going to be fighting these guys very soon. It’s a dream come true.