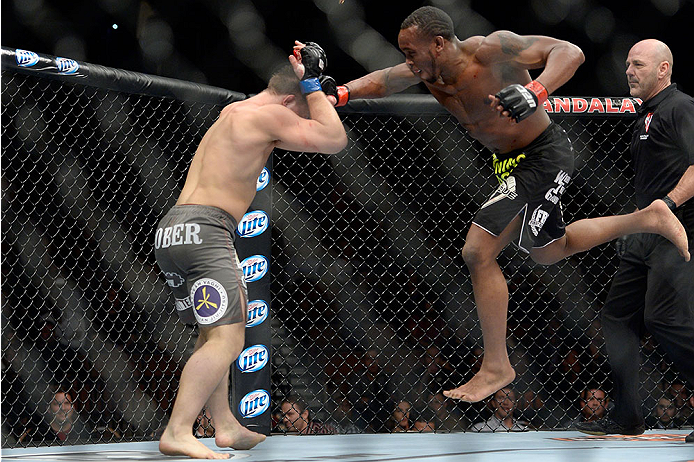 Sean Spencer is a new man. Yes, if you had a nickel for every athlete who said that – especially in January – you could buy yourself a nice car. But in the case of Dallas’ Spencer, it’s accurate.

You can hear it in his voice, you can tell by the words coming out of his mouth, especially since there are even more of them than ever before. Once one of the most taciturn fighters in the UFC, the 28-year-old welterweight is not letting any opportunity to tell his story pass by.

“I couldn’t really have a solid conversation with certain people about my life and about anything because I wasn’t where I needed to be – mentally, physically or spiritually,” Spencer said. “So I kind of took a hiatus. I had that fight with (Cathal) Pendred, I didn’t have any fights after that, and then I had that fight with Mike Pyle back in May, but then I got injured in training camp and my mind wasn’t right. It was just one of those things that I was in a slump. I didn’t know what I was doing. I had to grow through that.”

The loss to Pendred in January of last year was the third of Spencer’s six-fight UFC run and it was widely panned as one of the worst decisions of the year. A year later, Spencer takes the high road when talking about the devastating defeat.

“Everything that happened in the past is in the past,” he said. “I just have to learn to channel that in a different way. I don’t have any resentment with what the judges did and I’m totally at peace with everything that’s happened up to this point. More power to Cathal Pendred. He came in, he did what he had to do. It was just one of those things.”

One of those things that doesn’t just cost a fighter half a paycheck when he doesn’t get his win bonus, but could also get him cut from the roster. That wasn’t the case for Spencer, who kept his job and received his win bonus from the UFC, but that didn’t soothe things for him internally.

“The UFC gave me my win bonus, but I didn’t feel deserving of that win bonus,” he said. “I didn’t make all the right decisions in the preparation for that fight to really go out there and do exactly what I was supposed to do to him. I think I won the fight, but in my heart, I lost because I didn’t do everything I could in my power to prepare for him and really destroy him like I wanted to. That was a loss for me.”

That wasn’t the turning point though. Four months later, Spencer was preparing for a bout with Mike Pyle at UFC 187, but was forced to withdraw due to injury. Even then, it was business as usual for the Bluefield, Virginia native, and it remained so when he got the call to meet Pyle in a rescheduled bout this Saturday in Las Vegas.

Go inside the Pyle-Spencer matchup

“I wanted to be excited and have that energy that fighters get when they find out about an opponent, but it didn’t hit me like that,” he said. “I tried to make it happen, but it has to happen organically. I didn’t have my head in the game. Then it just kind of happened.”

A week before Christmas, as Spencer began his training camp for Pyle, he hurt his shoulder. Yoga helped get him back in working order, and all of a sudden, he began getting excited to fight again.

And yeah, Sean Spencer sounds like a new man.

“I’m the same person, but mentally, physically and spiritually, I’ve changed,” he said. “I’ve evolved into my higher self. I’ve grown through my mistakes, I’ve grown through all the regrets I’ve had, and the greatest thing about it is that anybody on the planet can do it. You just have to be willing to commit to the responsibility of becoming your higher self.”

So what does that mean for fight night in Las Vegas on Saturday?

“It affects everything positively,” Spencer said. “Me having a fresh perspective and a fresh mindset and the ability to tell the truth, it changes everything. I haven’t ever fought feeling like I do, so I don’t know what’s going to happen in terms of my fight with Mike Pyle. I know what I want to do to Mike Pyle, I know what I’ve trained to do, but as far as the fight goes, I don’t exactly what’s going to happen. I’m just going out there to give it a hundred percent, and I’m going to tell the whole truth of my life in that fight. You’re going to see the whole truth and nothing but the truth.”