"I’m in good shape, I’m having fun again, and it’s a cliché, but you’re gonna see me aggressive, I’m gonna come after Thiago, and I’m looking to knock him out.” - Spencer Fisher 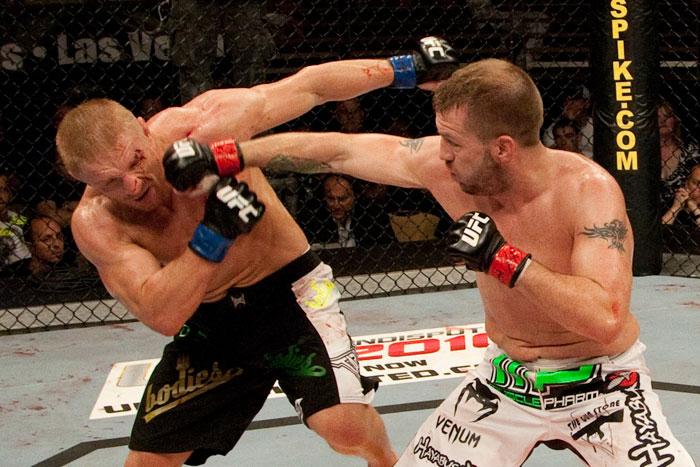 No matter how fertile your imagination, it would be hard to come up with a more interesting sight than a young Spencer Fisher performing Brazilian Jiu-Jitsu moves with his friends in his basement, complete with Portuguese accents.

“I’ve been a Rickson Gracie fan since Day One, and I used to try to emulate those guys when I first started watching the fights and I even developed a Portuguese accent as a kid,” laughs Fisher. “My buddy Gary and I, we would be in my basement and we would hold our hands like those guys did and we would pronounce things like ‘armlock’ like they would.”

Yes, it’s true. So it goes without saying that when Fisher sets foot in the Octagon in Rio De Janeiro this Saturday night against Thiago Tavares, he’s not only fighting for a win, he’s almost making a pilgrimage to a spiritual home of sorts when it comes to mixed martial arts.

“To tell you the truth, this is my dream,” he said. “It’s a dream come true to fight in front of those guys, and I’m very thankful to (UFC matchmaker) Joe Silva for giving me this chance.”

And what a chance it is. At 35, the native of Cashiers, North Carolina (which only had one traffic light when he was there) will fight in a packed house in Brazil against a hungry opponent looking to get back on the winning track in front of his home country fans. When it comes to pressure, high stakes, and an electric atmosphere, it doesn’t get any better than that. And though it may be the unpopular opinion if you’re in Brazil or a fan of Tavares, Fisher is ultra-confident that he is going to run the table on his fellow veteran.

“I’m feeding off of that (Tavares having the “homefield” advantage) because it’s all up to him to come out and fight,” he said. “I know his game like the back of my hand. I’m having everybody emulating him, and it’s easy to find guys that are Thiago Tavares. But there’s no way he’s gonna find another Spencer Fisher unless you go through the backwoods of North Carolina. (Laughs) I’ve got jiu-jitsu guys here, his chin is suspect, the cardio’s in my favor, and the pressure’s all on him. I’m gonna go out there, and he’s not making it out of round two.”

Fisher’s always been the confident sort, but perhaps adding to his certainty of victory is that his training camp has been augmented by a visit from an old rival of Tavares’ and of himself – fellow lightweight standout Matt Wiman, who knocked Tavares out in the second round of a Fight of the Night battle in 2008, and who was knocked out by Fisher two years prior.

“He is probably the nicest guy that I’ve ever met inside the cage as far as getting to know someone on a personal level,” said Fisher of Wiman. “His work ethic is top notch, and the biggest thing that’s disappointing about him is that he eats clean. He got me to start eating vegan patties, and I can’t believe it.”

Fisher laughs, but in the interest of Rocky III references, did the two ever clear out the gym and have a rematch behind closed doors?

“The day he left,” said Fisher, “the last round we got in there it was part two of our first fight. We were in there and we were throwing rocks. We should have charged admission for people to see that one.”

“The King” admits to getting a black eye out of that last sparring session, but more importantly his work with Wiman refueled a fire that was starting to dim a bit in recent years.

“Whenever I go out there and I fight somebody, I try to fight tooth and nail ‘til the end,” he said. “When I was a little younger, I could get away with doing things because my philosophy was, and it almost blew up on me, to go balls to the wall, be in great shape and the guys could take me down, but they would tire. But now everybody kinda caught on, they’re in good condition to keep going, so I kinda got away from that. But that’s what got me here in the first place and in my last fight I kinda got back to that a little bit. I was real aggressive and I put pressure on and it worked for me. In the end I got taken down, but I didn’t try to get back up like I should have. This time, we’ll see.”

Winner of three in a row in 2008-09 before back-to-back defeats against Joe Stevenson and Dennis Siver (with the Siver loss being a razor-thin one that many believed he won), Fisher defeated tough Brit Curt Warburton at UFC 120, but then lost a competitive decision to Ross Pearson in February of this year. The Pearson fight did show that Fisher was starting to get his groove back, and he promises even more of a return to his prime form this weekend.

“That’s something I kinda got away from, being aggressive, and I started calculating stuff and cutting angles, but for this fight, I’m still gonna cut angles, but you can bet your ass you’re gonna see flying knees and spinning back kicks,” he said. “Of course I’m always looking for the W, but more than anything, I want to give people their money’s worth. Whenever they watch a Spencer Fisher fight, I want them to say ‘damn, he hasn’t lost it, that guy is as hungry as ever and he’s as exciting as ever.’ And those are the kinds of shows I love to put on.”

If that tune sounds familiar, it was the mantra of the recently retired UFC action hero Chris Lytle, who walked off into the sunset in amazing style earlier this month with his submission victory over Dan Hardy. Fisher, who has no plans on leaving anytime soon, would love to carry on the work started by “Lights Out,” beginning this weekend.

“I’m a fan of Lytle and the guy does it again and again,” he said. “As for me, I’m the old guy, but with the old guy comes experience and everything gets better with age with me. Maybe I’m not as herky jerky or as fast as I was, but my intensity is there, I’m in good shape, I’m having fun again, and it’s a cliché, but you’re gonna see me aggressive, I’m gonna come after Thiago, and I’m looking to knock him out.”