As an energetic, athletic child, Holly Holm tagged along with her two older brothers on every daring excursion. Whether it was riding dirt bikes or building tree houses in the cottonwoods on their Bosque Farms property in New Mexico, Brian and Weston Holm always invited their little sister.

They enjoyed her company.

Holm has that girl-next-door look with blue eyes, blonde hair and easy smile, but she's not afraid to get her hands dirty. She spent her early years bonding with her brothers, and that's where her toughness was formed. You can see a tangible byproduct of those rough-and-tumble outings when Holm fights Ronda Rousey in UFC 193 Saturday at Melbourne’s Etihad Stadium.

The scar on the calf of Holm's left leg is the result of an adventure in which all three rode a butterscotch-painted 1975 Yamaha Enduro. The single-seat offroad bike wasn't built for a family, but all three thought it would be fun to share a ride until they lost control. Holm got the worst of the accident when the bike fell and the hot muffler struck her leg.

Part of the unwritten rules in hanging out with her brothers was that she couldn't cry and she couldn't tattle on them. But they all told their parents about that incident.

"All three of us were riding down a ditch bank and we hit some sand and wobbled," Brian Holm said. "The bike fell over. She was wearing shorts and the muffler got her on her calf muscle. She didn't cry. She jumped right up. It immediately bubbled. But she's just always been a little ahead of her years as far as being mature."

In a way, Holm had to grow up fast outside of Albuquerque because her father, Roger Holm, was a preacher. And thus, she earned the moniker "The Preacher's Daughter."

She was always under a microscope.

"I never had to make them do that," Roger Holm told UFC.com. "She's always had this free spirit. She was gutsy and was never afraid to try anything new. I never suggested, 'Why don't you take your little sister?' All three have always been really close."

Her peers and adults were constantly watching her, and that's probably why the spotlight as the opponent for the undefeated and immensely popular Rousey doesn't faze her.

She's leaning on her family for confidence, inspiration and support.

"My whole family, we're tight," Holly Holm said. "My mom and I meet for lunch a lot. It's a nice release away from everything. Just sit down and be connected with family. My brothers are my best friends in the world. Those relationships are so amazing. It was something my parents always instilled in us, that family would always be there for you."

She started her career as a kickboxer until the tutelage of Mike Winklejohn - who is still one of her coaches - before signing with UFC. She's fought professionally as a boxer, kickboxer and now as an MMA fighter. That wide-ranging repertoire could come in handy against Rousey.

It's difficult to see compassion and sensitivity with every punch and kick in the Octagon, but Holm is an emotional person. Her father's line of work helped shape her personality.

"I think it's a huge part of who I am now," Holly Holm said over a lunch of beef tenderloins and mint tea with reporters at the Palm Restaurant in Los Angeles recently. "I think a lot of people can get really lost in this world and that keeps me grounded. Even little things like being raised as a preacher's daughter, you're in everyone's sight. People are looking at everything you do under a microscope.

The 34-year-old Holm teared up as she discussed her childhood. You won't see those emotions in the Octagon but outside, she is comfortable expressing herself.

"I am an emotional person. I wear my emotions on my sleeve and anyone who knows me knows that," Holly Holm said. "When I think as a whole (about) just everything, the people who have supported me along the way, not only people supporting me but maybe people I've been able to inspire, it's awesome."

Wherever they were, there was always someone who wanted to talk to their dad. And that meant that Holly Holm learned how to be a good listener, too. Even with adults.

“Holly was 16 at the time. So that gal opened her whole heart and soul to Holly. She's always been that way."

Inside the ring and the Octagon, Holm uses her hands as a way to beat opponents. Outside, her hands are used for artwork, building, creating and working.

Just because she has an international fight with Rousey doesn't mean she's stopped those hobbies. On the contrary, building her own bedframe and nightstands from scratch and installing sod in her yard are her release.

Holm made coasters as a gift for Brian, and one says: "Let your faith be greater than your fears" and on another: "Seek first to understand & then to be understood."

Holly Holm is making news as the next opponent to try to knock off the undefeated Ronda Rousey (12-0). Holm - a bantamweight - is undefeated as well at 9-0, but she isn't a household name. She would become one if she became the first MMA fighter to beat Rousey.

Rousey has had an easy time dispatching opponents in record time, winning her last three fights by a combined 64 seconds. After Rousey beat Bethe Correia in 34 seconds, Holm tweeted: "Congrats to Ronda Rousey on another victory. Hard work has one again paid off."

Holm said she did that because she can appreciate a strong work ethic. She's passionate about what she does and she admires that in others as well.

They'll share a grand stage together in Australia, and undoubtedly, serve as an inspiration for others.

"I strive to be an inspiration to people, not just little girls or other women," Holm said, tapping the table for emphasis. "I want to inspire everybody. I don't want to be a letdown. I want to inspire people. Ronda is more of a strong, confident personality. I think that's good. I'm a little different. I'm not one to judge how anyone else is."

Holm presents a new challenge in that she started her professional career as a kickboxer and boxer. As a teenager, she took cardio kickboxing classes as a way to stay in shape. She started working with Mike Winklejohn and started fighting at 18.

She fights out of the Jackson Wink MMA Academy in Albuquerque, and UFC fighter Jon Jones is a mentor and has trained with her occasionally. She's picked his brain for advice. 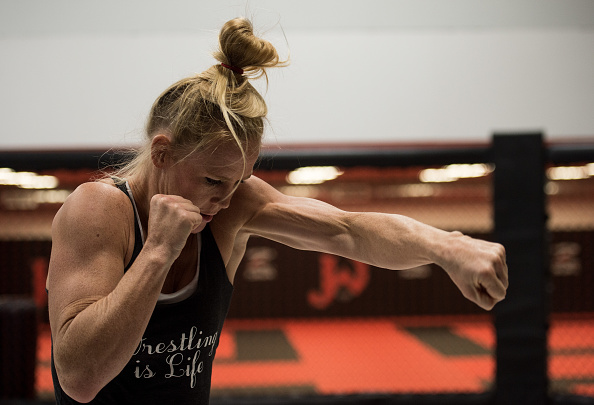 As for advice, everyone has given her tips in fighting Rousey, an opponent so many have asked when she'll fight since the moment she signed with UFC.

One man in a grocery store told her "You've just got to listen to me. Stick to boxing. Don't get caught in that bar thing," Holm recalled with a laugh.

The man was referring to Rousey's signature armbar move. Holm will try to use her strengths, too, but she said she's not afraid to go to the mat.

Some things have been put on hold for the fight for Holly Holm, like paperwork for her business selling homes. She has a real estate license and works with her father. They were scheduled to close escrow on a house six days before the fight, and Holly Holm had to make sure her father would take care of all the paperwork while she remained in training mode.

Still, she makes time for lunches and dinners with her brothers, mother, father and husband, Jeff Kirkpatrick. She took her father for his first pedicure recently. They usually won't talk about the fight, especially in the salon.

Her family will all be in Australia, cheering her on as the latest underdog in a fight against Rousey. Brian Holm couldn't imagine being anywhere else to support his sister, whom he's said is always there for anyone.

"She has always included everybody," Brian Holm said. "It gets me choked up thinking about it. She's always worn her heart on her sleeve. She stays very humble. She's just a joy to be around.

"... She's one of the most humble, loving people you've ever met in your life. She has been from the beginning. I'd like everyone to know that."

And where that scar on her left calf muscle comes from, too. A product of dirt bike riding in the ditch banks with her brothers in New Mexico. A stop on the journey that has landed her a date with UFC's star Rousey.

"I think this is going to be quite amazing," Brian Holm said. "This is kind of a culmination of her whole life's work to this point. I'm tickled to death to be a part of it. It's more than just a fight. She's wanted to do this for a long time.

“She's ready. I know it. There are going to be a lot of people who will be pretty shocked when it's all said and done."

Jill Painter Lopez is a reporter for FOX Sports West in Los Angeles. She was an award-winning, longtime sports columnist at the Los Angeles Daily News and has worked for Time Warner Cable in L.A. She is also a contributor to the New York Times. Follow her on Twitter at @jillpainter