The Special Relationship Between Justin Gaethje And Trevor Wittman

Over The Last Decade, Justin Gaethje And Trevor Wittman Forged A Special Connection
By Zac Pacleb, on Twitter @ZacPacleb • Oct. 31, 2021

Trevor Wittman has a keen memory about the first time he saw Justin Gaethje fight. He watched his future pupil compete under the Ring of Fire banner in 2011, where Gaethje quickly opened Wittman’s eyes to the fighter he’d become.

“I was blown away by his fighting style,” Wittman said. “He had picked the guy up and slammed him like I’d never seen before. It was so entertaining, and it wasn’t even from a striking standpoint. He didn’t really know how to strike, but his wrestling was so demolishing and fun to watch, and the way the crowd was into it, I was just blown away.”

Wittman introduced himself to Gaethje afterward, and from there, a special relationship began to form. Gaethje, who was still wrestling at the University of Northern Colorado at the time, would go down to Grudge MMA. There, Wittman started working with Gaethje for 10 or 20 minutes giving him some footwork drills to improve his striking. Wittman said he was hesitant to give Gaethje too much while he was still wrestling, but once Gaethje graduated from college, the two started working together full-time.

A self-described “visual learner,” Gaethje appreciates the way Wittman can not only tell him what to do, but show him what it should be like.

“He’s incredibly athletic,” Gaethje said. “What he’s showing us, he can do as good as us or better, probably. The way his mind works, I always like to say that he’s an artist, and we’re the canvas. That’s kind of how I approach it, where I really just trust in the guidance that he’s given me throughout the years.”

Over the last decade, the two have ascended to the highest levels of combat sports. Wittman is regarded as one of the top coaches in mixed martial arts, and, along with Gaethje, he corners strawweight champion Rose Namajunas and welterweight champion Kamaru Usman. Gaethje, meanwhile, has become an all-time fan favorite who earned the interim lightweight title in 2020. Although he failed to become the first man to defeat Khabib Nurmagomedov, he’s right in the thick of the shark pit of a title picture at 155 pounds.

All the while, the two men have cultivated a special bond, one that is understanding of the boundaries between a friendship outside of the gym and the coach-athlete dynamic when it’s time to get to work.

A Day In The Life Of Trevor Wittman

“The reason I’m still with Justin Gaethje is because he’s so coachable,” Wittman said. “He’s a pleasure to be around. He’s a great human being. He treats his fans, his family well. I love everything about him, and again, being coachable is key. You can work with athletes, and he’s one of those guys, I can tell him to do something wrong, and he’ll do it and say, ‘Yes, sir.’ That type of attitude and trust is what you need in a coach-fighter experience, and it’s a blessing.”

When they’re not sharpening “The Highlight,” Gaethje said the two hang out a lot outside of Wittman’s privately owned gym, time that includes weekly snowboarding trips and riding their Can-Ams around Colorado.

Gaethje said Wittman is the “king of dad jokes,” and Wittman admitted as much. When it comes to fight day, Wittman said he likes to keep things light throughout the day until it’s time to wrap his fighters’ hands.

When it comes to training, though, the two have maintained a seamless working dynamic. Even as the spotlight has become brighter and the paychecks have become grander, there hasn’t been any sort of wedge forged between the two. Anyone who has watched one of Gaethje’s fights that makes it to the second round (a semi-rare occurrence given his penchant for finishing) can see the clear communication and trust Gaethje has in Wittman. Perhaps the most notable example came in Gaethje’s win over Tony Ferguson for the interim lightweight title at UFC 248.

After Ferguson caught Gaethje with an uppercut at the end of the second round, Wittman brushed that moment to the side and told Gaethje to “take 10 percent off” his punches. As Gaethje gained momentum over the next two rounds, Wittman pulled his fighter back into focus as the last round approached, reminding him that the last time he got too comfortable, he got stopped. To that point, Gaethje simply replied, “twice,” referencing his losses to Eddie Alvarez and Dustin Porier. He stayed steady on the gas pedal in the final round, earning the stoppage win in what was maybe the best performance of his career to date.

Wittman shared the same sentiment (and the same joke) and added that the lack of dissent “means the world” to him.

“Outside of the fun and games, when he has something to tell you that he thinks will help you or maybe bring you back a little bit, he’s an honest person,” Gaethje added. “That’s a very hard trait to find where a lot of people wouldn’t tell you what you wanna hear. He’s an honest guy, and that’s why I have him a part of my business.”

There is a collaborative effort in Gaethje’s development when the two are in the gym, but one where the athlete defers to the coach. Wittman described it as Gaethje coming to him and seeing what he thinks about a certain thought or idea, and the two work from there. 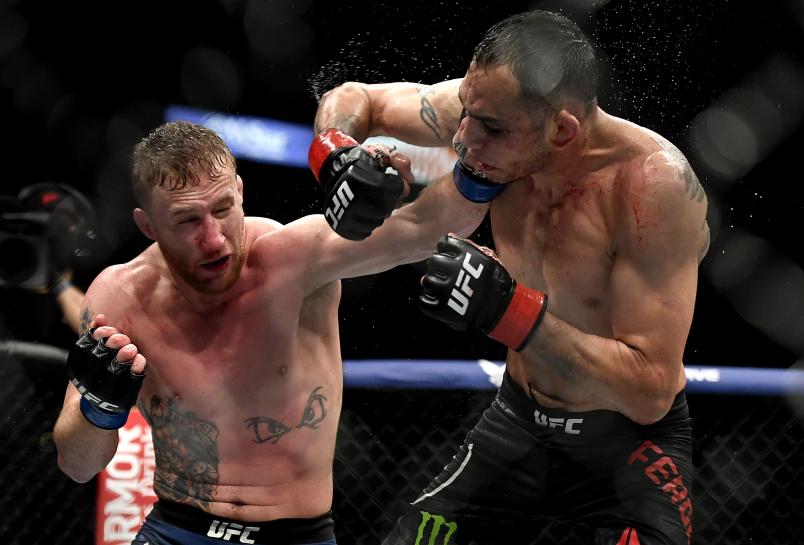 The formula has worked, and it has Gaethje on the cusp of undisputed gold. Wittman said seeing Gaethje raise the belt won’t mean much more to him because he is always happy watching his pupil win any fight, but he did go on to say he knows that level of success won’t negatively change who Gaethje is at his core.

“Justin knows everybody by name,” Wittman said. “He very rarely says, ‘No.’ When we were training in a bigger gym instead of a private gym, people ask him, ‘Hey, can you come over to dinner tonight? I got family in town. My uncle is in town. They’d love to meet you, Justin,’ and he’s like, ‘Yeah, what time do you want me to be there?’ He’s that type of guy. It doesn’t come from a ranking of going, ‘No, you’re giving me great sparring, and I owe you.’ He’s one of those guys – he’s raised in a small family in a small town, and when people are getting together, everybody gets together, and he is like that. If you need help moving, he’s going to come help you move and doesn’t want nothing in return. He’s that type of guy. That guy will do anything for you.”

It’s a little different for Gaethje, though. He cares, not only about proving that he’s the best in the world, but that Wittman earns his flowers as well. In an unforgettable clip, Gaethje was moved to tears when Namajunas defeated Joanna Jedrzejczyk to earn the strawweight title the first time.

A lot of those joyful tears were shed for Namajunas, but they were also for Wittman and the work they all do in the gym on a daily basis, and Gaethje is more than optimistic he’ll replicate that achievement for himself sooner than later together with Wittman. He can almost certainly cement himself back in the title picture at UFC 268 when he faces Michael Chandler in what should be an all-action fight. He is also the first of three athletes whom Wittman will corner in Madison Square Garden along with Rose Namajunas and Kamaru Usman.

“Trevor has been on this ride with me,” Gaethje said. “Ultimately, all of us want to do is be recognized as the best in the world. I’ve been very close. I’m close right now, so it’ll be a surreal feeling once I finally accomplish that goal.”