The Spark Reignites For Miranda Granger

The New Mom Has A New Outlook And The Old Fire Heading Into Saturday's Bout In Las Vegas
By E. Spencer Kyte, on Twitter @SpencerKyte • Aug. 2, 2022

When Miranda Granger found out that she was pregnant and her fighting career in the UFC was about to be put on hold, she looked to Mackenzie Dern as a blueprint for how she wanted to approach things.

At least that’s what she thought.

“When I first got pregnant, you only have so many people to compare it to, and so there was Mackenzie Dern, who came back like four months after having a baby, and in my head, I was like, ‘That’s going to be me! That’s what I want to do!’” said Granger, who gave birth to her daughter, Austin, on August 19, 2021. “After I had Austin, I didn’t want that. I just wanted to spend all the time I possibly could with her and soak in all those moments.”

As much as the desire to experience every moment possible with her daughter contributed to Granger not making a Dern-like hasty return to competition, becoming a mom also kicked off a period of deep, personal reflection for the Pacific Northwest native.

A life-long athlete, Granger, like so many others, tethered who she was to what she did, and her emotions and interactions ebbed and flowed with her efforts in the gym and performance in the cage.

“Everything about who I was, was all based off fighting, and it ruined some relationships with friends, took away from some relationships with family, got in the way of my husband and I; it overtook my life,” admitted the 30-year-old strawweight, who returns to action this weekend against Cory McKenna. “Having a daughter and stepping back, it’s like, ‘I’m so much more than just fighting.’ 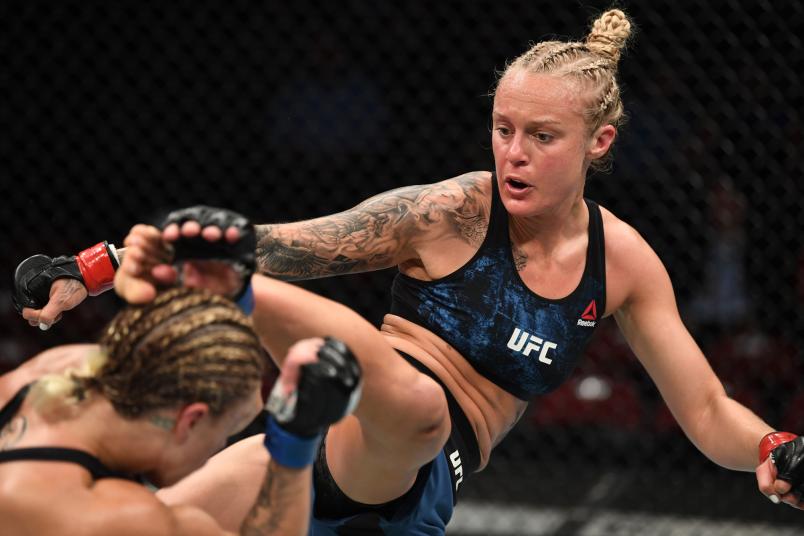 “I’m her mom and I’m a wife and all that stuff, but I’m also my own person and I’ve found myself in this journey. Yes, I want to win and yes, I want to make a name for myself in this sport, but who I am as a person is so different and so much more than a record or what I do in the cage.”

For some, separating who you are from what you do comes naturally, but for others, like Granger, it’s a process, and reaching that point can bring both clarity and a renewed focus.

Initially, Granger immersed herself in the clarity, taking the time to be a mother to a newborn, to give her brain and her body time to recover from the major medical event she went through last summer, and think long and hard about returning to competition.

When the UFC reached out to see if she was ready to return in April, “Danger” declined, recognizing that she was neither physically, nor mentally, ready to dive into a training camp.

“Mentally, I wasn’t ready to get into that mindset that you have to be in to get into the cage with someone,” said Granger, who went 6-0 on her way to reaching the UFC and won her promotional debut before dropping each of her last two outings. “The UFC offered me something in April and I just was not ready — not only physically, but mentally, I was just not ready to get myself into that place.”

A couple months later, however, something clicked. 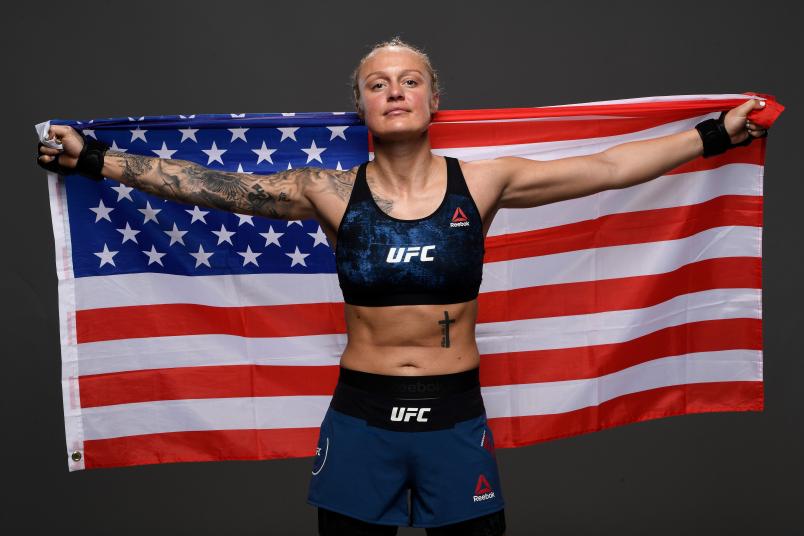 Miranda Granger poses for a portrait backstage during the UFC Fight Night event at the Prudential Center on August 3, 2019 in Newark, New Jersey. (Photo by Mike Roach/Zuffa LLC)

“There was a shift where I was like, ‘I can feel that bug again’ where I want that energy again and that’s when I knew I was going to reach out and let the UFC know I’m ready to start a fight camp,” she said. “I think I just needed to soak in all the moments with Austin and realize that she’s okay now if I have to leave and take periods of time for myself.

“I thought it (being a mom) was going to take away from my training because before I would go to the gym, hang out all day, have lunch there, train kind of all day, but now I can’t do that, so my training has been so much more focused and so much more driven in the time that I have,” continued the former CFFC strawweight champion. “I’m trying to get my first workout done while she’s napping, so I’m busting through that really hard because I have a short amount of time, and then going to the gym and doing the same thing.

“What I would do in six hours, I’m now doing in two hours, but I feel like I’m getting so much more out of it, such better work. I’m having to be so focused and short and direct because I know that I need to get things done so I can be home, be a good mom, and be with my kid.

“Luckily, Kaden, my husband, is such an amazing dad and husband; he’s stepped up so much,” she added. “He brings her to the gym and they watch me train sometimes, and he stays home with her other days, and I definitely would not be able to do it without him, so I’m very thankful to have that support. I don’t know what I would do without him.”

Saturday night, Granger will finally make that walk again, returning to face McKenna at the UFC APEX, fully aware of what’s at stake, but also looking at her circumstances as a chance to get back to being the fighter that earned finishes in each of her first six appearances prior to touching down inside the Octagon for the first time. 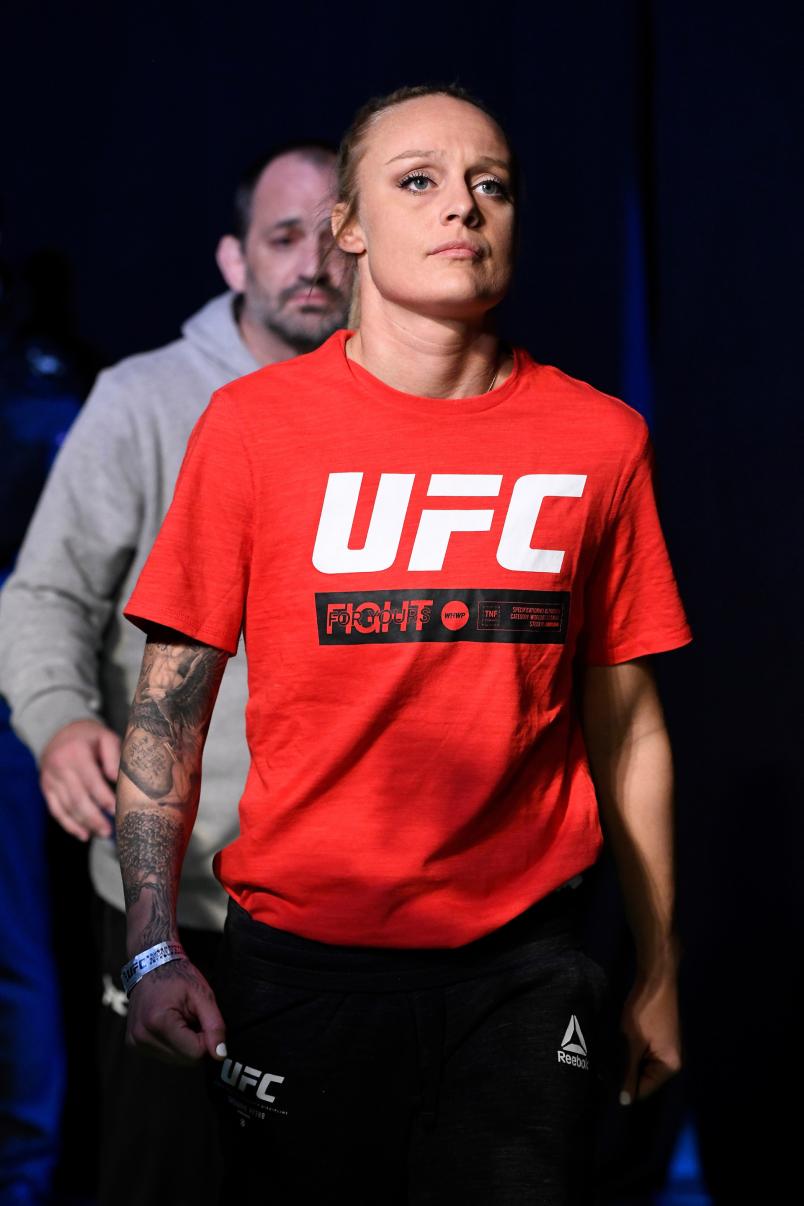 “Coming back on a two-fight losing streak, I have nothing to lose,” said Granger, who dropped a short-notice assignment to Amanda Lemos in Busan, South Korea, at the close of 2019 before landing on the wrong side of the cards against Ashley Yoder last time out. “I assume if I lose (this weekend), it would be the end of my contract, since this is the last fight on my contract.

“That’s pressure itself, but even if it were the first fight on my contract, I still want to win, so that’s no different.

“I just need to go in there and show everyone who I was to get to the UFC,” she said, sounding slightly annoyed that she hasn’t been able to do that as of yet. “Even in my debut that I won against Hannah Goldy, I wasn’t myself, so I just need that intensity, that drive, and that fire.

“If I show that, I don’t think that Cory will do well, but that’s all on me and I need to bring that.”

Nearly a year after becoming a mom and 21 months removed from her last appearance inside the Octagon, Granger is champing at the bit to finally get to make that walk again.

“My husband will catch me dazed off and he’s like, ‘What’s going on?’ and it’s just that I’m focused,” she said with laugh. “The spark has been reignited a little bit. That passion that drives me, that fire just feels like it’s back again, and I’m excited to get back in there, get back to doing this job.”