Souza ready to roll in Charlotte after returning from injury 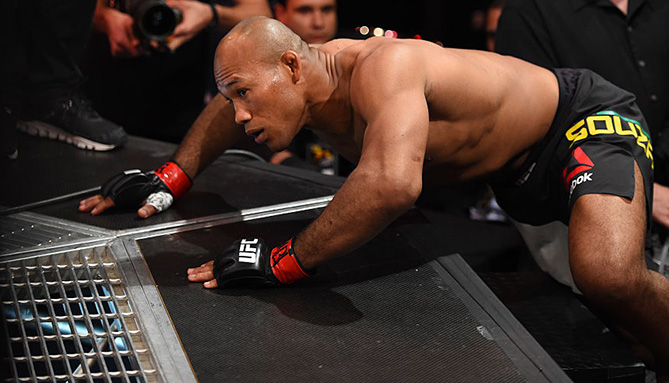 While the long wait to see the talented contender return finally comes to an end this weekend when he squares off with Derek Brunson in the main event of Saturday’s UFC on FOX show in Charlotte, North Carolina, there were moments during his time away when Souza wasn’t sure if he was going to continue his fighting career.

Shortly after the fight with Whittaker, it was revealed that Souza suffered a torn pectoral muscle in the contest. He promptly returned to Brazil and underwent surgery in Rio de Janeiro, but five months later, the 38-year-old was back in the hospital and going back under the knife.

“About five months after surgery for the pectoral, my appendix exploded,” said Souza Wednesday morning, speaking through a translator. “So I went to surgery and stayed in the hospital for about 10 days. I was really having some second thoughts about coming back to MMA. It was a pretty hard moment for me.”
RELATED CONTENT: Jacare on Road to the Octagon | Free Fight: Souza vs Boetsch | Brunson relishing opportunity to fight in Charlotte

After nearly a decade competing at the highest levels in the sport following an illustrious grappling career, the former Strikeforce middleweight champion pondered packing it all in. Two surgeries in six months had left him demoralized and the prospect of getting back into fighting shape after an extended stay on the sidelines felt daunting.

“It was pretty hard to go back to training,” admitted Souza, who kicked off his 2017 campaign with a first-round submission win over Tim Boetsch before falling to Whittaker two months later. “I was out of shape. I was fat. Getting back in shape was the hard part.”

Eventually, Souza made the decision to continue, got back in the gym and much to his surprise, everything started to come together quicker and easier than he had anticipated.

“I went through two surgeries and to be feeling good, feeling healthy and to go fight again is God’s will,” said Souza, who currently sits at No. 3 in the middleweight rankings and carries a 10-2 record over his last 12 fights into this weekend’s main event.

“I’m surprised the recovery was pretty fast, faster than I thought. I thought it would be more months that I would be out. I feel great. I did a great camp. I’m feeling ready to go and it’s going to be a great fight.”

Saturday’s pairing with Brunson is not only an intriguing contest between two of the top middleweights in the world, but it’s also a rematch, as the two squared off under the Strikeforce banner on what turned out to be the organization’s penultimate show.

At the time, Souza was working his way back into contention less than a year after losing the middleweight strap to Luke Rockhold, while Brunson had impressed in his first three outings with the company and was taking a steep step up in competition squaring off with the former champion.

Roughly 30 seconds into the contest, Souza planted a counter right hand on Brunson’s jaw, sending the Jackson-Wink MMA Academy representative crashing to the floor. As he staggered back to his feet, a grazing left hand from the Brazilian jiu jitsu ace put him back on the canvas, where Souza pounced and pounded out the victory.

Souza needed just 41 seconds to secure a victory the first time around, but a lot has changed since that initial encounter.

Brunson has gone 9-3 since matriculating to the UFC, including seven first-round stoppages and hard fought losses to two of the division’s elite – the current champion Whittaker and the man who will challenge for the interim title again next month, Yoel Romero.

His only other setback during that stretch was a controversial decision loss to Souza’s long-time friend and training partner, Anderson Silva, and the 34-year-old North Carolina native has since rebounded from that defeat with a pair of blistering stoppage wins over Dan Kelly and Lyoto Machida.

“The first thing that crossed my mind is that he’s a tough guy,” Souza said of Brunson when asked his initial impressions of the matchup. “I know he’s a different (fighter), but so am I. We’re both tougher than we were, so it’s going to be a new match.

It certainly should be.